To celebrate the first day of the new year and new decade, we took the family to Museum of Flight.

It was a fantastic experience, but I can’t get over this letter posted in one of the displays. 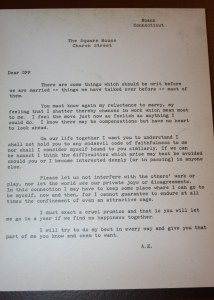 (click to enlarge)
A.E. stands for Amelia Earhart, a woman who has been routinely praised and criticized by aviation experts and biographers concerning her contributions to aviation, or her lack of skills overshadowed by media sensationalism.  Either way, she was a woman, she was a pilot, she was successful and unfortunately, she disappeared.
Her personal life has been rumored, but I don’t value rumors. When  I read the above letter Earhart typed and handed to her husband on their wedding day, rumors became fact.  I learned she had no qualms about saying that she does not believe in faithfulness in marriage and she feels marriage is a cage. She wanted nothing to come in the way of accomplishing her goals, an admirable trait, but at a tremendous cost.

Now, I have a hard time holding her up as a hero to my daughters.  She championed some women’s causes, but failed in areas of womanhood that I hold important, based on the Word of God.

She wasn’t rejecting America’s standards for marriage, she was rejecting the Lord’s. He set boundaries on marriage, one man to one woman until death, asking for purity beforehand and  faithfulness during.  This isn’t old-fashioned, it is obedience to the Lord, and is meant for our blessing. By rejecting His standards, the Bible, she is also rejecting Him.

The Lord doesn’t set boundaries because He is withholding what the world craves as freedom, their rights, their pleasure, their choices or their way, He does it because marriage is a beautiful representation of Christ and the church. Christ loved the world, died for the world and a union with Christ, by salvation through faith, will not be broken.
I am always saddened when I read about her disappearance.  I never rejoice in the hardships or the death of anybody, whether or not I agreed with their lifestyle.
But as I sit, pondering about her life and death, I am speculating about her marriage, her true happiness, her inner peace, her struggles and  her joys. I wonder, in those last few moments, if she had any regrets.  As her plane spiraled towards the ocean, or as the Japanese hauled her into a cramped jail, depending on which theory you believe, if she changed her mind about any of these values and thought about the loving God who patterned those rules based on His holiness and His omniscient knowledge of what is best for the children of the world, spiritually, mentally and physically.
I can speculate about her death as people have for decades, but this I know for sure – if she called on Him, He answered.
Jeremiah 33:3, “Call unto me, and I will answer.”
Psalms 50:15, “And call upon me in the day of trouble: I will deliver you, and you shall glorify me.”
These promises are still true for us today.  We can call and He will answer.
Share
Pin
Tweet
Email
Print