Because we live in an area where fireworks are legal,
4th of July is a HUGE neighborhood event. 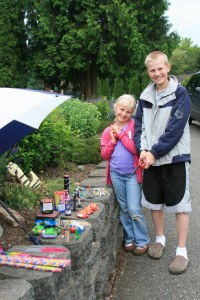 We even broke down and bought some sparkly,
smoky things for the kids.
For the rest of their lives they are going to hear from the older kids,
“WE never got fireworks when WE were your age!”
Yea, but when they were young the fireworks were like light ammunition.
No more firecrackers or bottle rockets.
You have to try really hard to burn yourself on these tamer models. 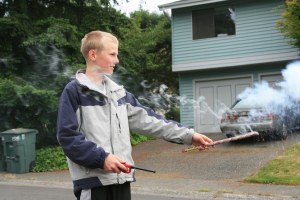 Of course, the kids can’t wait until it is dark enough
to shoot off the fireworks.
We didn’t need to drive to the city fireworks display,
enough neighbors had their own show. 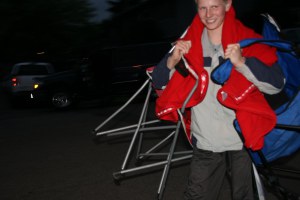 We found a spot down the street where we could watch
about six displays at the same time.
Jon rollerblade back for chairs, snacks and a blanket. 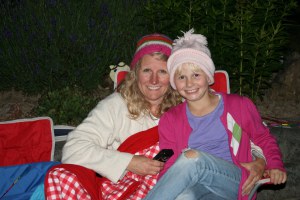 Yea, a blanket, on top of my sweater with a hoodie.
Never had a 4th where I had to wear a hat and snuggle in a blanket.
It was SO cold!
But, it was so fun.
While we were OOHING and AAHING over the beautiful patterns in the sky,
Jon said, “I wonder how many people are thinking about
our independence from England tonight,
or if they are just thinking about their fireworks?”
I know I was.
“Those who won our independence believed
liberty to be the secret of happiness
and courage to be the secret of liberty.”
Louis D. Brandeis
“You cannot build character and courage
by taking away man’s initiative and independence.”
Abraham Lincoln
And when I think of the historical joy of our national freedom,
I can’t help but think of my spiritual freedom.
I was once a slave to sin,
but I’ve been set free through faith in Jesus Christ.
Yes, in the United States we are able to celebrate
our independence from England.
But, is your soul truly free?
John 8:36
Therefore if the Son makes you free,
you shall be free indeed.
Share
Pin
Tweet
Email
Print