Just before midnight on Thursday, we were surprised to hear a loud noise. An unfamiliar noise. A “what in the world is that?” kinda noise. It was too loud, too near and too prolonged to be an airplane breaking a sound barrier. It wasn’t the neighbors. My husband stepped outside to take a look and saw lightening. Of course. We haven’t had a good ol’ storm for so long, we had forgotten about those exciting rumbles of thunder that give you enough time to run and get your camera.

As if a dump truck had backed up over our neighborhood and dumped its entire load ferociously, we were deluged. Growing up in the Midwest, I love a good storm. For some reason, it makes me feel excited, safe and adventurous all at once. It’s about the closest experience we have to a pioneer adventure. 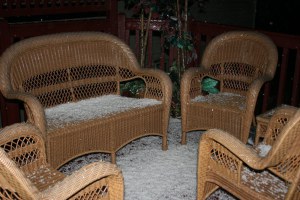 By the time I took off my lens cap and focused, the furniture was covered. 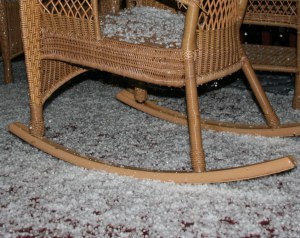 It was so loud, I was amazed all my kids stayed sleeping. I guess it takes a much more impactful noise to wake them, like the unwrapping of a candy bar or the popping open of a bag of potato chips. 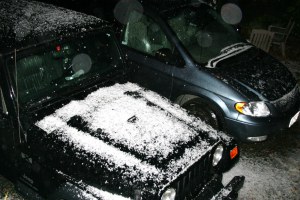 Running through the living room, I could hear the hail pinging on the grate inside my fireplace. I opened the front door and set off the alarm. 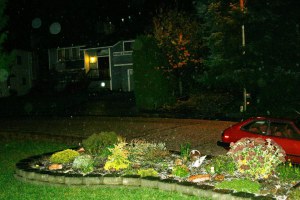 But, I had to get a picture. My little built in flash didn’t quite cover the distance, but you can see the entire street is covered. Orange hail? No, that is cedar bits shaken loose with all the hail. On each side of the street, we had a little river flowing along the curb.
Then, within about five minutes, it was over.
.
Reading the news later, I discovered earlier in the day there were 40-58 mph winds in surrounding regions, a funnel cloud, lightening strikes and many severe thunderstorms.
.
Today we had more bursts of high wind, rain and hail, followed by glorious sun-breaks.
.
You know that over-used cliche, “if you don’t like the weather, stick around, it’s gunna’ change”?
.
It’s true.
Share
Pin
Tweet
Email
Print