This was NOT a posed picture. This was my grandson, Brayden, shortly after birth, stretching out, chillin‘ out and enjoying the heat waves on the warming table. He was warmer than a three hour old McDonald’s hamburger. 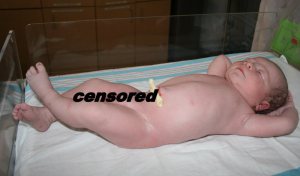 This is still his favorite position. Contrary to all those expensive, glossy-covered, child-rearing books, this little guy does NOT like to be swaddled. He likes to be stretched out along your arm, just hanging out like the dude he is.

This pose just shows his nature. He is a contented baby and instead of crying when he is hungry, he snuffles through his nose, unless you make him wait too long. Can’t you just see him someday calmly driving across a busy bridge while his wife is yelling, “I have to push!”? 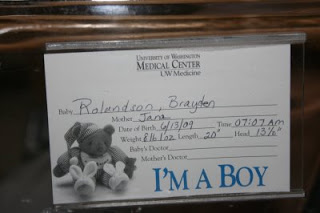 Because I am an absent minded old gramma, I forgot to provide all the details about my favorite grandson. In an email I sent announcing his birth, I didn’t even include the birth date, let alone those other statistics women crave. Women utilize those height and weight measurements as bragging rights as aggressively as fishermen. The only difference is, a woman’s baby stays the same size with each telling, a fisherman’s catch gets bigger. Granted, a woman’s labor may increase in length as the story is repeated, but at least the baby always stays the same size.

I guess I can’t tease my husband anymore. Throughout our two decade marriage, he has been famous for sharing baby news this way.

Mindy – “That’s so exciting, what did they have?”

Mindy – “I know that, was it a boy or girl and what did they name it?”

Scott – “Um…lemme remember…I think it was a boy?”

Scott – “What does that matter?” 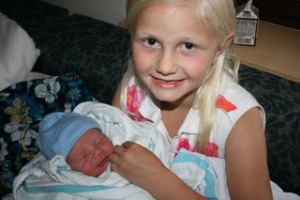 To add to the excitement, we have a news flash from Auntie Rebekah, his 6 year old aunt. Two days ago, his “extension cord” fell off. There ya’ have it. Whole lot of braggin’ going on around here.