I dug ferociously and furiously, the shovel melting in the soil, as if my life depended on the task at hand. Maybe it did. The treasure had to be dealt with before my presence was discovered.   I dug silently and steadily. Too many demands would be placed upon my hands and the secret must remain a secret.

Invigorating youth was regained as I became one with the shovel.

The clanking sound and the sudden stop of my shovel bred excitement.   My fingers dug greedily into the soil, only to reveal a small rock I threw in the discard pile. Disappointment does not fuel ambition, so I pushed on with pure determination to finish the task.

Another clank. My shovel was a detector of only small metamorphic creations. 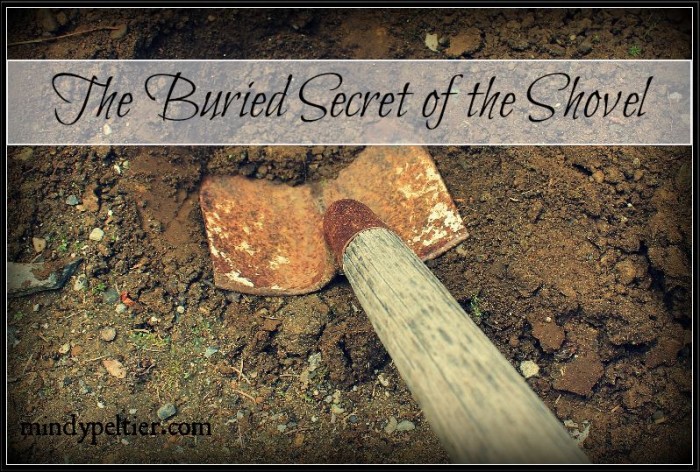 I jumped on the shovel again and again. I could picture the dirt trail made by sweat dripping on my aged, disappointed face. The wrinkles betrayed my true age.

Distant sounds of humans who weren’t trying as hard as me to mask their presence made me increase my digging tempo. I tried to judge the mood of the posse by the tone and pitch of their voices. Were they coming as one against me, or coming as a split group, where I could play on the weakest member for my freedom?

The shovel was no longer an extension, but a hindrance to my goal. I couldn’t shovel fast enough, deep enough. Time crossed the line from friendship to enemy territory and I plowed through the soil with inevitable defeat.

I no longer cared if I was found. The treasure had to be buried, no matter the personal cost of discovery.

The hole finally deep enough, the bounty was placed into the crevice and quickly buried. I stomped around, added more soil, and brushed bits of cedar and decayed leaves around to hide the new soil disturbance.

I strode away from where X marked the spot and met the voices head-on with newfound boldness. I still might escape suspicion. They clamored to reach me first, their hands grabbing at me.

“Where have you been?”

We’ve been looking for you!”

The shovel in my grimy hands confirmed the suspicion glaring in their eyes.

“Oh, Mom, were you planting your new flowers instead of making us lunch?”