Look at me, I match!

I had advice from a friend, Bev, to dress “fun” and “artsy” and to NOT wear a suit to my writers conference. I was relieved to find out I could wear jeans. To me, dressing up is jeans without holes and a shirt that doesn’t have baby urp or paint stains. Oh, and my shoes, belt and jewelry need to match. Thank you to my Winzer kids for the matching dangly black and silver earrings. They were perfect! 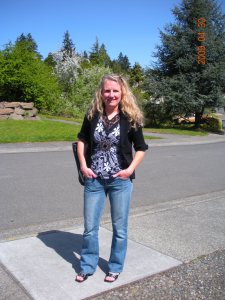 Unfortunately, my sandals have $3.99 written on the bottom in metallic gray permanent marker, thanks to some employee at Value Village. Until I remember to use the Goo-Gone, I will always have to sit crossed left over right so the price doesn’t show.

I was wearing a beautiful filigree ring with a large stone as I left the house with fear and trembling, but in matching clothes. I was so excited to have painted nails and this cool ring and I imagined my hands looked like a writer’s hand should look. Within one hour of arriving, I looked down and noticed the huge stone was gone and I was left with a filigree ring with an ugly dab of glue.

As my friend Barbie later sympathized in laughter, she stated, “That is always the way it goes, you want to look like a million bucks and you end up looking like $.59.”

Lesson Number One learned during my writers conference –
Do your homework before meeting with an editor!
I thought I had effectively researched the editor/agents that would be available and what their companies published. I didn’t realize that because they are PUBLISHING a genre, doesn’t mean that they are PURCHASING that genre. Neither of the two companies I was interested in associating with are aquiring historical fiction.
Because I don’t have a completed manuscript, it wasn’t a great loss. However, I still wanted that eyeball to eyeball contact with an editor. I actually wanted him to stare into my eyeballs so he didn’t see the dirt under my fingernails and the sweat under my arms. I was nervous.
There were approximately eight of us in a room with the Terry Glaspey, Director of Acquisitions from Harvest House Publishers. Each had 3-4 minutes and their initial “pitch” was to be 25 words. Some didn’t know that. It was a little nerve-wracking when someone talked too long, threatening the opportunity for others. I found it slightly amusing that they didn’t realize that each minute they went over, they were taking a minute from somebody else. Must be the Mommy in me, desiring everybody to effectively take turns. Several others didn’t do their homework and gave a pitch for a product Harvest House wasn’t buying.
I also thought it was interesting that as soon as some opened their mouths, I found myself thinking, “I wouldn’t buy that book!” How would you like the job of listening to rooms full of writers who all think the Lord told them to write their book, but you know it is a book that nobody would ever buy except the writer’s mother? People confuse the Lord’s presence while a Christian is writing with the Lord inspiring each word. He only did that with the Holy Scriptures. We humans need to be edited and challenged and corrected, but not all writers grasp this concept.
The whole process was fascinating to watch. Since I didn’t want to pitch a book that I knew they would never buy, I threw together a quick pitch based on a title from my “jot list” of ideas for books. “Do as We Say, Not as We Did” would be written by parents gutsy enough to admit their parenting mistakes to a younger generation of parents. It’s a book I will probably never write, but I wanted the opportunity to see what rejection feels like.
Glaspey was gracious and encouraging, but kindly stated that parenting books put you in the arena of competing with people like the Dobsons, and that people want to see a ministry first, then the book. That was that. I was the last one and with that we all walked out of the room, our few minutes of glory over. We all were rejected. But, we all didn’t feel that way. Some he directed to another publisher who might purchase their genre. To another he suggested blogging as an outpouring for her written prayers. To another he complimented the idea, but felt it was too gritty for Harvest House, as they are one of the most conservative publishers. He had something kind to say to everyone. He turned them all away without dashing hopes or inspiration. I was blessed just to watch him at work.
Later, I considered his disappointment as we all walked away, most of us unprepared and/or unpublishable. His job is to acquire manuscripts, and our group didn’t make his job easier that day. Editors and agents want to help writers, they want to buy manuscripts, that is their job. Like a newsreporter with that cliqued nose for news and the desire to sniff out a new story, I believe they want to discover that new writer. We all love a good book! They also need to. They need to sell books. It’s their business.
The process of getting a book published today is different than it has been in the past. The majority of writers are “found” through contacts at writers conferences, where you have opportunity to meet the editors face to face. Manuscripts sent in unsolicited go in a big pile. A big “slush pile” they don’t touch. You in the midwest know how useless slush is. It isn’t fluffy enough to play in, it isn’t melted enough to add to a water source. It just sits there, thick, gray and useless. They encourage you to make an internet presence with blogs, Facebook, etc.
Other great things I learned at the Conference…..
Share
Pin
Tweet
Email
Print