Yeah, the Lord created ears  to hear.
We know that.

The hearing ear and the seeing eye,
the LORD has made them both. 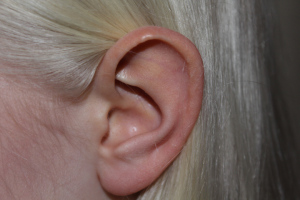 Husbands don’t always know that.
Well, husbands know ears are for hearing,
but I’m pretty sure they have a shut-off valve wired in their ears.
They know HOW to use their ears,
they like to decide WHEN to use them.
Little kids are obvious when they’re  ignoring you.
They keep their head down and
concentrate on their book, their toy,
or whatever they deem more important
than the avalanche of words falling off your tongue.
A husband isn’t so obvious.
He’ll smile and nod,
giving  monosyllabic words of affirmation,
so you think he’s listening and agreeing.
It’s only later when you reaffirm plans,  go spend the money,
or plan an outing,  he’s busted.
Then the wife begins the quizzing, the drilling, the accusations.“You never listen to me.”
“What did I say about _______?”
“Who did I tell you called today?”
“When are we going out to dinner with the Smiths?”
As a young bride, I was devastated.
I had envisioned an adoring husband clinging to my every word.
As a young groom, I’m pretty sure he was devastated, too.
I don’t think he envisioned having a young bride
who could talk the hind leg off a mule (name that movie)
and expect him to remember
every.
single.
word.
I learned a few things early on.
There are good reasons why a man doesn’t listen,
and each wife has to figure out what turns the shut-off valve
in her husband’s ears.
Once we both learned to apply what we knew
about communication, it became easier.
I’ve even trained the kids to look for that glassy look
in Daddy’s eyes that tells them
the porch light’s on,
but nobody’s home.
Daddy might see lips moving and hear noises,
but he might not be listening.
He might still be at work.
He might be balancing the budget.
He might be planning a trip to Hawaii.
(Ya’ never know, it could happen again!)
They are to politely and respectfully get Daddy’s attention,
first his eyes,
then his ears,
then they can talk.The Lord used a different method to make a man hear.

I haven’t tried that.
I thought about demanding a hearing test, but spitting is out of question.

Prior to this healing, the Lord commanded three times in Mark
“If any man have ears to hear, let him hear.”

I can joke about my husband’s ears, but mine are no different.
The words go in the ear canal, but not always into the heart.
That’s why the Lord had to give us this command.
He knew His people would have trouble listening to His Word.

Glassy-eyed,  we smile and nod our way through the Scriptures,
the words tickling our eardrums, but not impacting our lives.

We  should be that eager bride hanging onto every Word,
doncha’ think?

Hey, are you listening to me?