The bigger you dream, the harder you fail.  If you dare share your vision publically, you fail publically. Some of the world’s greatest ambition has been tomatoed by public mockery and shame.

Take this quiz.  How well acquainted are you with these men who dared to try? 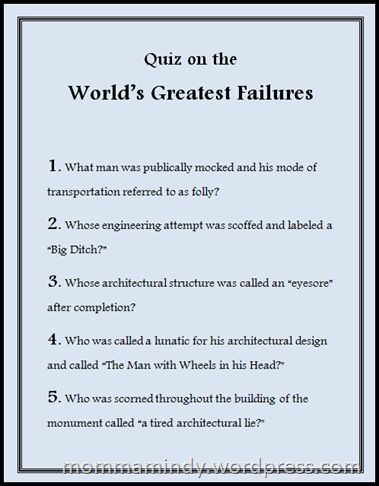 These men were tormented to their faces, behind their backs, in newspapers and in public forums. The only thing bigger than the opposition they faced was their vision to create.

For those of us with unfulfilled life passions and visions, what motivates us beyond the fear of failure? The hope of success.

Let’s see how well you identified these Feats Labeled Failures by public opinion.

1.  In  1807, Robert Fulton’s steamboat Clermont traveled up the Hudson River from New York harbor to Albany, NY. The folly was the first steamboat used with commercial success and sparked the beginning of steam navigation around the world.

2. The “Big Ditch” is now known as the Erie Canal and Governor Dewitt Clinton’s digging was not in vain.  The Erie Canalway National Heritage Corridor honors and preserves it as one of the most important works of civil engineering and construction in the United States.

3. The “eyesore” is more commonly called the Eiffel Tower and Gustave Eiffel’s architectural wonder is synonymous with romance and France.   It is eye candy to over six million visitors each year.

4. George Washington Gale Ferris, the man with  wheels in his head,  sketched his dream for friends over dinner one night.  Introduced at the World’s Columbian Exposition in Chicago, The Wheel carried over a million and a half riders who raved about this experience the rest of their lives.  Those wheels no longer churn only in his head, but on the five major continents in the world, where they’re still trying to build bigger and better Ferris Wheels for thrill seekers of all ages. 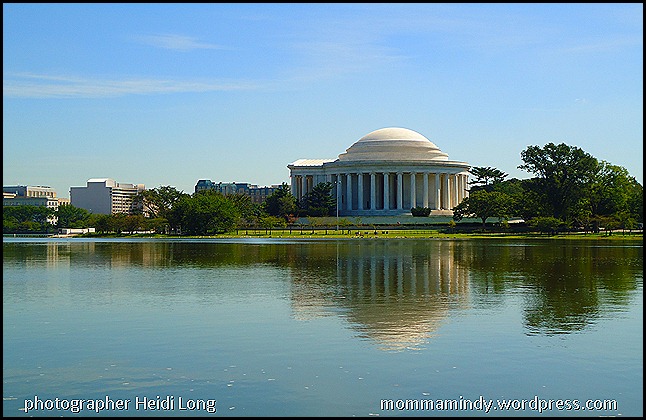 5.  Architect John Russell Pope didn’t live to see the completion of the Jefferson Memorial, but his vision, when completed, silenced the voices of dissent and daily inspires Americans.

You might not have known the opposition these great men faced, but you know the fruit of their work and how generations have benefited from their tenacity.  They ignored the voices and fulfilled their passion.

Even in Christianity, inspired people are mocked by those who should be supporting them.  The woman who performed the greatest act of worship was criticized for her waste.

Matthew 26
7 a woman came to Him with an alabaster vial of very costly perfume, and she poured it on His head… 8 But the disciples were indignant when they saw this, and said, “Why this waste? 9 For this perfume might have been sold for a high price and the money given to the poor.”

The Lord Jesus defended her and told the disciples her deeds would never be forgotten.

10 But Jesus said to them, “Why do you bother the woman? For she has done a good deed to Me. 11 For you always have the poor with you; but you do not always have Me. 12 When she poured this perfume on My body, she did it to prepare Me for burial. 13 Wherever this gospel is preached in the whole world, what this woman has done will also be spoken of in memory of her.”

The other women brought their anointments too late.  Jesus was no longer in the grave.  The disciples didn’t bother coming at all.  This woman  believed the prophecies and prepared her Savior for burial, while fingers pointed and voices scorned.

This woman and these men were only failures in the eyes of their contemporary critics. History does not view them in that same light.

We hear those same voices of mockery and doubt, along with another voice.  That voice of the enemy who was defeated at the Cross and wants us to live defeated lives. We passionately desire to use our gifts and abilities to serve the Lord and to impact the present and the future. What springs up within us should not be silenced or stilled. We must accomplish the burnings of our hearts in answer to the calling  from the Lord.

Do not listen to the voices of mockery on the outside, the voice of doubt from the inside or the voice of the enemy. Hear the Voice that is calling you to serve Him with the gifts He gave you.

Dare to leave your mark of faith on the landscape of history.