It’s not enough that we eat cold cereal for breakfast, 160 bowls  or 101 pounds per year per person, according to Cerealizing America.

We coat it with butter, Season-All salt and Worcestershire Sauce (how DO you say that anyway?) and it’s a snack.

We mix it with butter and melted marshmallows, squish it in a pan with our bare, buttered hands,  and it’s a desert.

Crumble it up and throw it on a casserole and it’s dinner.

String it on yarn and it’s an edible craft.

We Americans love us some cold cereal.

We also love us some Chex Mix.

It’s a salty tradition that balances out all the sugar we devour during the holidays.  And it’s healthy, right? Right? 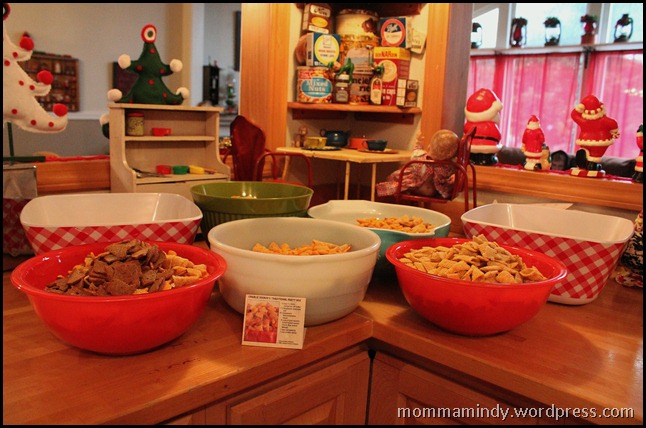 We go big or go home, as Jon,  my teenage son, would say. It’s easier to dump everything into lotsa bowls, then just crank the batches through the microwave.

Since you just need 10 cups of stuff, I don’t always follow the recipe.  I love adding Bugles and Goldfish Crackers.  This year I added tiny Triscuits and little rye crackers. I use mixed nuts, cashews, or dry roasted peanuts, depending on sales.

We make enough for drop-by company or impromptu movie nights and store it in Ziplocs in fridge or freezer. 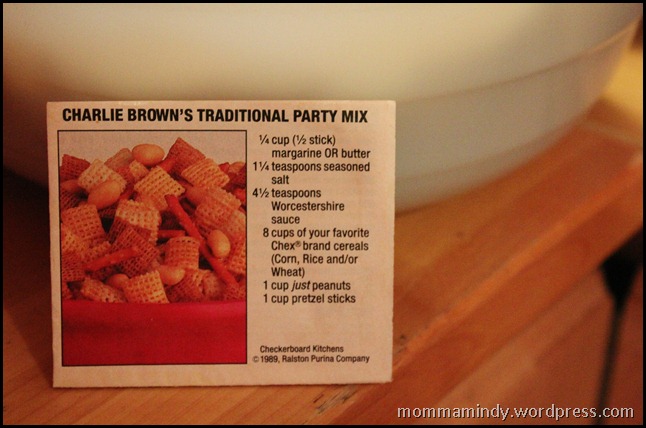 This recipe came in a little cellophane wrapper in a box of Chex cereal, and is almost as old as my marriage.  We’re all still happily together. The online recipe is a bit different, although they claim it’s the original. 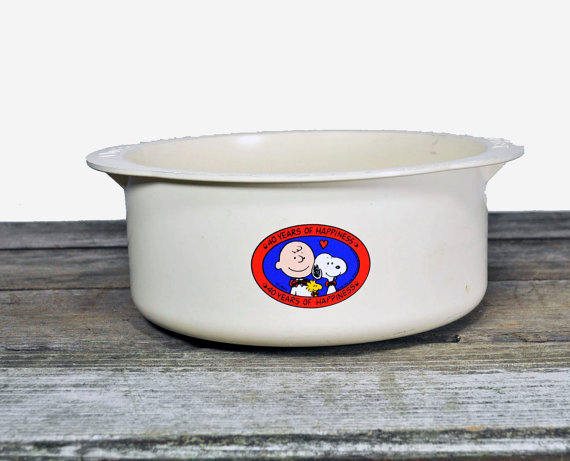 I saved box-tops and sent for this treasure in 1990, a microwave safe bowl designed in honor of Peanuts’ 40th Anniversary.  I used it every year until I burned a hole right through the bottom. I found this beautiful memory  in Tracy’s Etsy shop, Upscale Yard Sale.

When my sister-in-law, Nita, gave me the turquoise Pyrex bowl in the first picture above,  a new tradition was born.

This year I needed a new tradition for serving my salty cold cereal for a holiday work party hosted in my home. I’ve used mini take-out boxes in the past, but I wanted something reusable. 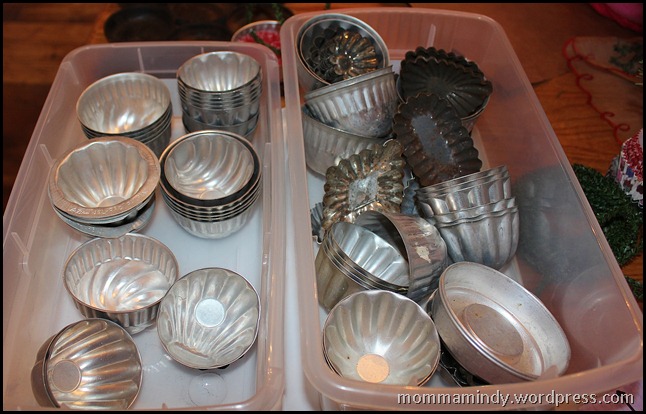 I guess I’ve been buying these things for awhile. The flatter ones are Sandbakkel molds, a Norwegian cookie I should make, but never have, and some are mini Jello molds. 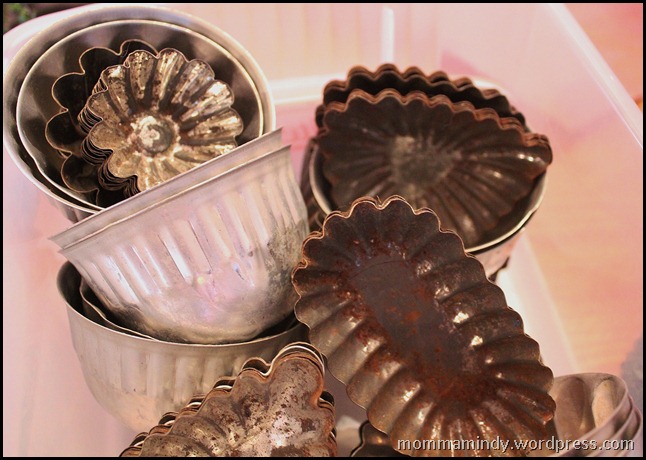 Those of you that like rusty, chippy things are drooling with jealousy now.

Those of you that don’t like rusty, chippy things are saying, “EEWWW!  Why didn’t she just throw that garbage out?”

Rabbit Trail Alert — I’m thinking those little flowers on the upper left would look great nailed onto something, or added to knitting needle stems or….what would YOU do with them? 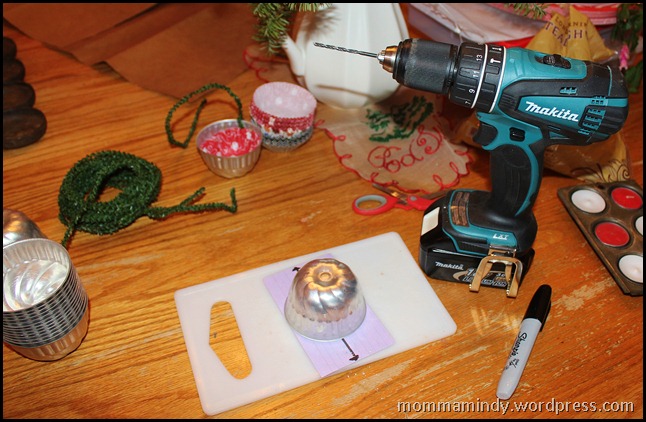 I was gunna’ be all impressive and use my Geometry skillz to perfectly cut holes on each side of the tin cups.  But, I discovered a lined index card with a black line worked just fine.

The tiny green wire garland was bought to make something for my daughter’s dollhouse a few years ago, but obviously, I never got around to it. I had to climb up into the scary attic and find it in the Christmas stuff, because I’m crazy like that when I have a project burning a hole in my pocket.

They need to change Murphy’s Law to Mindy’s Law.  Of course, I had to hit my head on a nail in the attic.  Why did they use nails six inches too long to pound the roof on?  It’s like a torture chamber up there.

Then, after drilling 50 holes with my trusty Makita drill, I realized little bits of metal were still clinging around the edges.  I didn’t want my company to eat metal, so I took a small paring knife and cleaned out each hole.  I was glad I remembered to wash them, because I bought them all at the thrift store and garage sales.

Then, I discovered the green trim was shedding little bits of stuff after I cut the ends.  I had to de-fluff the green stuff by running it through my fingers and shaking the stuff on the floor for the kids to clean up. 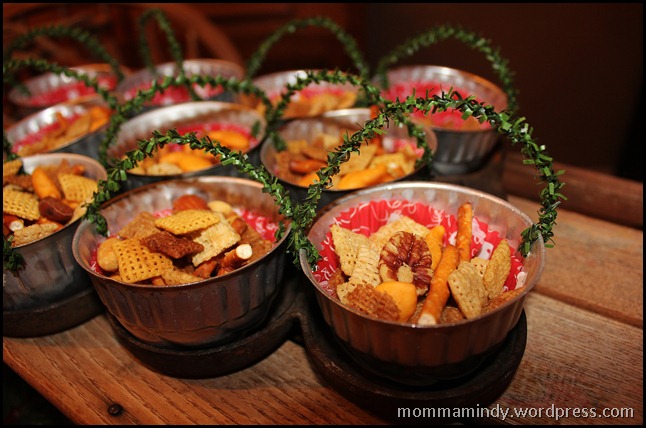 I used festive cupcake papers, ya’ know the kind I don’t usually spend the money on because I’m so cheap frugal, and turned them inside out to line the tins.

They really needed something added for a decoration, but I was out of time.

What would you add? 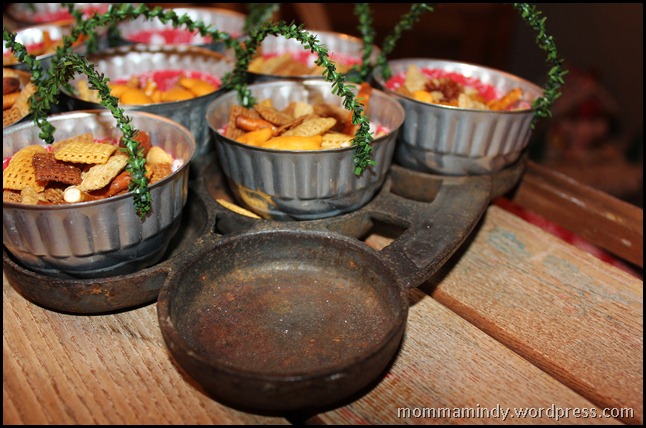 They were served in an old, rusty cast iron muffin pan.  ‘Cuz, when you invite your husband’s boss and team over for a party, you really wanna’ serve them in rusty, vintage stuff.

It’s a tradition as American as Chex Mix.