Like many who’ve barely survived a spiritual winter season, I felt a deep need for hope.
With a compelling desire to create a Resurrection garden in my front yard I  watched anxiously for a sunbreak. Two times the sun broke through the clouds  and I was able to work in the garden without interruption.
That actually was two separate and distinct miracles.
Sun in spring.
No interruptions.
Hallelujah! 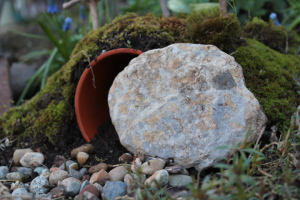 As I dug around in the dirt, planting, planning and praying I began thinking about the disciples. It must have been hard for them to view the Crucifixion and see their Savior buried in a tomb.
Of course, we know the end of the story, so it’s easy to be frustrated with their lack of belief.
The LORD told them He was going to be crucified.
He told them He would He would be in the grave for three days.
He even told them  He would be resurrected.
He told them everything they needed to know
to endure the coming tribulation.
As they watched the story unfold,
they should have remembered.
But, they didn’t.
They scuffled their feet on the dusty roads, their faces downcast, their hope shattered. They went back to their lives, broken and forlorn, doubting everything they’d seen for three years.
We shouldn’t mock their disbelief, as if we have superior faith, because we have far more physical evidence of the Lord’s promises than they ever had.
We have 27 books in the New Testament.
We have the indwelling Holy Spirit.
We have hundreds of years of Christian examples.
We have thousands and thousands of Christian books.
We have Christian movies.
We have sermons available with modern media devices.
We have ways of communicating with believers all across the world. 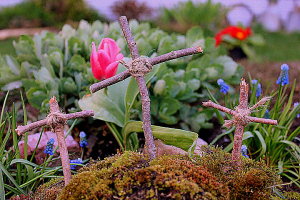 We have no reason to doubt the Lord.
We, of all people, should believe the promises of God and walk in the power of the Resurrection.
But, we’re just like the disciples,  walking through  our trials downcast and forlorn. We focus on the darkness inside the tomb,
and not the glorious light outside.
~~~from tree to tomb~~~
The inside of the tomb represents the place my sins and my trials went with Jesus. He took them upon Him, and took them to the grave.
For awhile, I forgot about the resurrection power. I was hovering near the tomb, weeping. 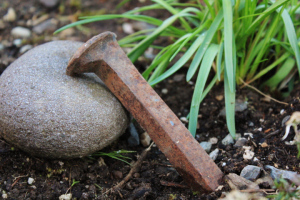 I could only focus on the  pain, and not the coming power.
~~~from nails to newness~~~
He overcame it all when He rose from the grave through the power of the Holy Spirit, and he wants us to walk in that same power.
He doesn’t ask something of us without enabling us, so He filled us with the same Holy Spirit at salvation.
As I filled my fingernails with dirt and cleansed my heart from dirt, I thought of a sermon I heard as a young believer by Tony Campolo called, “It’s Friday, But Sunday’s Coming.”
If we  have placed our heartaches, pains, sufferings and trials at the Cross,then we should look up with expectation,not look down in rejection.
Because, dear believers,
It’s Friday,
and Sunday’s Coming! 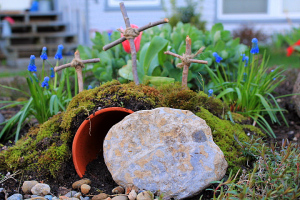 Romans 6:4
Therefore we are buried with him by baptism into death:
that like as Christ was raised up from the dead
by the glory of the Father,
even so we also should walk in newness of life.