My young daughter asked me a deep question during a  discussion about Jeremiah Small, a Christian teacher in Iraq who was killed March 1, 2012 by one of his students after opening the class with prayer.

“Why do you always say martyred instead of murdered when you talk about Jeremiah?” 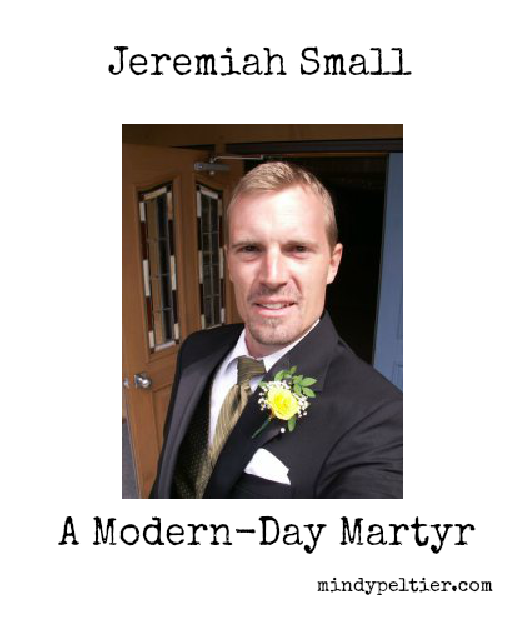 Our family was touched by the martyrdom of Jeremiah Small, a man known to our family since he was in his early teens. Yet, I cannot pretend that our pain is anywhere close t the loss his very loving, close, faithful family is feeling.

We met him at Box T Bible and Saddle Camp in Hurdsfield, ND, a camp run by Florence and Lewellyn Tewksbury. My husband was the Bible teacher for many summers. Even as a young man, Jeremiah’s faith set him apart from the other campers. Since the Bible camp was on a farm, every afternoon the activity was farm work. Some weeded.  Some cut firewood. Some shoveled manure.  Some branded calves. I spent hours with him in the garden pulling weeds and picking his brain about his upbringing and his personal faith.

Based on Jeremiah’s life, I figured  his mom, a homeschooling mother of seven, must be doing a great job, so I plied Jeremiah with questions. My kids were young and I knew I had much to learn. Jeremiah later returned as a counselor.

Ten years later, when our family moved to Washington, we learned the Small family had also moved there to work at Shiloh Bible Camp. I was thrilled to finally meet the parents of this amazing young man. His parents have continued to prove faithful through the death of their son.

The martyr and the shooter were memorialized together. Dan and Becky Small, along with four of their children, stood on stage with the family of the student who shot their son.

They hugged the parents of their son’s murderer. There was nothing fake or phony about this action, their searing pain did not hinder them from acting as a Christian should.

That is amazing grace.

It’s also amazing that Jeremiah was the first Christian memorialized in a mosque.

An article was written about this preemptive love that shocked a land used to vengeance and hatred. They had not expected the family to come bury their son with love and forgiveness.

The original news reports like to emphasize there was an argument, anybody who knew Jeremiah for more than 15 minutes, knew he was incapable of that.  Others may argue with him, but he would listen patiently and give a calm answer. A truthful answer, an answer that would never tickle ears or deny the Lord, but he would answer graciously.

Here’s an article that describes the events that led up to Jeremiah being shot.

Jeremiah’s family accepts his death in the same way he lived his life, with strong faith, a victorious testimony and a growing love for their Savior.

A beautiful tribute  was published by the Kurdistan Tribune, and written by a student who is grieved that a man who came to serve, was killed by one he came to serve. Read “What It Means to Kill A Teacher.” (Article taken offline April 2018)

Jeremiah was only 33 years old.

Who does that remind you of?

This is another student’s tribute, but it includes some scenes from classroom. Skip from 54 seconds to 1 minute 13 seconds is blood bothers you.

John 12:24
Unless a grain of wheat falls to the earth and dies,
it cannot bear fruit.

May much fruit come from the death of the Lord’s precious saint, Jeremiah Small.