We were in Seattle, and as usual,
a massive accident changed our driving plans.
Since the three police cars and the four cars kept us from turning left,
we turned right.
It had to have been a sign from the Lord, the kids assumed,
when they saw the Krispy Kreme sign ahead. 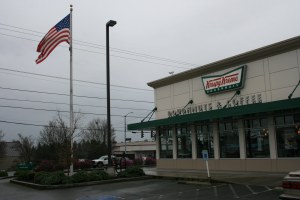 Yes, we stopped.
If the Lord went to all that work to cause an accident
just so I would drive past a place to treat my kids
– to high cholestorel, cavities, high blood sugar,
and enough fat to begin clogging their arteries –
then how could I say NO? 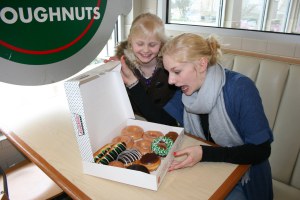 Grace is shocked.
We haven’t had donuts in years.
We occasionally get them instead of a birthday cake.
We’re not big cake eaters, either.
Especially since I learned cancer feeds on sugar.
The kids always want to feed my cancer. 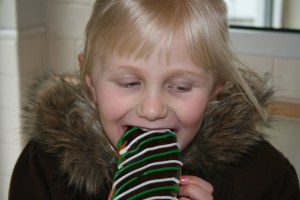 Of course, colored stripes make them taste better.
I have this love hate relationship with snacks.
It is fun to buy your kids treats.
It is convicting knowing they are eating
something with no food value. 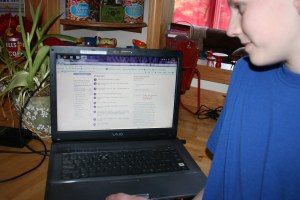 Once they were all gone,
and it didn’t take long,
Jon still had an urge for Krispy Kreme donuts.
I didn’t want to drive back to Seattle.
He looked on the internet. 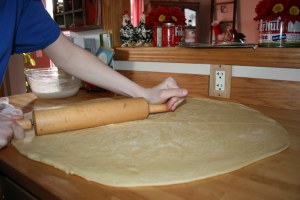 He found a recipe.
He mixed the dough.
He rolled out the dough.
The rolling pin was a wedding gift
from Gramma Else. 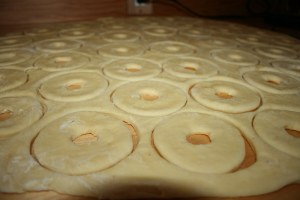 He cut the dough.
Antique metal cutter from a garage sale.
I didn’t even know I had it in my collection.
I bought it cuz it was old and cool.
I certainly never intended to use it. 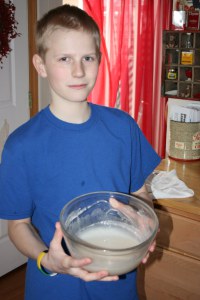 He made the glaze. 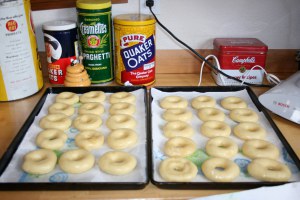 Then he deep fat fried them in canola oil on the stove. 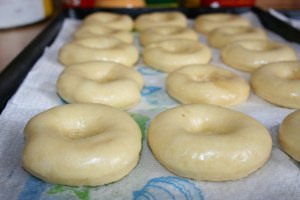 You pat them on paper towels,
then dip them in the glaze.
Are ya’ droolin’ yet?
There aren’t any left.
They tasted nearly like Krispy Kreme donuts.
Jon thinks he’ll add a little more sugar to the donut recipe next time.
It was an astounding outcome for a first time recipe.
That’s my boy – the Krispy Kreme King!
Share
Pin
Tweet
Email
Print