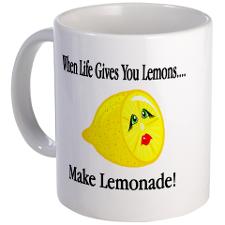 It sounds cute on a mug, in a card or when you say it to someone else.

But when life really isn’t going well, it can be downright trite and annoying.

Last week I actually blustered to my husband, “I’m SICK of making lemonade!”

So many things had continuously gone wrong, I was beginning to feel that nothing was ever going to go right again.

When we had to be displaced out of our home for a week, we begged our insurance company to let us stay in a hotel with a pool.  They agreed.  After a few days of frantic packing and getting house ready for construction crew to come put in new hardwood floors in two rooms, we arrived at the hotel to find the pool…

They were adapting it to meet code.  Because we were told it would only be a few days, we didn’t find another hotel room.  For the next five days we were  told it would be open –

“tomorrow morning,” then
“maybe by noon,” then
“we’re shooting for tonight.”

Car starter issues, missed phone calls, mis-communications, missed deadlines  and memory lapses added pressure to the week.  I just began to expect if I needed something I wouldn’t find it, if I needed it to work, it wouldn’t and that if it could go wrong, it would.

I felt like I was trying to juggle eggs while six playground bullies hurled me around on the merry-go-round.

Right after I whined to  my husband,  my heart rebuked me.

Everything in a Christian’s  life is caused or allowed by the Lord. He is the vinedresser.  If He chooses to give me a harvest of lemons, then I need to make lemonade, instead of just having a sour attitude.

The Lord reminded me how to make lemonade with the lemons in my life.

You add water and sugar.

Water in the Scriptures speaks of the Word of God, as a saving and cleansing fountain in our lives.

He wants to lovingly use His Holy Word to cleanse my heart from sin and make me more like the One whose Hands bear the marks of His dying love for me.

Ephesians 5:26
“That He might sanctify and cleanse her (the Church)
with the washing of water by the word,

He wants us to draw near, the way you love to pull your children into your arms.

Hebrews 10:22
“Let us draw near with a true heart in full assurance of faith,
having our hearts sprinkled from an evil conscience
and our bodies washed with pure water.”

One you’ve squeezed those lemons and added the water, it is only lacking the sugar, the sweetness that miraculously compliments the tang of the lemon and produces a flavor that is pleasing and thirst-quenching.

What is sweet in the Scriptures?  The essence of Jesus Christ in a believer.  Born-again Christians give off an odor to the world around them.

2 Corinthians 2:15
“For we are to God the fragrance of Christ
among those who are being saved
and among those who are perishing.
That sweet smell, a New Testament sacrifice, reaches the Throne of God.
Philippians 4:18
“…an odour of a sweet smell,
a sacrifice acceptable,
well-pleasing to God.”
Guess what I am going to make with
the sour experiences of life,
the water of the Word
and the sweet aroma of Christ?