I have had cancer for five years. Without invitation, it became a part of my daily life. Sick people have to get used to this intrusion. 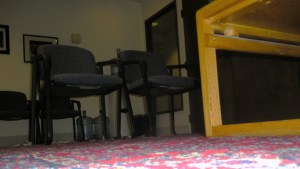 They also have to get used to doctor’s ugly waiting rooms. I find they don’t try to offer much hope in way of decorating. They obviously haven’t read all those studies on colors that calm anxious patients. However, you can still end up spending a lot of time staring at a silk ficus tree decorated with dust, four leftover red velveteen Christmas bows and one tiny snowman abandoned in the middle branches, IF you are waiting a long, long, long time.

When I took two pics today of the waiting room, I caused a ruckus with the three administrative assistants behind the chest-high counter that divides Sick People from the Well People.

“Yea, it was back-to-back lightening. I told you that storm was coming.”

“Are you sure it was lightening?”

“Yea, I’m sure. That storms a’ coming.” Since the meteorologist wannabe sounded so authorative and confident to the other two, I didn’t want to steal her thunder.

I quickly shut my camera off and dropped it into my purse before I caused panic. We have learned that people on the west coast are afraid of lightening. People who grow up in the Midwest and can’t afford fireworks love lightening.

I had to find other ways to occupy myself after that while waiting. Sick people have to get used to this, too. 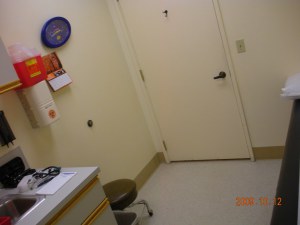 I moved into the exam room. Boring pictures, right? This is part of a sick person’s world. Plain rooms that smell stale and old and have old magazines you’ve read or new magazines you don’t want to read.

I noticed one orange drip down the cupboards.
I noticed scuffs along the doors.
I noticed there wasn’t any of that fun sanitizing foam to finger paint with while I was waiting.

The waiting is hard. You can either conjure up too many fears or battle fears down with denial or sit with calm resignation and trust, watching the door.

Dr. G arrived with a warm smile and friendly greeting. She remembered our phone conversation. My visit was at least one and a half hours. A record! She asked many questions and took a few pages of notes.

She took about six vials of blood. I don’t like needles. Sick people have to get used to needles. I don’t like this part. She is testing all the necessary thyroid things, along with hormone levels and vitamin levels. She ordered a bone density test and a sonogram of the lumps that were NOT removed during my April surgery.

Dr. G. asked me to come back in two weeks. TWO WEEKS? That’s a record. Some of my previous docs booked out 2-3 months.
She called me by name.
She was kind.
Her assistant is nice.

I think I could get used to this.

But, next time, I’ll bring my own magazines.