In my heart, I’m a North Dakota girl. I was born in Valley City, ND and graduated from… 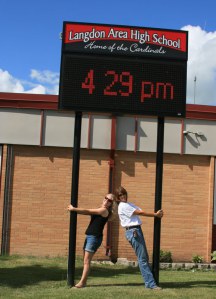 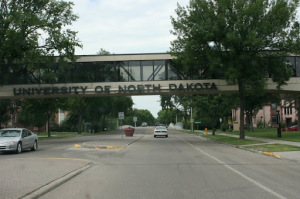 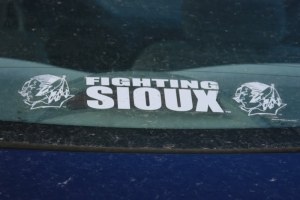 GO FIGHTING SIOUX!
Three of my children were born in Fargo, #1, #5 and #6. In between I’ve moved around, but have lived there 22 years, a little less than half my life.
Some things have changed, others haven’t.
The countryside around Highway 1 traveling from Lakota to Langdon used to be picturesque farmland.  You’d see acres of wheat, wheat, and more wheat.
There’d be a rock pile on the corner of each field, but otherwise, crops as far as the eyes could see.
That isn’t what you see anymore.
This is what you see along the ditches. 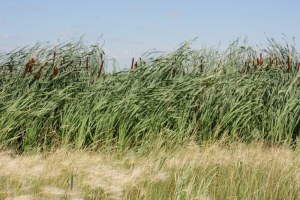 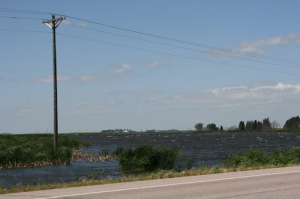 And this.
There’s cattails everywhere because there’s water everywhere. Duh, you might say.
But, this isn’t a lake, it’s one of many flooded fields. There’s been an increase in precipitation, obviously.
Lakes and rivers are threatening towns and homes across the state as they expand beyond their normal boundaries. 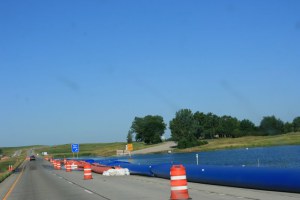 Even  Interstate 94 the west side of the state is threatened. 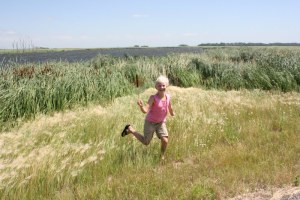 Back to the cattails.
Beka was so thrilled to see her first real-live cattail we stopped at an approach and played quietly in the ditch for a minute.
You can do that in North Dakota.
It was one of those “city girl meets the country” kinda’ moments. 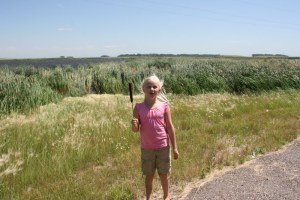 Holding her cattail like a corndog while trying to stand upright in the wind. 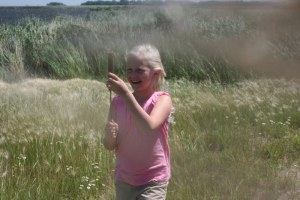 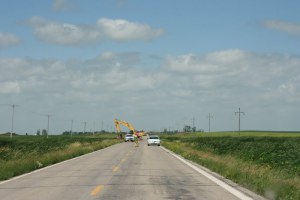 Another thing that doesn’t change in North Dakota?
Road construction.
All the metal culverts rusted out, they’re replacing them with concrete culverts. Or would that be cement?
I don’t know, but I know the new ones won’t rust out. 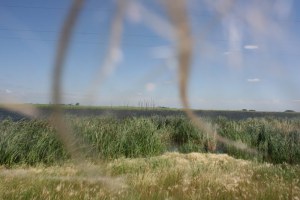 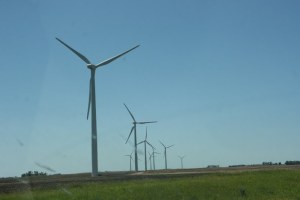 Wind farms are springing up across the state, generating energy and a little revenue for the landowners. 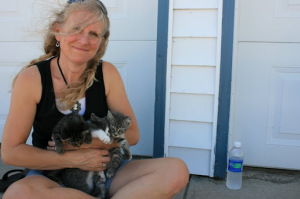 As far as bad hair, 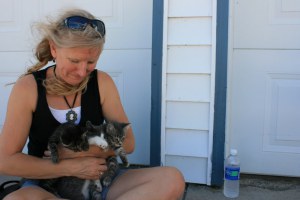 there’s no solution.
Sadly, there’s no solution for the water issue yet, and it’s only getting worse.
Ya’ know that whole thing about when life gives you lemons…
and
if you can’t beat ’em, join ’em…
Well, I think I have an idea.
Didja’ know you can eat cattails? One expert claims they’re a cross between zucchini and cucumbers.
North Dakotans could harvest the cattails and open up restaurants with delicacies like
…and all the restaurants would be floating restaurants, hovering over the flooded farmlands.
Everybody would be elegantly dining on sumptuous cattail delights, watching the hypnotic whirl of the wind towers, listening to the gentle lap of the waves against the building, while having a really, really, really
bad hair day.
Share
Pin
Tweet
Email
Print