Clothed In Christ
Part One in a Series
*****

I don’t like getting rid of my old clothes.

I like them.
They’re comfortable.
Usually, I don’t get rid of something until someone else says something. 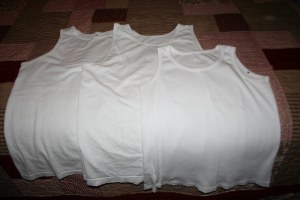 “Mom, did you know I wore that shirt when I was a freshmen in high school?”
She’s been out of high school for a long time.
.
These three tank tops to wear under shirts were all hers,
purchased her freshman year for $.25 each.
Yes, I got a bargain.
Yes, after about 8 years, we got a lot of mileage for them.
Finally, with a little prompting, I cut them up for rags.
My daughters are good to point out the obvious.
“Did you know you have a hole in that shirt?”
“M-AAWWWM, you need new clothes!”

Old  and New is a theme in the Scriptures, too. The Old Man is the depraved flesh we were born with and the New Man is the spiritual creation we become when we experience the new birth through faith in the Lord Jesus Christ.

These old shirts also went through several of my daughters before I adopted them.  Wow. What was I thinking?  I had to finally admit the obvious, they needed to go.

We also need to admit the failure of the old man, the flesh we were born with.  It needs to go.

We  take off the old man through salvation – by trusting Jesus as our Savior.

Romans 6:6  Knowing this, that our old man is crucified with him, that the body of sin might be destroyed, that henceforth we should not serve sin.

Then, daily we take off our dirty clothes and put them in the laundry hamper to be washed to be used again.  Our flesh is no different.  Daily we take off the Old Man by confessing our sin.

Ephesians 4:22 That you put off, concerning your former conduct, the old man which grows corrupt according to the deceitful lusts, 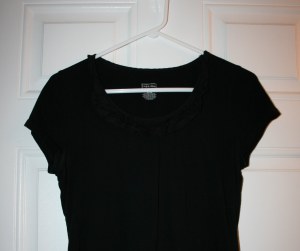 Every one loves new clothes. I bought simple brown and black t-shirts to replace the old ones. They have a little simple, ornamental detail, but were new.   I bought a new pair of jeans with no holes. (More to come on holy, holey jeans!)  Over time I bought a few nice jackets and even a few sets of matching jewelry.

Ephesians 4:24, “put on the new man which was created according to God, in true righteousness and holiness.

Keeping the wardrobe up needs daily attention and action.  If I don’t keep purging my closet and replacing old items with new ones, I would eventually return to the same state I was in before – clothes destined to be rags.

We must  put off the old and put on the new.

Both actions are necesarry.  If we only put off the old, and didn’t put on the new, we would end up….well, um….remember the Emporer’s new clothes?

If we just kept putting on the new, we would end up with a disaster, the closet would be so full, we eventually wouldn’t know which clothes were wearable, and we wouldn’t be able to find anything.

Spiritually, we must do the same.

The old man, the flesh we were born with, has to be taken off.  Through Jesus we put on the new.

We must do both.

What’s behind the door of your closet?

What’s behind the door of your heart?