Usually, if you just say the word “puke” to another mom, you get instant sympathy, empathy, consolation and prayer.  It’s one of those duties of motherhood none of us realized we were signing up for.

Most kids have that uncanny knack for losing their cookies in the worst possible scenario.

Saturday, like too many other people, we decided to use part of the sunshiny afternoon to drop off unwanted items at the Goodwill.

The line wrapped around the side across the entire front of the store.

I used my time wisely. I read a book. Jon was staring out the window. Rebekah was sitting in her booster seat in the middle row of the mini van.

Then, I heard a noise. A funny noise. That kind that sets a Mom’s senses at Fight or Flight status.

It was a bit of a gurgle. Like when a kid is going to throw up. Only, I knew a 7 year old would have been able to voice complaints about a tummy ache, or even identify that they were going to throw up. I turned around and she was spitting a little, and still gurgling.

She said, “Mom, I swallowed a quarter.”

The van was in park, so I opened my door and opened the sliding van door.

There was still drool coming out of her mouth, and in her hand she held a slimy quarter. I started grabbing wet wipes and tissues, cleaning her up.

Again she said, “Mom, I swallowed a quarter.”

I looked at the quarter in her hand and wondered why she was so panicked still. Meanwhile, I glanced through the parking lot, wondering if I needed to yell for a doctor or a nurse. I was trying to remember if the Heimlich was the best way to dislodge something from the throat.

She started retching and I grabbed a blanket that was in the seat next to hers. Thank the Lord for a cold, wet baseball season, the van was filled with blankets. Meanwhile, the automatic door was shutting on me, over and over, as I tried to help Beka and fight back the beast of the door.

As she threw up into the blanket, I noticed something shiny in the vomit.

Immediately I began saying, “Thank you, Jesus. Praise you, Jesus.” Although my heart was pounding and I wanted to sob over what could have been, I had to rejoice and let the kids know what a miracle they had just witnessed.

Knowing we had a long drive home and nobody could stand the smell, I brought the stinky blanket to the back of the van, opened it up to pull out more blankets. I knelt on the ground, tying the offending blanket inside other blankets. As I worked on my knees on the ground, I was overcome with worship. I kept thanking the Lord for sparing my daughter.

Rebekah kept apologizing for throwing up, but I kept telling her that is what saved her life. She felt horrible for throwing up, the puke made me rejoice. (For the first time in parenthood, I’m pretty sure!)

I marveled that our bodies are “fearfully and wonderfully made,” ( Psalm 139:14) and her created body knew just how to react with a foreign object.

Later, I read on the Internet a child’s esophagus is only the size of a nickel. This was a quarter.

For the next few days I was sore from the huge bruise on my legs, and smaller bruises on my arm and elbow. 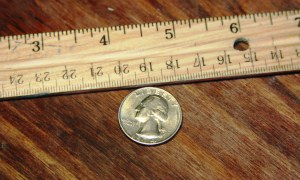 But, every time I see that quarter sitting on my desk, I feel no pain.

Just praise and worship, because puke saved the day.