Every summer begins the same way.
We tackle the deck.
Like a high maintanence woman,
it always needs something.
It has to be touched up,
fixed up
and/or nailed up.
Running the length of my house on the second story,
it is glorious extra square footage
to a home that always seems too small for my
rambunctious family. 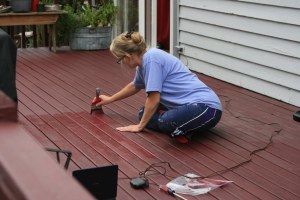 This year was the big year.
After power washing,
we put on two coats of  paint stain.
I’m hoping and praying that next year,
we’ll be able to just touch up the stain,
instead of repainting the whole thing –
again. 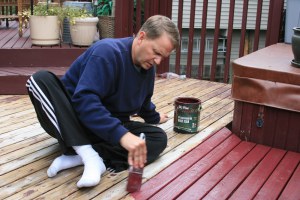 We’re like a tag-team when it comes to home projects.
When one is getting tired, the other has a burst of energy.
After I had painted for hours,
Scott came home from work and painted
while I watched the paint dry.
Except for this unusually wet and cold spring months and June,
we spend hours on the deck.
We eat on the deck.
We sleep on the deck.
We play on the deck.
We read on the deck.
We visit on the deck.
We play games on the deck.
Washington is great for moderate temperatures
and NO BUGS.
Yea, that’s right, no bugs.
I still marvel that you can have a picnic without flies.
I still marvel that swarms of mosquitoes
don’t hunt us down as the sun sets.
That’s why we utilize the deck for months.
But, there are miles to paint,
before we sleep.
******
The best remedy for those who are
afraid, lonely or unhappy
is to go outside,
somewhere where they can be quiet,
alone with the heavens, nature and God.
Because only then does one feel that all is as it should be.