Early in parenting,
I had a hard time discerning when my kids were “naughty”
and when they were “just being  kids.”
To me, it all seemed naughty.
Smearing Vaseline all over my bathroom?
naughty
Shaking a whole container of baby powder around the green shag carpeting?
naughty
Biting baby brother’s toes and leaving a dental imprint?
naughty
Writing all over my Bible with a green permanent marker?
naughty
Gluing the pages of Job together in Daddy’s Bible?
naughty
Some older, wiser friends lived in a beautiful older home with their four kids.
Their four year old son had taken a permanent black marker
and carefully drawn  X’s and O’s
all over the brick fireplace in the master bedroom.
Apparently, he’d been watching older siblings play Tic-Tac-Toe.
Appalled, I asked the Mom, “Did you spank him?”
Equally as appalled she answered, “No, he didn’t know any better.”
She went on to explain that it wasn’t naughty
because he had never been told “No.”
It was the first time he had written on something
and he did it out of curiosity and new-found skill, not rebellion.
At that point, he needed correction.
He needed to be taught the correct behavior.
Once a child was aware that the behavior was wrong and they repeated it,
then they deserved to be corrected AND disciplined.
I was always thankful she took the time to explain that to me,
although to this day she probably thinks I am a horrible mother.
She would be happy to know I am a very understanding Gramma. 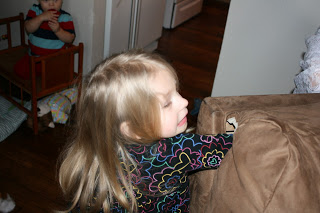 Brookie had found a small hole in my couch,
and decided it needed to be big enough to fit her arm in it.
Sounds like a plan to me! 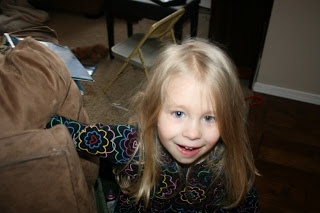 I was so busy watching her dig, I didn’t look down. 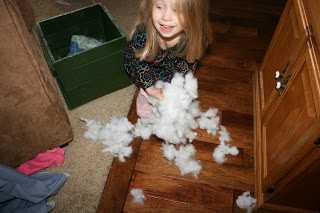 When I looked down, I was a little surprised.
How did she ever think up a stunt like that?
Her conscience must have been nagging,
because she quickly began stuffing the fluffy white stuff back into the couch. 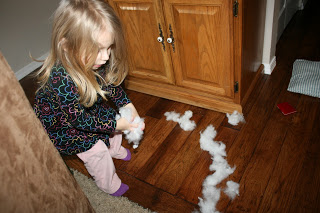 At this point I just had to raise my voice,
just a little.
“Stop, Brookie!
Don’t put it all back!
Gramma needs to go get her camera!” 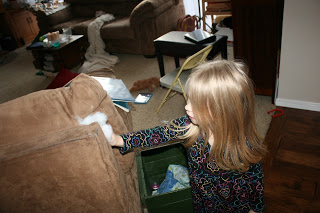 She politely waited, then allowed me to take these pics.
Then, she restuffed my couch and I quietly explained to her
it probably wasn’t a good idea to unstuff Gramma’s couch.
A few days later, Rebekah proudly walked me to the couch.
She had taken a darning needle and thread,
and sewed up the hole for me. 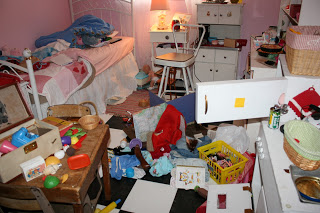 Rebekah fixed the couch,
but we haven’t quite conquered the bedroom yet.
But, that’s OK.
The Mom in me would have stayed up until midnight cleaning.
The Gramma in me knows how to make a path to the bed,
and keep the door to the room shut so I don’t have to see the mess.
The Gramma in me knows we’ll eventually get to it.
The Gramma in me
is the New Improved Me.
The model is slightly older,
slightly run down,
but definitely wiser.