This new year sneaked up on me the way Christmas did.  I just wasn’t ready for it.  I hadn’t planned any special event or snacks to ring in the new decade, I hadn’t even thought about any resolutions except that nagging weight thing we all think about and the need for writing goals for the new year.
At one point during the last day of the year, as we were scampering around the house, cleaning up the mess we created by accidentally locking the cat in the house while we were in CA for Christmas, I began thinking about the new year, and I panicked…just for a moment. The past decade held many sorrows and trials for us, I had a sudden fear for the year ahead.  What if…..What if….What if….
I was worrying. At the same time my thoughts were racing, my husband was coming down the hall, saw my face, embraced me and soothed me with kisses and words of encouragement.  In a minute, those doubts, those weak lack-of-faith thoughts were gone. The whole episode took less than two minutes.
It was a perfect earthly example of the Heavenly Father’s arms.
Deuteronomy 33:27, “The eternal God is your refuge, and underneath are the everlasting arms.” How quickly we need to fly into our Father’s arms and let Him comfort our fears, soothe our souls and show us His everlasting love.
Since I felt that human need to do something for the new year,  Beka and I planned a trip to Build-A-Bear.
My monkey has been a celebration of my family’s support through cancer, and Beka’s has been a way to help her cope.  She was 2 when I was first diagnosed, and has needed her own way of living with cancer.
Our love language is monkeys around here; I have loved them since I was a little girl. 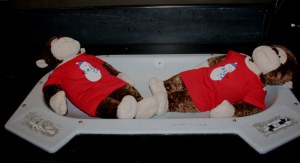 When we stopped in the restroom, we were delighted the mall’s bathroom was so accomodating.  Our babies rested while we washed our hands. The dollar bins at Target are a great source of for seasonal t-shirts for the BAB animals. 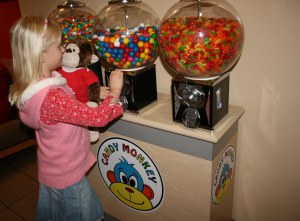 Even the candy machines were following our theme. 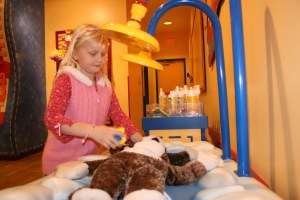 At the mall, most of the women my age are getting their nails done, getting facials, make-overs, buying their $1000 purses and their designer clothing.  I was, and always have been, the only Mom walking through this upscale mall holding her own BAB, 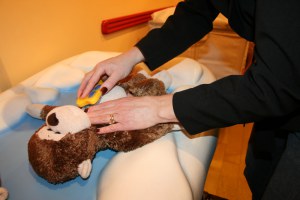 and  the only Mom giving her animal a spa treatment. 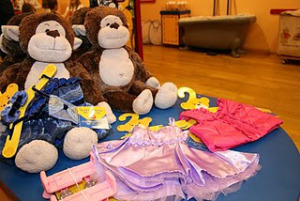 Too many choices!  We were enticed by the inline skates and the casual wear, but Beka’s heart was really with the formal dresses. I realized that often we parents “guide” our children’s choices, so they end up buying what we want them to.  It took a long time for Beka to choose because I repeatedly told her to choose for her, not me. It was an interesting lesson in decision making.
She later discussed this process with her Daddy, and I realized her huge hesitation was that the dress had spaghetti straps, something we choose not to wear as a family for modesty sake.  Her heart is so tender. 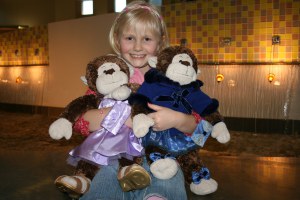 We purchased the  formal gowns, then dressed the monkeys near the fountain.  The store was so crowded, everyone in the vicinity that received a BAB gift card for Christmas was in the store. No wonder it took 15 minutes to go the  three blocks from the interstate to the mall. 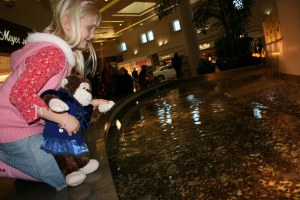 We tossed my four pennies into the fountain, my next purchase I was short one penny and had to use my debit card. 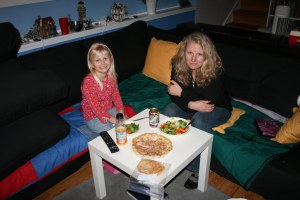 I came home tired, trafficed and shopped out, Beka came home and set to making dinner.  I didn’t ask her to.  She chopped things for a salad, had Daddy help her make a pizza, then we sat on the cushionless couch (they are STILL drying) and watched a movie together.
We are ready to face a new year, with faith, hope, and acceptance for whatever the year brings, and we’ll do it with very well-dressed monkeys.
Share
Pin
Tweet
Email
Print