When it comes to wrapping presents  I have to boast.
I am Queen of Peekless Presents.
I wrap so my kids can’t guess what is inside by shaking, unwrapping, smelling or feeling.
Unfortunately, that’s because when I was a young girl,
I was the Princess of Peeking.
One year, I totally ruined Christmas for myself because I had  peeked into each package. 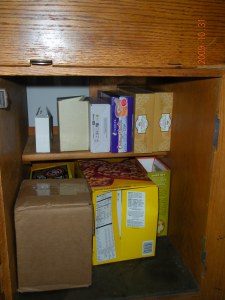 I start saving boxes of all sizes for wrapping presents in the Fall. By mid-December, I had two cupboards in the garage filled with boxes.

Things like CD’s, books and clothing are too easily identified if you wrap them as they are. One little fingernail slice through the paper, and you know exactly what you’re getting.

Then, I implement my best trickster techniques.

If it’s something noisy, like Legos, I actually open the cellophane packages and put the legos in ziploc bags, adding something to muffle the noise.

If it is something quiet, like a sweater, I may add marbles or legos to the box to give more appeal when the kids are shaking the box.

I rub the tape with my fingernails until it is so securely attached to the paper, it cannot peal off without tearing the paper.

If the wrapping paper is see through, I wrap the package first in newspaper.

Some years, I develop a coded and put a number or a symbol on the packages instead of their names.

A few years, I just didn’t put any names on the biggest gifts. This backfired on me last year when I forgot what was in a few of the  packages and who they were for. My hubby and I had to conference in the kitchen to ensure we correctly distributed the gifts. This year I tagged ALL the presents with names.

If it is a very large present, I may hide it in the attic and wrap a note telling where to find the present in a very tiny box. If it is a tiny present, I may wrap it in a big box. I love the suspense, knowing I have really fooled my kids and kept their gifts a surprise.

When I was bragging about this  a few years ago, a child admitted,

“It ruins the surprise of Christmas.”

I asked the other kids if they ever peeked at their presents.

They’ve shook them until the cows come home.They’ve held them up to the light to see through the cheap wrapping paper I buy.
They have squished and poked and prodded and smelled.

But, they never have peeked. Or so they claim.

Jon confessed to opening the package enough to see the back of the box was red.

Bethany admitted she shook a package until she was convinced she was getting a fossil for Christmas. She doesn’t remember what the gift was, just the surprise that it wasn’t a fossil. She did admit to peeking at her siblings’ presents.

But, nobody has peeked at their own presents,
or so they claim.

(I’ve heard from older parents, sometimes it takes decades for the truth to come out.)

Nobody has opened a package and re-wrapped it, like I did.

Nobody opened just one end of the package to see what was inside, like I did.

Nobody has “accidentally” poked a hole in a package to peek through, like I did.

Nobody has peeked in closets, under beds, and in all hiding places to peek at the presents before they were wrapped, like I did.

I am the best wrapper, because I was the worst peeker.

Since kids always love to do the opposite of what their parents do, then it is still useful for me to be the
Queen of Peekless Packages,
because all my grandkids will probably be peekers.

So….were you naughty and or nice?
Did you peek?
Anybody have any Anti-Peek-Techniques that I missed?