When I named my blog  “Momma Mindy’s Moments” it was for two reasons:

1.  I love alliteration
2.  I wanted to capture how the Lord was working in my life, moment by moment.  I wanted to encourage my readers to find Jesus everywhere….

I intended to write mostly about happier moments, but my plans aren’t the Lord’s plans.  He allows suffering in our lives according to His Jeremiah 29:11 plan.  So, I’ve continued to write about all the life events in my moments.

Some moments are easy to blog.  Others are hard.

I’ve been skirting the issue for four days, not knowing how to write about this, so I’ll just blurt it out.

Thursday, May 19, 9:30pm, my older brother, Lee, suffered cardiac arrest.  His heart stopped.  He was talking on the phone to his son, Ezra, and felt, again,  the two-week old discomfort in his chest.  It had reached the point where he and his wife had just agreed he needed to go to a doctor. He told  Ezra, “I’m not feeling well.”  Within seconds he was on the floor, his hand still clutching the phone, and he was still.

His wife, Nita, hung up on Ezra and called 911.  They asked her to check Lee’s breathing.  It was shallow and irregular.  She noticed his skin turning blue.  With the phone tucked into her shoulder so she could hear the instructions, she began CPR.  She continued until the paramedics arrived less than 5 minutes later.

The fire chief called our home while the paramedics were shocking Lee and because we live only a few miles away,  my husband and I beat the ambulance to the hospital.  They allowed us to go back into the emergency area when he arrived.

My big, tough older brother, former Airborne Ranger,  who has scaled mountains and dreamed dreams bigger than mountains, was hooked up to every contraption available.

My first view was only his pale white feet, sticking out from under a hospital sheet.  I was recalling his zeal as a newly saved 19 year old, signing letters with Lee W. “Willing to Die for Christ.”  I’m pretty sure he was still willing to die for the Lord, but in his youthful zeal I know he pictured martyrdom by spear, sword or bullet, not his own heart failing his physical body.

The staff graciously allowed me to touch him and to speak to him, even while they were monitoring.  They worked around me.

Lee was slightly thrashing around and I touched his head and leaned in.  Every verse in the Bible I have memorized for thirty years escaped my mind.  All I can could say over and over was the name of Jesus.

I would whisper, “Jesus, Jesus, Jesus is here.”  It calmed him and he stopped thrashing.  His Excellent Name truly is a refuge and a fortress.  Wives are a good comfort, too.  When Nita was done with the paperwork and came in, he responded to her presence. It was amazing to watch.

The doctor relayed that the catheter lab discovered a 80 – 90% blocked artery and had immediately placed a stent in.  The staff repeatedly praised Nita for her CPR skills, doctors and nurses calling her a hero for saving her husband’s life.

With tears in her eyes and a shake to her voice, she admitted she felt uncomfortable being hailed as a hero for something like that.  The praise constantly reminded her of what she had been forced to do.

He was in Critical care for a few days, and arrived home Sunday evening, three days after his ordeal.

Scott and I visited them at their home that evening, and the return to normal was surreal.  Lee was back at his desk using the computer in the living room, Nita was knitting on the couch, peace pervading the room.

Recovery will take time, but we’re so thankful to be planning recovery and not a funeral. 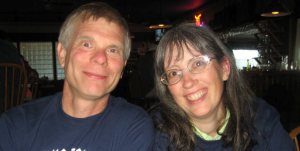 As I look back over the weekend, I don’t feel  panic or depression, I can only praise and thank the Lord.
Nita saved my brother’s life.

I can’t get over the wonder miracle of it all.