The world’s most famous teenager wasn’t know for her figure, musical ability, physical capabilities, flawless complexion, or her ability to perform. She never set foot on a stage, spoke into a microphone or was recorded.

There are always teen idols, but they are soon forgotten by the next generation, because what they lived for, wasn’t worth dying for. Their contributions weren’t valuable enough to merit an audience in future generations.

Watch for these names of the most famous teen celebrities 50 years from now.  Your grandkids  most likely will not know them. They’ll have died of drug overdoses, suicide, or just dwindled into obscurity.  Very few teen celebrities grow into usefulness and productivity.

The world’s most famous teen was known only for keeping a journal for two years. 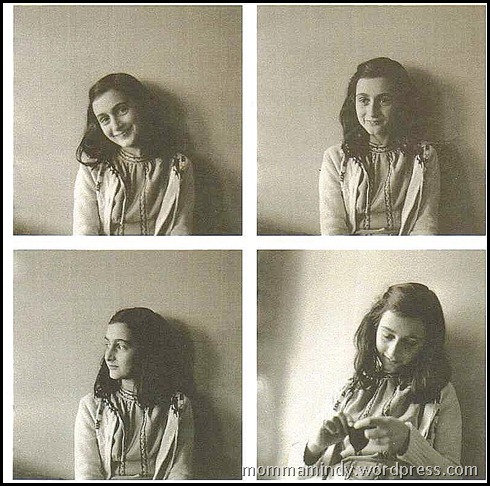 Then, Anne Frank was murdered.

Anne’s work is significant because it ensures new generations of young people will not be allowed to forget or deny the Holocaust. Many still deny it occurred, but as long as there is proof,  their puny voices are futile.

Her diary is usually one of the first exposures children have with the Holocaust, I know it was mine. For some reason, my history teachers never talked about WWII. I studied ancient times, state history, and with an occasional unit on the Eskimos or Sparta. Nobody seemed excited about what they were teaching, two of my history teachers merely read their outlines, lectured while leaning on a podium and droned on and on. They were bored, so I was bored. History came alive to me when I began homeschooling. My world enlarged, and so did my heart. There’s a difference between adding intellectual knowledge and feeling the exercise of suffering as you relive history.

My first major experience in learning about the Holocaust was when we toured Yad Vashem in Jerusalem. I was in my early 20’s and still very ignorant. I walked through the museum weeping so hard I could barely focus on the exhibits. Parts I had to skip, the reality was so severe.  I found the oldest person in our tour and said, “Who was president at the time? Why didn’t we do anything?” I remember hearing a brief explanation of the politics of the time and the same sentiment, “America didn’t want to get involved in another war.” You don’t go to war because you love to fight, you go to war because you hate the evil.

The line in front of her house is always long, always somber. There are about a million visitors a year to her home. People walk the streets she walked.  They hear the church bells she heard. We all try to imagine what her world had been like, but are at a loss. 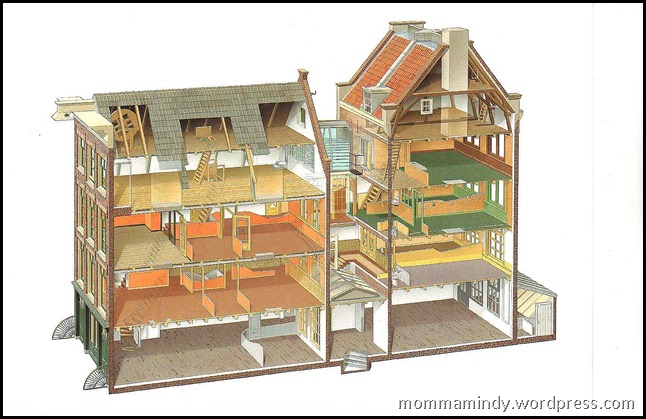 Once in, the line must move  quickly as there are always more waiting.  There is hardly any time to linger, to meditate.  Not pictures are allowed, there are no places to sit, to look, to write. We began in the large part of the building that was her father’s  business. We saw crates that stored the goods, office desks, and advertising posters. (Virtual Tour) 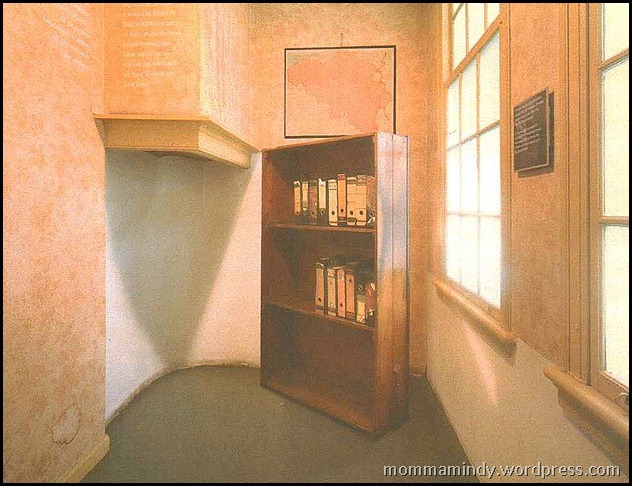 You simply walk through the offices, through the storage area, and past the bookshelf that hid the entrance into their secret home.  You tread upstairs silently, storing up images and feelings to sift through later. 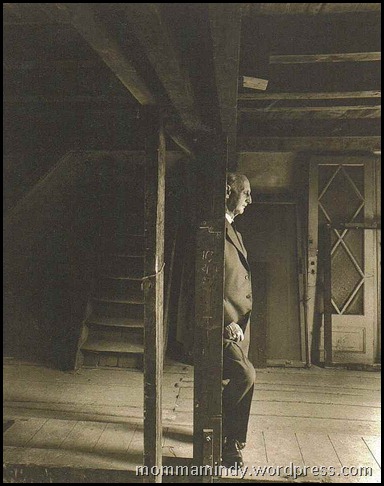 The rooms are devoid of belongings, because everything was stolen and shipped to Germany.  Otto Frank decided to leave the rooms empty to emphasize the fact that his family did not return from the death camps.

As I shuffled through the room in a slow, somber parade,   I was distraught photography wasn’t allowed.  I dug through my purse for my small journal and a pen, trying not to hold up the line, very aware that so many people wanted to get in before closing, the entrance line still snaked down the block.  The pen had no ink.  I shuffled forward a little more while digging through my purse trying to find a pen.  I HAD to capture this experience. I found a working pen, relieved I could scribble anything to record my exercise of soul.

I was in Anne Frank’s Secret Annex. 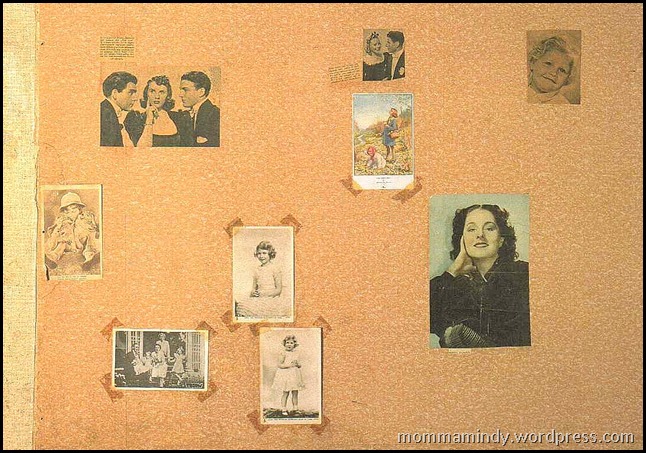 A little girl and her puppy

Little boy on a chamber pot

Sonja was a name I didn’t recognize, so I did a little research.  I was surprised to discover she had Nazi affiliation. It could have been for survival or out of sympathy, we may never know the whole truth.  Anne would have had no way of finding that out at the time, but it still grieved me.  Ironically, the woman Anne admired enough to put her picture on the wall is not as well known today as Anne is.

When we got to the kitchen/ dining room, I had a little more room to wander around and see the stove and sink, and touch the same yellowed wallpaper they stared at day after day after day.

Then it hit me.

I wasn’t just touring a historical home, I was touring a home of a family that had only one member survive the Nazi holocaust. The mothers who stood by the sink washing dishes, the teenagers who went through puberty in a small, cramped annex, the parents who feared for the futures of their children, the older people who had lived through the previous war. They all died. They died for no reason other than they were Jews.

I shuffled into the corner where the black stove was and wept quietly.

Nobody talked. Whispers were rare. Anne Frank’s house is an on-going funeral, as we grieve the sickening truth of WWII. 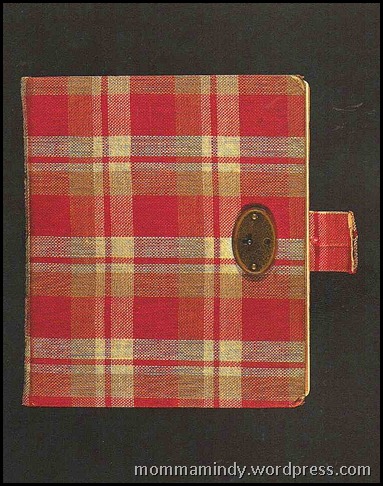 For her 13th birthday she received this red plaid diary and in the beginning wrote about school, girlfriends and boys, and it soon became her release.    “I write down thoughts or feelings, otherwise I’d suffocate.”

Anne wanted to be a writer and wrote fairy tales, short stories  and  had started a novel called “The Secret Annex.”  To her diary she stated, “In my head it’s as good as finished.”

Gerritt Bolkenstein, Dutch Cabinet Minister  exiled in London, made a plea on the radio on March 28, 1944,  for the Dutch people to keep diaries and other documents as a record of their experiences during the war.  It gave Anne an outlet for her voice, a renewed sense of purpose. They were encouraged to write of their experiences so someday their voices would be heard. Anne began recopying her diary in light of publication, starting in May 1944.  In August 1944, when they were arrested, she had rewritten up to March 29, 1944 on 215 sheets of colored foolscap.

A picture of Anne writing at her desk has the caption from her 11 April 1944 journal entry.  “I’ll make my voice heard, I’ll go out into the world and work for mankind!” 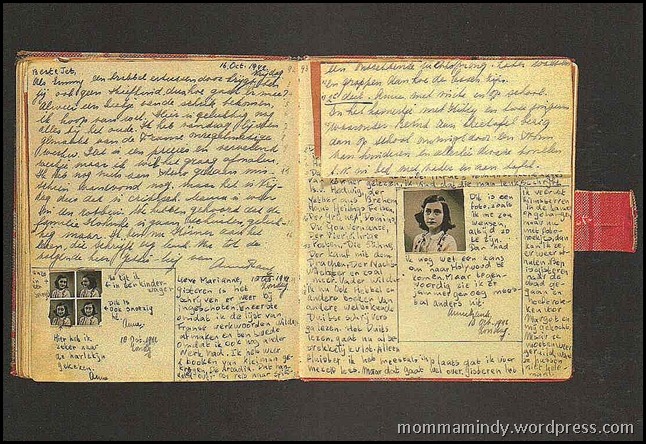 Diaries  don’t sell today.  In a meeting with an editor from a major Christian publisher at a writing conference, he flatly stated they wouldn’t be buying memoirs. He wasn’t rude, he wasn’t trying to discourage writers, he was stating a fact.  They don’t sell. But Anne’s diary still sells thousands each year.

Anne’s voice is an echo of millions of lives cut short by violence, by an evil so great and a hatred so strong, that the world still shudders at what happened, and wonders why they didn’t notice it sooner.

At the end of the tour my heart was renewed with those feelings of righteous indignation “How could that have happened?  How come this evil man was not stopped sooner?  Why didn’t people do more?”  It made me proud to be American, proud that our country finally sent soldiers to the shores of Normandy and gave their lives so this evil could be stopped.  Blood for blood is an awful truth.  To stop the bloodshed, we had to be willing for our men and women to die.

While my heart grieved and raged I reached the last room of the Anne Frank House, a modern movie screen with benches.  With a mission of promoting tolerance, short video presentations were going with situational ethics and the battles they were raging.

One issue they presented was the question if a hip-hop band from France be censored?  Should freedom of speech still be allowed if they are bashing gays and were outright pronouncing themselves to be homophobic?  Should they be stopped then?

An Indian woman raised in America wanted to join the US Army at age 18, but is worried she won’t be able to wear her religious head scarf.  They consented that the US allowed one soldier to wear a turban, but didn’t know how far we would go with our tolerance.

As I listened to these situations drone on, I was distressed. These topics are worthy of discussion, but in the light of current issues, they aren’t priority.

Why weren’t they mentioning the fact that Muslim terrorists were killing daily?  Israel is STILL being bombed frequently by the Hamas.  Jews are still being persecuted and so are Christians.  There are still Annes in this word, people hiding out for the sake of their faith while their parents are being jailed, beaten and killed.

I was relieved to learn that the Anne Frank House is partnering with Yad Vashem for Holocaust education.

Remember the teenager’s passionate writing, “I’ll make my voice heard, I’ll go out into the world and work for mankind!” ?

Anne wasn’t able to go into the world, but her voice is heard and it’s working for mankind. I just hope she’s always allowed to speak loud enough.