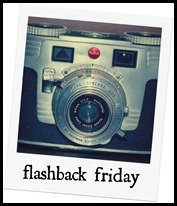 I was a columnist for the local paper in high school.

It was a county paper.

It was a weekly, county paper.

It was a weekly, county paper with a small circulation.

It was a weekly, county paper for a county so far up in the northeast corner of North Dakota, people thought we lived in Canada.  Some of my friends could spit on Canada from their property.

But, I loved people, writing, and driving all around the county, so it was a great job for me.  I marveled when I was handed a paycheck, because I would have worked for free.  But, since it kept me in Mountain Dew and jeans, I always cashed it.

After writing a few articles, my editor asked me to write a column. A weekly column.  I hardly knew what one was, let alone what to write about.  He mumbled “just write something” and walked away.  He came back with a camera, hollered, “Hey, Melly!” and snapped a picture  with my mouth open as I was hovering wordless over my IBM Selectric.  A few minutes later, with still nothing brilliant on my page, he returned and asked for the name of my column.

Name? It needs a name?  Name. Parents had nine months to pick out a name for their babies, I had less than nine minutes.  If I couldn’t come up with an answer quickly,   he would return with his wooden ruler and make my desk his drum and the entire office his stage.

I truly think he believed his ruler could tap the pace for my brain waves, that the faster he tapped, the faster I typed.  It wasn’t his ruler, it was my youth.  Remember those days when brilliant thoughts poured from your….um brain… and…um…onto ….um….um….what was I saying?

Yea, the name.  Eleven  years of teachers answering all my questions with “Look it up!” I did what any smart student would do, I grabbed the dictionary off my desk. I opened to the “M” section to make an alliteration and mumbled through the words until I got to the “Ma” section. I didn’t love the title or the picture, but I had a column to write and couldn’t fuss over the particulars.

I had no idea the amount of taunting in the high school hallways I would endure from those split-second decisions, but telling myself to ignore torment dished out by classmates that couldn’t read my column kept inner turmoil to a minimum. Coping strategy was crucial for high school, wasn’t it?

I also had no idea the picture of me in braces  and “I really wore that to work?” would haunt me for decades. 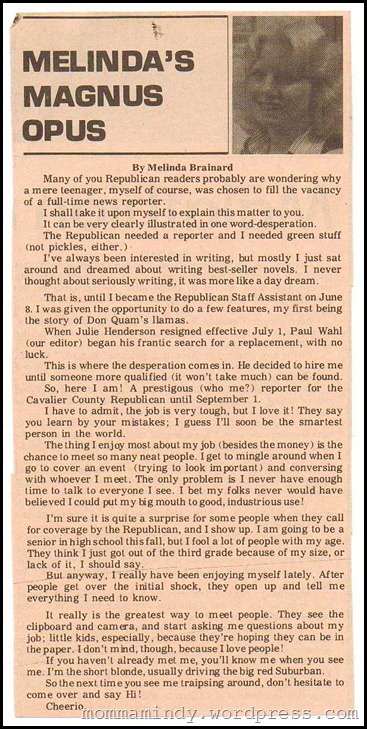 A cold Mountain Dew later, I had my first column.  It went straight to the typesetter without any corrections or editing, which I now recall with the clichéd chagrin.  It’s always awkward reading early writings, especially early teenage writing, but I’m struck with the irony.

I was young and ignorant, and had much to learn on the fly.

The Magnum Opus wasn’t the writing I produced, it was what writing for the newspaper produced in me.

Previous Post: « Put the Grammar Girl in Your Writing Toolbox
Next Post: The Ol’ Bag Lady Has Dinner in the Bag »