A “brawling woman” sounds like someone who had a few too many barley pops at the local tavern and is giving out knuckle sandwiches.

The Lord isn’t describing a Christian wife, is He? If “brawling” doesn’t indicate a bar fight, let’s look into the meaning.  “Contentious” is the word chosen in New KJV translation. NIV  translated it “quarrelsome.” 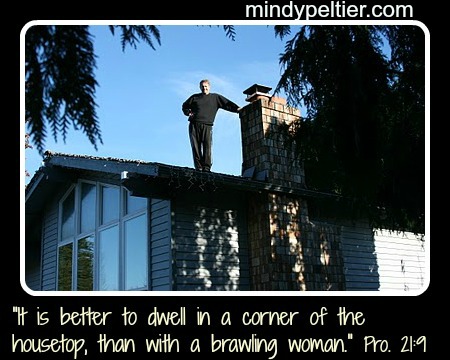 In the Bible Knowledge Commentary, it says a man would prefer living on a corner of a housetop “where one can at least have peace and quiet rather than in a spacious home with an argumentative, contentious wife.   A wife who causes strife makes a home unpleasant and undesirable.”

Putting yourself in the picture yet?  I am.

I guess the “corner of the house” has been replaced with current sayings like “being in the doghouse,” “sleeping on the couch,” “being in hot water,” but a wife’s reputation to be cranky remains the same. 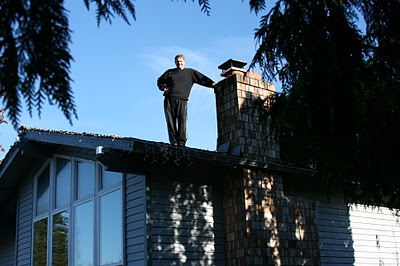 Yea, that’s my husband, Mr. P, on the corner of the house.

And a contentious woman are alike.”

than with a contentious and angry woman.”

1 Peter 3:1-2
“Wives, likewise, be submissive to your own husbands,
that even if some do not obey the word, they,
without a word,
may be won by the conduct of their wives,
when they observe your chaste conduct accompanied by fear.

Did you read that middle line? Without a word.

Men don’t like to be nagged. You don’t win when you nag. Oh, and it’s coupled with submission.

Does that mean you never have a say? No. Our husbands married us because they admire our faith and our brains.

They want those faith and brains in action.

Does that mean you’ll always win? No. Do you want to, anyway?  Didn’t you marry him because of his faith and brains?

We can’t have the dripping faucet kinda’ action. Or the kind of action that sends him to the 21st century variation of the “corner of the house.”

The action where you wisely state your opinion, allow him to state his opinion, then pray, especially if your opinions differ, until you have an agreed upon course of action.

We “win” when we walk in the Lord’s will as a couple.

We need to keep our husbands off the roofs. It’s safer inside, anyway.

Want to read more about husbands?

Dad! That’s Not the Way You Do That!

What if Daddy is Wrong?