January is a good month for planning Christmas.  Afterall, I have nearly 12 months!  Since I am always less rushed in January than in December, it is a good time to invest in the new year’s holiday season. 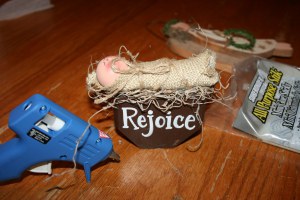 It also is a good time to deal with things I didn’t do last year.  This precious thing was in a craft area, waiting to be glued, for over a year.  He wasn’t displayed this year, but  is ready for next year! Why did I put off something that took less than five minutes to do?
As I am putting away decorations I am either fixing, or putting them in a small pile to make sure I fix before December. I also sorted a lot of things into clear bags, so that like ornaments and decorations were together. 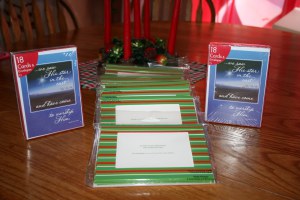 I bought Christmas cards for pictures on clearance at Joann’s for $.50.  The boxed cards were 50% at Target.   I am really redeeming myself, because I didn’t even get cards out this year. I was so excited, I almost put on address labels. Maybe I’ll just start nagging the family now about getting together for that traditional family photo shoot they all hate. 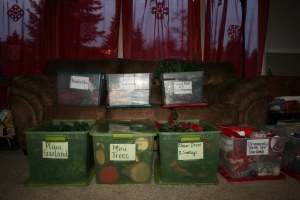 I bought new containers at Target this year, for $5 each.  The lids have snap-on handles for the lid, so the lids won’t pop off like the older containers do.  I labeled the boxes, and as I put things away, I put them in the right containers.  Now, they are stacked in the hallway, annoying us all until they can be put in the attic.

I also leave one of the old broken ones near the trapdoor in the attic for things “too late to classify.”  It always seems that I forget a few things and I don’t always want to go up and shuffle all the boxes to put each item in the right spot.  I am a type A that has learned to also be a type B.  I can’t do it all and I can’t do it perfectly.  I’ve learned to live with pretty good. I was a little annoyed that my new containers didn’t match my old ones but I kept reminding myself, “they’re going in the attic, it really doesn’t matter.” Anybody else that obsessive? 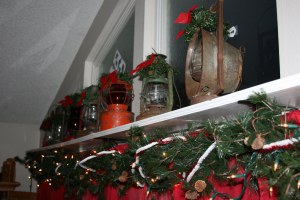 I am leaving up the greenery, lights and garland on the top of the picture window in the living room and above  the sliding glass door in the dining room.  We added white crotcheted snowflakes for January, will change to hearts for February and leave it up until March, when we celebrate our 24th anniversary.  Then, I will be totally ready to get it all down.  Last year it was April by the time we got around to this.

I haven’t taken the tree down yet, because I have vowed to not take it down until I get a nice picture of each kid in front of the tree.