As Christmas cards come in during the holiday rush,  I open them, enjoy the picture, read them briefly and then toss them into these two cans.  If I am  feeling organized, I cut the address label from the envelope, tape it on the back of the picture, and recycle the envelope.  If I am feeling like all the stars  in the universe are lined up right, I might even fold and tape the letter on back of the picture because the kids always get all the cards and letters mixed up when they read them. 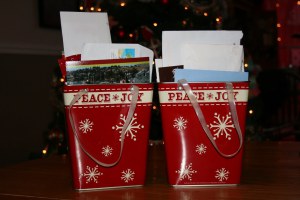 When I feel like it,
when I want to,
when I have time,
I deal with the Christmas cards.
Sometimes, I don’t get this done until February.  Once during my initial dealings with cancer, I put the cards in a  Ziploc bag, went through treatment, moved and didn’t find them again for three years.  No wonder I didn’t know some of my friends moved, had babies and become grandparents. But, when I get around to it, my plan is simple.
1.  Read all cards and letters at leisure.
2. Make a list of who I received cards from in OneNote.

3. Update addresses in Outlook. In the notes area I also add babies that were born, illnesses, other things that I want to remember from the letters.

4. Keep pictures and make sure they were dated. (In 2014 I started scanning them for a virtual scrapbook!)

5. Cut off parts of the cards I want to use to make gift bags.

6. Recycle all paper, except addresses. They’re burned in the fireplace, because we haven’t purchased a shredder that lasts longer than a week.

If I was one of those moms, I guess I would also put all the paper into my blender with water and whatever else and make my own paper out of it to use for cards the next year.  But for now, I am one of these moms that is just trying to make it through with a few accomplishments in life other than waking up each morning, keeping up on laundry and occasionally making a really good meal. 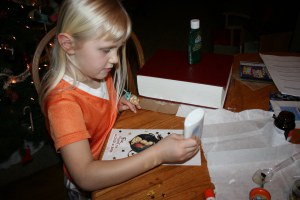 Beka was a great help gluing.  We use rubber cement, making sure it covers the entire cut-out, especially the edges. We used school glue for the gold stars that added a nice touch on a few cards. 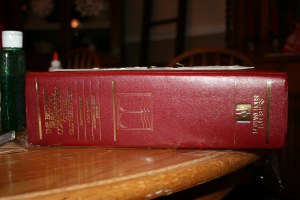 We lay them under plastic wrap and then under a big book.  We want them to dry flat  without puckers and not have the edges peel up.  I learned the hard way to not stack them before they are totally or they will all glue together. 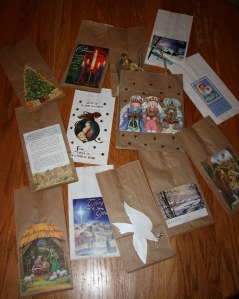 Laying out to dry is also a crucial step I added when I stacked them too soon one year and they, duh, stuck together.
For some who are really crafty, I know the wheels are spinning on ways to embellish with scrapbooking paper, backgrounds, letters, sequins, bows, etc.  Maybe some year.  At this stage of my life, I am getting them done, but I would still love to hear your ideas!
When I wrap with them, I fold the top over, use a hole punch, and tie them shut with raffia or curling ribbon.
One year, I was able to buy the white produce bags from the grocery store and made nice bags that worked well with colored tissue paper.
Because all the other decorations are usually put away when I deal with the cards, the containers go in the container in the attic I refer to as “too late to classify.”  I used to work for a newspaper, can you tell?  I don’t want to unstack the boxes and put each item exactly where it goes.
I’ve been doing this for years.  I guess I was green when green wasn’t cool and it wasn’t green, it was called “poor” or “thrifty.”
Share
Pin
Tweet
Email
Print