Scott and I left Seattle around 1pm so I could attend a writers conference sponsored by Oregon Christian Writers in Portland. We left early to avoid traffic. Instead, we found ourselves in the middle of it. Pouring rain, bad visibility, and the Friday “I wanna go home early” syndrome made us wonder if we were going to make it across the border by nightfall.

The traffic was slower than normal. We talked, listened to Christian music, talked some more, and tried to not get stressed. You have to learn to live with traffic if you live in a metropolis, you can’t live without it. The rains poured for awhile, then slowed.

We saw a two car fender-bender. Then, we saw a small four-door car that had just been launched up the graded ditch, fortunately landing on all shrubbery. Four teens were wandering around the car in a daze. I was praising the Lord they were able to wander around while waiting for the police.

Then, as we sped along at 5mph, the guy in the lane next motioned with his hand to roll down my window, then gave us some bad news. 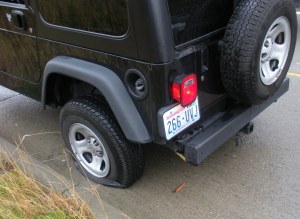 I didn’t believe him until I saw it. We hadn’t felt anything. We hadn’t heard anything. But, I had just been marveling that there was so much shrapnel on the interstate from some bad accidents. Honestly, I had been thinking that since traffic was so slow, I could probably jump out and pick some of it up off the road. I didn’t have to get out of the car. We picked it up in our tire. 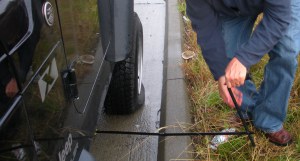 My husband jumped out and began using that wimpy jack to raise the Jeep. Because we had been driving in the carpool lane, we were already on the far left side of the highway. Unfortunately for everyone else, we shut down another lane of traffic and slowed down the commute even more.

We found ourselves joking and enjoying the fresh air while we changed the flat. I was thinking how we have learned over the years to trust and praise the Lord in all these things – even a flat tire. We didn’t need to know why, but we knew He had allowed this. 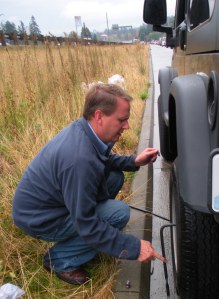 My hero.I stood in my new jeans, new tweed jacket, and high heels and giggled. My Dad tried to teach me how to change a flat when I was in high school. I told him I didn’t need to know how because I knew how to cry.

Too bad the ultra-feminist movement changed that for us. I don’t want to change my own tire even if I know how. I want to cry an let a man change it for me. Especially if I am wearing new clothes, which happens less often than a flat tire.

I didn’t even have to cry. Scott did the hard work in less than ten minutes. It was perfect timing. We got back into the Jeep, he looked in the rear view mirror and squealed into the lane to the right of us, barely fitting in… 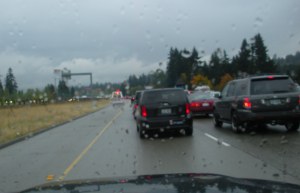 …before the speeding ambulance tore down the carpool lane. My camera is too slow to catch the drama – it was a very close call. And, he really did squeal the tires. 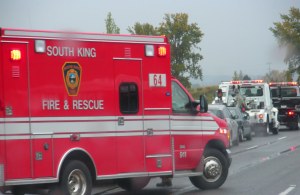 Miles and many minutes later, we discovered the reason for the bumper-to-bumper traffic. 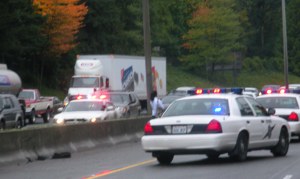 A northbound lane was also shut down with an accident.

We were saddened by the accidents, but so thankful that lives were spared. It was just another day in the normal day in the lives of those that live and commute in the big city.

Although we may never learn why the Lord allowed a flat tire, we had much to be thankful for.

-it wasn’t raining at the time

-we had the tools we needed

-we weren’t in fast traffic

-we didn’t cause harm to anyone else.

It reminded me of a story I heard at prayer meeting from Tim. He had been driving to another town for a job when he blew a tire on the interstate. A little frustrated because of the time constraint, he began fixing the tire. Then, he noticed that he had forgotten to tie down his huge ladder to the top of his van.

If the ladder had slid off, it could have caused a serious accident and/or possibly killed someone.

The Lord allowed the flat tire to spare a worse trauma.

We don’t know the reason for our flat, but because we trust the Lord, we don’t need to know. We drive by faith, not by sight.