for about six hours.

I worked diligently, almost obsessively,  all weekend to bring order to my kitchen and dining room.  I stayed up late, since hubby was out of town,  to finish and start the week with a fresh new look. I wanted everything to have a place and everything be in its place for my new week.

My whole week was certainly going to be improved with the fresh, new look.

My attitude would certainly be much improved as I was surrounded by beauty and order.

My husband would return to the transformed house and praise me endlessly.

My first phone call was a recorded message at 6am informing me my husband’s flight home had been cancelled.  My 7am call was my hubby.  My 8am phone call was Servicemaster, they were coming to fix the water damage. Remember, I was up almost till 2am.

You might remember our wondrous welcome home after a week vacation in California. Our kitty was accidentally left inside for a week and our dishwasher leaked.  All the way to the bedroom below. Yea, double OOPS.

I got a fresh new look in my kitchen,  alright.
They set up their equipment and my vision of my orderly home was clouded by the obnoxious noise of fans and motors. 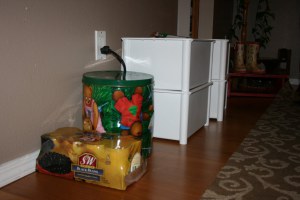 Everything has a NEW place.
My husband was on an  ice-fishing trip with son, Boy Wonder. They planned to  fly  home early on Monday to  arrive before rush hour traffic and spend a nice quiet evening with family. He wanted to return to work on Tuesday rested.

He didn’t count on a major storm blowing through the midwest and cancelling their flight and their rescheduled flight.  The guys caught the last flight home, arriving after midnight to a very disorderly house.

Sometimes we get Bible verses confused with wishing stars.  We put human understanding and reasoning where faith, trust and the Lord’s will should prevail.

Proverbs 16:3, “Commit to the LORD whatever you do, and your plans will succeed.”

We can be fooled into thinking that if we make plans, good plans with good motives, pray about it, it will happen just that way.  Sometimes it does.  Most of the time it doesn’t.  Did we do anything wrong?

Verse 9, “In his heart a man plans his course, but the LORD determines his steps.”

It doesn’t mean we get our way.  It means, plans succeed because the Lord’s will is done.

A plan that includes temporary inconveniences and changed human plans.

A plan that includes
conforming a saint to the image of Christ,
burning away dross,
building endurance,
perfecting faith
and causing them to draw nearer
to His Precious bleeding side.

We sing the songs,
we pray the prayers,
we sometimes just fail to see
how His plans are succeeding in our life.

On Monday, our plans succeeded, because our day went according to His plans for our lives.  I don’t have to know WHY my dishwasher leaked or why the flights were cancelled.

In some ways, the day went smoother than most Mondays. We got school done early.  The laundry was done.  Some shopping was done.  The lack of physical order in our home didn’t affect us, just inconvenienced us.  We worked around it, thankful the damage was being repaired.  We were thankful the guys were safe, even though they would be in an airport for several extra hours.

On Monday, I planned my course, but the Lord determined my steps.

My whole week is certainly going to be improved with the fresh, new look path.

My attitude would certainly be much improved as I was surrounded by beauty and  the God of order.
My kids’ attitudes would surely be improved as they worked in serene, picturesque magazine-worthy God-honoring setting. Doesn’t outward tranquility produce inward tranquility?

My husband would return to the transformed house  woman and praise me the Lord endlessly.

Because, I understand, as much as I LOVE organization,
it isn’t really the physical order in my home that gives me peace,
it’s abiding faithful
on the path
the God of all peace
has ordered for my life.

Has the Lord ever changed your plans for His?