Clothed In Christ
Part Three in a Series
*****

My Dad was a teacher, so I grew up understanding that  people who teach other people’s kids, can’t afford to dress their kids as nicely as the kids they are teaching.

But, I married a teacher, anyway.

When my husband taught in a Christian school, and we made as much in a month as many people made in a week, new clothes weren’t an option. Most of the time, used clothes weren’t even an option. I knew that people who teach other people’s kids, can’t afford to dress their wife as nicely as the kids they are teaching.

However, this poverty put me on the trend-setting edge of fashion.

A few years back, I decided to upgrade my look into the stylish trend of darker jeans with NO holes. I was surprised that not only were holey jeans still the teens’ rage, almost all the jeans already had holes in them. I had to shop and shop to find a whole pair of jeans.

My next shopping trip, I gave in a bought a pair of jeans with pre-packaged holes, hoping to  take one item off my “to-do” list. Who has time to wear holes in their jeans, anyway? 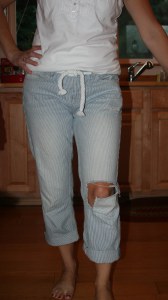 Women who easily wear holes in their jeans shouldn’t buy jeans with holes already in the knees.

The trendy hole quickly became a cavern and I went from being cool, to being in need of new jeans in just a few wearings. 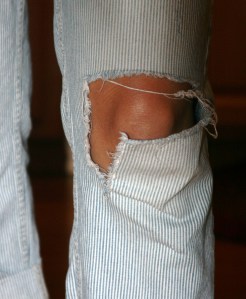 Maybe I should hire myself out to wear holes in the jeans for the companies. Then, I could have an endless supply of NICE jeans and could regularily trade them in after I created holes.

I tried patching my jeans.

The patch peeled off.

I patched the ends of the horizontal tear. 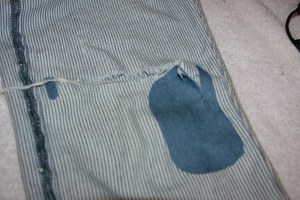 The patch made the hole bigger, but now I had a piece of stiff, scratchy patch attached.

Then, the Lord told me what I did wrong.

If you hear someone say the Bible isn’t relevant to all issues in life,
you know for sure they haven’t read the Bible.

I got some serious mending advice.

Matthew 9:16
No one puts a piece of unshrunk cloth
on an old garment;
for the patch pulls away from the garment,
and the tear is made worse.

I also got a beautiful spiritual lesson as my knee popped in and out of the jeans, and I heard the fabric rip just a little bit more each time I hunched down to take a picture.

The Bible tells me I need to patch my jeans with an old piece of denim. Because the jeans were pre-washed, pre-shrunk and pre-worn, I should have used the same type of material for patching, instead of the new, stiff patch.

The true picture here is not just mending. The Lord is explaining that Law and Grace do NOT mix. Trying to keep the commandments of the Old Testament with the Salvation by Grace message of the New Testament, is like patching old pants with a new patch. It doesn’t work. It tears, it doesn’t fix the problem, it makes it bigger.

We cannot add a burden to Christians to keep a law that was never able to be kept. The law has only been to convict people of their sin and point them to Christ.

In the day of the disciples, some were asking the new believers to be circumcised, a demand of the Old Testament. Paul had to oppose them boldly to their face and reteach them salvation by faith alone.

Today, we still have that problem.

We like to add little rules to the Gospel, little demands on believers that we think they might make them more holy.

The Lord demands two acts.  Get saved by faith.  Get baptized to publically proclaim your salvation, not to earn it.

By adding to the Gospel, we are patching incorrectly.

Keep your mending rules straight, unless you want to be holey.

Keep your doctrine straight, so you can be holy.

Or, you can ignore your mending and focus on your doctrine,  and be holy in holey jeans.

*****
Read Part One – Off With the Old, In With the New
Part Two – Puffed Sleeves of Parenting
Share
Pin
Tweet
Email
Print