I only was in the hospital for about 30 hours after my second surgery to remove thyroid cancer tumors. I was trying to keep the door from hiting me on the way out, so I wasn’t able to garner as many cool souvenirs as I had hoped.

But, I am thrilled to report I did get that lovely bottle of lotion I was eagerly anticipating, the cool name bracelet, earplugs, my own toothpaste (did you know they make it in clear gel?) and

TWO, not ONE, pairs of those hospital socks.

My most prized gift was the bottle of Carra Free unscented Odor Eliminator that Neutralizes Biological and All Airborne Odors. In other words, they were trying to cover up the smell of my projectile you-know-what. What timing, to puke just as the family was standing at the door. Beka was liberally spraying the room while pinching her delicate nose shut. I could see the flaring nostrils of everyone else in the room, while they smiled through clenched teeth.

Dear John, my evening shift nurse, graciously cleaned up mounds of bedding, clothing, and rubber pillows, the bed frame, the floor and I think even the walls. Not sure. I was too embarrassed to look. He was so gracious and kind and didn’t even plug his nose. 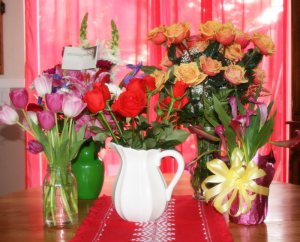 Flowers are always a big benefit of being sick. 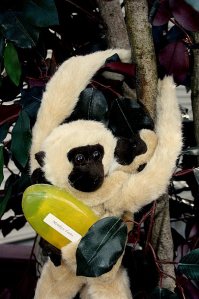 My sister-in-law Nita and niece Lydia sent me this adorable Momma Monkey and Baby Monkey and a homemade bar of soap named “Monkey Farts.”
Guess what it smells like? No, not that, coconuts and bananas, what else? 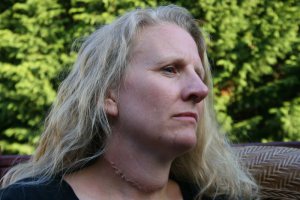 The right side of my incision goes a little farther and has a little hole at the end where the drainage tube was. EEWWWW. I don’t like icky stuff. I had to wait five days to take the picture after it healed somewhat ‘cuz it grossed me out.

The left side looks like a Charlie Brown zig–zag smile. They say when they make a scar, they make it a little crooked so it eventually blends in with the neck wrinkles.

How wrinkled do they think I plan on getting?

Aw, look at me, with my built-in choker.

After Beka got used to the scar, she had news for me.

“You know what it looks like Mom? Let me show you!”

She dug around in the scissors drawer until she came back with this pair of scissors and held them up triumphantly. Later on, she asked me if the doctor used scissors to open up my neck.

I know what SHE is thinking!
I am getting used to the scar. To turning my whole body to turn my head. And the fact that I am, once again, slower and weaker. What has been hard to deal with is the trauma to the nerves. I didn’t have nerve damage with my first surgery, stayed in the hospital longer, and was on stronger meds longer.
My the pain begins in my right ear, extends down the right side of my face, my right shoulder, and radiates down with a burning, numb feeling. My ear feels like it was burned to a crisp during a too-long-of a day at the beach. It hurts to the touch. I am praying for healing, and I ask for your prayers. The pain ranges only from a 3-4 on a scale of 1-10, but it is a constant sensation.

It reminds me of a conversation I had in the middle of the night with my angel nurse, Janae. The Lord provided one of His sweetest saints to minister to me hour by hour the night I was in the hospital. I wonder if she really was a nurse, or if she was a real angel. As we were joking about my long, ugly scar, and she encouraged me to wear it proudly because I was alive.

I told her that I didn’t have the same kind of trials that the Apostle Paul had, mine aren’t as great, but I have adopted his attitude. “I bear on my body the marks of Jesus Christ.” (Galatians 6:17). I told her I considered my scar to be one for the Lord Jesus Christ, because He allowed the cancer and I wanted to bring Him glory through the cancer.

She smiled and reminded me of something else of Paul’s life, that he asked three times for the Lord to remove the thorn and the Lord said no. (2 Corinthians 12:7) As we continued to talk about the Lord we both loved, I knew the Lord was speaking to me through this angel nurse. I was so thankful for this blessed fellowship in the middle of the night, in the middle of a dark hospital room, where I was surrounded with sounds of sickness and unhappiness and had mistakenly thought, for a few moments, that I was all alone.

Through each stage of this cancer journey I have had to lift up my expectations to the Lord and let Him work as He sees fit. I thought after suffering so nicely for Him the first time, I would be done. I thought that I suffered so nicely the second time that He would heal me. I guess I forgot to ask for no pain. I guess I thought I could suffer only under my terms. I have to repeatedly offer each part of my heart, body and mind to the Lord and let Him truly work as He sees fit.

If He asked me if I was willing to trade the cancer for a little pain, wouldn’t I have said YES? But, He doesn’t ask, because I had already told Him I want to walk by faith, I want to be His, I want to bring Him glory, I want to win souls, I want to be like Him. Why did I offer these valiant prayers with formulas attached?

Yes, pray for my healing. The pain isn’t horrible, but the constancy of it can be draining. I find it hard to not think about how I feel all the time. Instead of now trying to rejoice even though I have the emotional trial of carrying around cancer in my body, now I have the physical trial of the pain it cost to remove the cancer.

But, there is always somebody worse off than ourselves, isn’t there? I haven’t had chemo, I haven’t had radiation,; to some dear cancer sufferers I am barely in the throes of suffering. You may think what you are going through is nothing because you don’t have cancer. We must never measure our trials against someone else’s, only against the purpose the Lord has to refine us.

I Peter 1:6, “We greatly rejoice, though now for a season, if need be, you are in heaviness through many trials.” For every trial there is a need a “need be” tailored to fit you.

I remember in the middle of one sleepless night, where I was communing with the Lord, and asking Him why He allowed the cancer to continue  indefinitely. I went through almost three years of testing with lumps and stuff in my blood, but they were never able to give me a conclusive diagnosis that I did or did not have cancer. The still small voice that broke through the darkness to answer my wondering heart, “That patience may have its perfect work.”

So, dear friend, whatever you are going through, let the voice of the Lord speak to you, that “Patience may have its perfect work.”
Share
Pin
Tweet
Email
Print

Previous Post: « Momma Mindy and Monkey at the Hospital
Next Post: On the Lighter Side of the Scar »