A few weeks ago my son Jon was a little more excited about the upcoming surgery than I actually was.

He enthusiastically commented, “Yea, cool, mom, so are you nervous? Like they are going to go in there and slash you open and look for the cancer.”
I bit my tongue, for about five seconds, then calmly informed Jon that I was his mom and I loved him and I didn’t take offense, but warned him against speaking that way to any other cancer/surgery patients. Not sure if he got it.
My husband, Scott, was a little more dramatic when I first removed the cool white foam neck brace thing and dared look at the scar.
“Wow, you look like you got ripped open with a chain-saw!”
He did have a clever come-back later, when we discussed the probability of future surgeries. “Hey, they should have just put in a zipper, so instead of another surgery, we could just zip it open, take out the cancer and zip it back shut.” Why didn’t my doctor think of that?
This morning during coffee break my always-laughing friend Betty admired my scar and said,
“They really sliced you open this time!”
It really was fair game. When she came to church with a band-aid on her nose covering the spot where they removed skin cancer I glibly asked her if she cut herself shaving.
I guess we’re even. 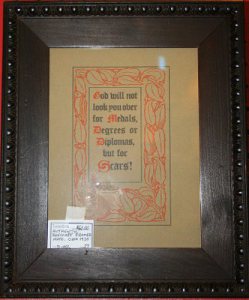 I loved the saying on this framed text in an antique store.
Not enough to buy it, just enough to photograph it.
By the way, I saw this two weeks before I found out my cancer had returned.
Share
Pin
Tweet
Email
Print