Warm weather  and weekends are for projects, or so women think.

Warm weather and weekends are for relaxing, or so men think.

Spring is getting closer and our Honey-Do Lists are getting longer. The longer the list gets, the higher chance you have for marital conflict.

I asked my husband for his insight on the  Honey-Do List.  Oh boy, did I get insight.  I should have asked him when we got home from the honeymoon and saved myself years of frustration.  This is a direct quote. Hang onto your office chairs, ladies.

His admission also proved this post  could have been titled, "The Man Who Betrayed All Men.”

Apparently, the 1st time I ask him to do something, he views it as a "SUGGESTION."

Hubbster explained, "I don’t want to act at this point because I need to discern if it is a suggestion or is really critical. If I hear about it for about six years, then I know it’s important."

When he heard me typing 90mph, he started laughing.

AS A WOMAN, anything that comes out of my mouth is important, so I assume I should only have to ask once.

AS A MAN, he knows I change my mind, my plans and my priorities, so he wants time to discern my asks.

The Honey-Do List can cause friction in marriage. After all, there are things only a man can do. I realized that after trying to pound a 16 penny nail into solid oak. I pounded and pounded and pounded, and couldn’t get the nail to go in. I thought it would be an easy project. I was wrong.

I ended up pounding the oak floor  in frustration instead of the nail. Yep, I did. Yep, it made me feel better. Nope, the shelf in the closet never got hung. I just couldn’t do it. Later, my laughing hubby explained how to drill holes in the wood first. It proved a point to both of us. There were some things he needed to do for a variety of reasons.

During the years my hubby traveled  for work and I was at home with six small kids, many things got broken. Many of those broken things didn’t get fixed. The pile became a source of irritation for both of us. To me, it symbolized his failure. To him, it symbolized my nagging.

At my next garage sale, I made a huge sign that said Honey-Didn’t Do and marked the broken items a dollar.  They all sold to retired men looking for things to do and women who had mastered DIY. Hubby and I both got a laugh, the list was knocked down in size, and I never missed those broken items. 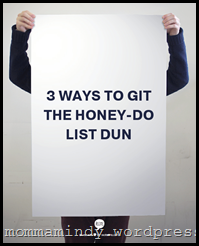 Let the list do the nagging.  I bought cool little whiteboard for his side of the closet. The wall was textured and the sign kept falling down. I bought more double stick foamy stuff and used a ton. Didn’t work. I was gunna’ pound a 16 penny nail through the whole thing, but that hadn’t work 20 years prior, so I figured it wouldn’t work now.

I brought the whiteboard to the thrift store. However, the few weeks the thing actually stayed on our wall, it worked. He liked the idea of not having to remember the list and having the ability to do them in his timing. Now I keep a simple paper list.

Learn a new skill.  Bing it.  YouTube it. I divide my list into  Honey-Do and the  Honey-I-Dun-Did-it-Myself. Relieve some of  the burden if you can.

3. HELP THE HONEY HELP YOU

I needed a coat rack hung in the downstairs hallway for bathrobes.

They were in the way on the closet doors. 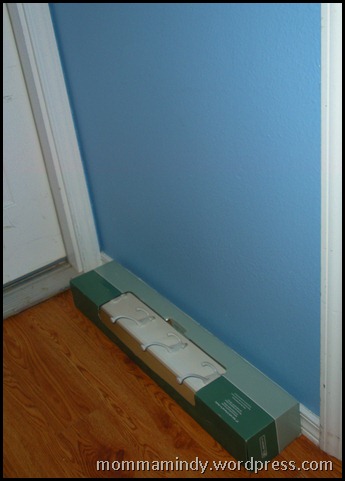 I bought the coat rack I wanted.  The tools he needed were added to the pile.  When he came home from work I showed him the task.  It was done within the week.  I praised and thanked him.

It worked so well, the next week he asked me if I needed anything else done, since he was running to Home Depot.  I asked him to buy a white towel bar for the bathroom.  A few hours later, he brought me down to the bathroom to show me the finished project.

He was as a proud as a kid with a homemade clay ashtray. 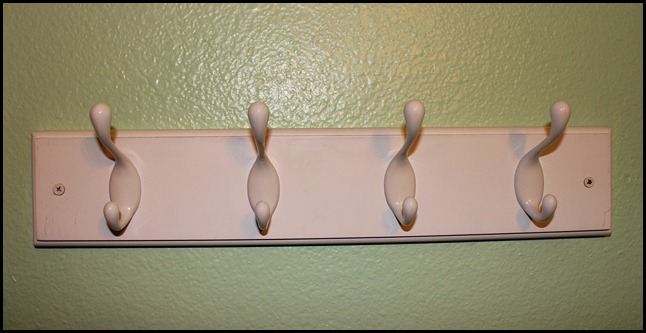 I smiled and stammered and said, “Well, thank you, honey, but that isn’t a towel bar.”

He stared and stammered and stared some more. The gerbils were running their guts out to process the information.  Coat rack….towel bar….coat rack…towel bar…

“OH. I used glue and screws and it will NEVER come down.”

We now use coat hooks for our towels.  In the PNW it isn’t the best option because towels don’t dry quickly.  But, he was able to git ‘er dun, so we’re making the thing he dun got dun make do.

Speaking of git ‘er dun, this blog is done.  A three day weekend is coming up and I have to write my current Honey-Do List out.

Previous Post: « Guaranteed to Translate Every Language in One Simple Step
Next Post: Women Vietnam Vets – Loved and Not Forgotten »