Just when Scott thought his life couldn’t get any better, with three daughters and a son, 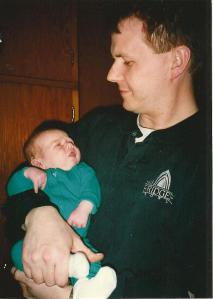 he had another son. 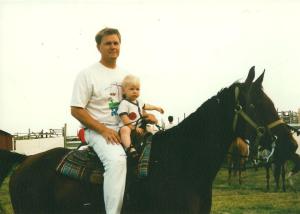 A son so feisty, ambitious, rambunctious, adorable, and hyper, 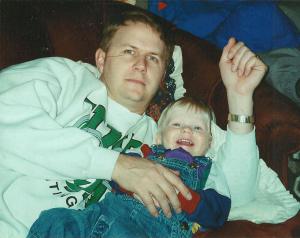 it sometimes made his Gramma shudder at his shenanigans…because he was the spittin’ image of his Daddy. 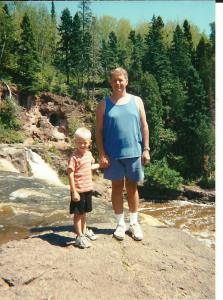 And spittin’ image is the correct terminology, since the men in my family have this thing about spitting into water. 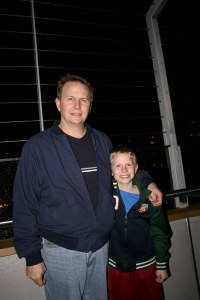 The famous measuring during a hug- I know he is wondering when he will be as tall, or taller, than his Daddy. 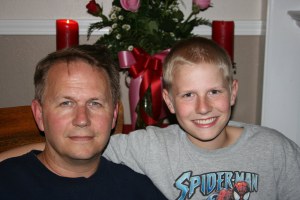 A son wants to be like their Daddy, especially when they know he is a man worth measuring up to. 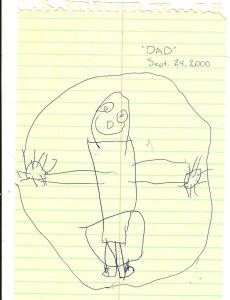 If Dad’s really had ten fingers on each hand, wouldn’t a back scratch feel AWESOME?

Jon was four years old at the time.
I think that circle around the middle is supposed to be Dad’s chubby tummy. (This was while he still ate chips and didn’t exercise.)
*****

One thing I remember about Father’s Day (well any holiday that involves cards) and always will is Dad is big into cards, homemade cards especially.

Someone in our family (who shall be nameless) is notorious for running downstairs right before card time and scribbling out a card.

So, this Father’s Day I made a trophy and super nice card, I put those away and gave him a beat up lined piece of paper that had chicken scratches saying – Happy Father’s Day Love you-Jon. 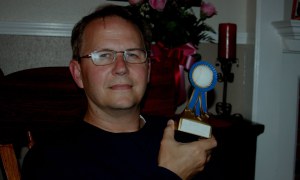 He took it serious at first, read it and set it down. Then I whipped out the card and trophy and gave it to him, everyone started laughing hysterically. But, I appreciate Dad for wanting a nice homemade card that’s sentimental.