Monday morning my husband kissed me good-bye on his way to work and wondered outloud if I was going to be all right for the day. My parents were back in Montana and he was going back to work. I was only one week out of surgery and he was worrying a little about me. I told him I would be fine.
Isn’t that what we always say? FINE? And isn’t it usually never fine?
Rebekah had learned to cook eggs that morning, so we enjoyed a peaceful breakfast, eating and chatting leisurely. Before I knew it, there were rumors of blood and shrieks and the general turbulence of noise that crescendos whenever anything remotely interesting is happening around my house.
My quiet child, Gracie, came screaming up the steps. “Mom, our cat is dying! There is blood everywhere!”
Bethany complained, “There’s blood all over my bed!” The child who had just painted her walls light blue and purchased all white bedding had a valid complaint.
Jon added to the commotion. “Oh, yea, I saw blood all over downstairs this morning, too.”
I was wondering why this revelation was a P.S. added into a conversation and wasn’t the morning headlines. Slightly sarcastically I asked, “So why didn’t you feel that was something that should be made known earlier?” I lectured a little more on those mommy things like germs, responsibility, and vented whatever other steam needed to be released.
He shrugged and said, “Well, I wiped some of it up.”
Meanwhile, I had a cat who was bleeding and a bunch of kids who were panicking. They had determined that the blood was coming from the end of the tail, but I didn’t wasn’t sure what to do. But, I knew who would – my bestest neighbor, Kelly-Across-The-Street. I call her this in a fond remembrance of a childhood friend named Curt-Across-The-Street. She has two young kids, a dog and her dad was a doctor. Somehow I knew she would know what to do. Young Moms always have great ideas. They are fresh in their parenting and in their formulations for solving all problems. Old Moms are tired.
Before I even had finished my second cup of coffee, I was on a knowledge quest. I knocked on her door and told her I needed some free advice. I described the cat’s tail, not really admitting that I also didn’t want to pay a vet bill if I could avoid it.
“I actually know what to do! I had this happen to a cat of mine once,” was all I needed to hear. She brought out Steri-strips and described how we needed to shave the tail, disinfect and tape the skin back together. While I was there, I made her look at my stitches, too, asking for her advice if she thought I looked infected. I was still very sore and red and the skin on the right side of my body felt like a sunburn, It was sore to the touch and when you did pressed down, it left behind white fingerprints. She agreed that I should probably try to get into my surgeon before the scheduled appointment on Thursday. 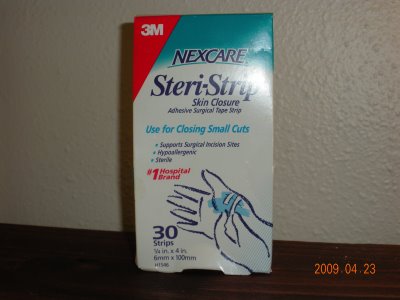 How could I have parented for almost 22 years without knowing about these cool things? 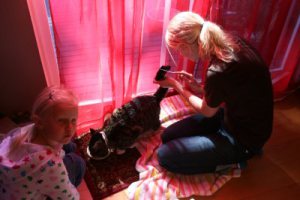 Since Grace used to want to be a nurse, she had to do most of the shaving and repairing.

When the cat was finally shaved and bandaged, not sure if it looked as Kelly had instructed, we let him go, began disinfecting the house, soaking clothing and blankets in cold water, and thought we would enjoy a peaceful lunch.

Jon came to me, begging to take a shower before lunch. He said, “Mom, I look like a Civil War surgeon!” He did, and for once I didn’t have my camera to capture the moment and illustrate his very home-schooled description of his condition.

Beka asked if she could play outside for a few minutes while I made lunch.

Did I say peaceful? The next cry was from Rebekah.

“Mom, little Norah fell off the ledge at her house and broke her arm.”

I hurried across the street, following the sounds of a very distraught little girl. I met Kelly at her front door. She holding a crying child and a diaper bag with a confused look on her face. My extremely capable neighbor, the mother who teaches me things, looked so sad and said, “I don’t know what to do.” A hurting child can do that to a mother, the ache for them is so great, you lose your ability to focus on anything else but their heart-wrenching cries.

I held little Norah while she administered Tylenol and called the pediatrician. Because the break was near the elbow, he directed us to the emergency room. We spent several hours together, doing the things Moms do in times like this, chatting and entertaining a precious little one who is suffering a great deal. I thought it sweet that Norah’s favorite toy was also from Build-A-Bear, an adorably fuzzy gray cat she calls Miss Kitty. She cuddled her all day and made me wish I had brought my monkey.

By 3pm, it was determined that Kelly needed to take Norah to Children’s Hospital.

As we parted in the hospital parking lot, I hugged Kelly and told her it was the best day of my life and the worst. It was the worst because we survived several tragedies, although the kitty tail was awfully unimportant compared to Norah’s precious little arm, but we rejoiced that we were together. We were true neighbors and true friends.

It reminded me of the time, several years ago, when that House-Across-the-Street was sitting empty, and my heart was so lonely I thought I could die. I prayed and prayed for whoever would buy that house and I determined we would be friends, whether the wife wanted to be my friend or not. I knew I needed someone. But, the Lord knew that Kelly needed someone, too. She moved from the other coast with her hubby and two very little kids and was as lonely as I was. It was Friendship at First Sight. Within days, we were in and out of each other’s homes and lives and have shared a great friendship. Today was proof. As we hugged in the parking lot, we both rejoiced in that knowledge that we didn’t have to walk those hard days alone.

To read her version of the Most Horriblest, Wonderfulest Day click here.