I found a memory while digging through my
cedar chest.
A chunk of hair. 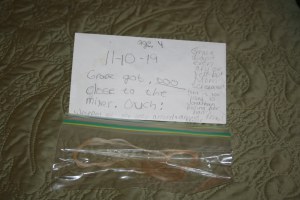 I had put it in a ziploc bag and  had one of the kids
write a brief description of what happened.
I was wise enough to know at the time,
that I would forget what happened.
I was right.
This traumatic situation had nearly evaporated from my mind,
the evidence only vaguely prompted a memory.
My kids are in the kitchen at a young age,
but I can’t imagine that I actually had a 4 year old
running an electrical applicance unattended. 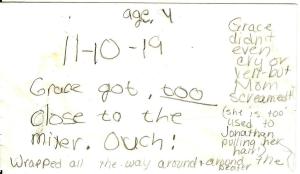 But, apparently I’m not the only one with memory issues.

When I asked Grace if she remembered anything
about getting her hair caught in the mixer,
she couldn’t remember details.

I tried to prompt her memory.
MOM – “Do you remember what house were we living in, Grace?”
GRACE – “Oh, this one.”
MOM – “That can’t be.  It says you were four years old.”
GRACE – “Well, then I did it twice, because I did it once in this house.”
MOM – “Are you kidding? You got your hair caught in the mixer twice?”
GRACE – “No, I’m not kidding. We have pictures of it.”  She walked towards my computer then stopped.  “Oh, I guess it wasn’t my hair that got caught in the mixer, it was a wooden spoon.  I was trying to scrape the edge of the bowl, but didn’t stop the mixer and it got caught in between the beaters.”
That explains it.  No wonder I had to buy a new mixer and why the other new mixer only lasted a year.
It also explains why when people tell me how “lucky” I am that I have kIdS iN tHe KiTcHeN,
I always give a little shudder, because LUCK has nothing to do with it.  More like insanity.
Their comments also show they haven’t read my blog about my stove, broken eggs, dipped pretzels,   messy cupboards, or my cooked cutting board.
And, apparently, they haven’t allowed their kids in the kitchen much, or had the privilege of pulling a huge wad of hair or a wooden spoon out of their beaters.
I guess I am just “lucky.”
Share
Pin
Tweet
Email
Print