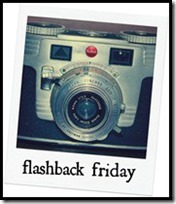 It was a crushing high school disappointment.

My goal was to be the  president of the Future Farmers of America my senior year.  I planned to run for state office the following spring, then maybe national office. They were ambitious, teenage plans. I’d gone to regionals in extemporaneous public speaking, won awards in livestock judging, won Star Greenhand, and had been FFA Sweetheart.  I thought my accomplishments and investment into the local chapter proved my ability to lead.

My peers, a room full of farm guys, didn’t agree and I was elected secretary. In a 9 to 5 move, I refused the position. I’d already been the FFA reporter for two years and accepted that nomination instead. My friends were also elected to office,  Janet, vice president, Christine, parliamentarian, and Jeanette, treasurer, making 50% of officers female.  I was excited for my gender and my friends, but was personally disappointed.

The election revealed deeper obstacles in accomplishing my goals.  If I couldn’t convince the local chapter I was competent enough for high office, could I convince the state or the nation?  Even more than a matter of personal ambition, it was a matter of belonging.  I loved the farm life, but I wasn’t blessed with an ancestor who homesteaded.  My grandfather, Arne Sather,  was a talented carpenter from Norway, who built country churches and barns that still grace the North Dakota landscape.  I lived on a farmstead with my family, but we didn’t farm.  I identified with my farm friends, I longed for their lives, but did I really fit in?

For the final weeks of the school year, I wrote about FFA activities and brought my articles the newspaper office. Reporters were judged at state competition on the amount of pictures and  column inches printed and I was determined to win gold. 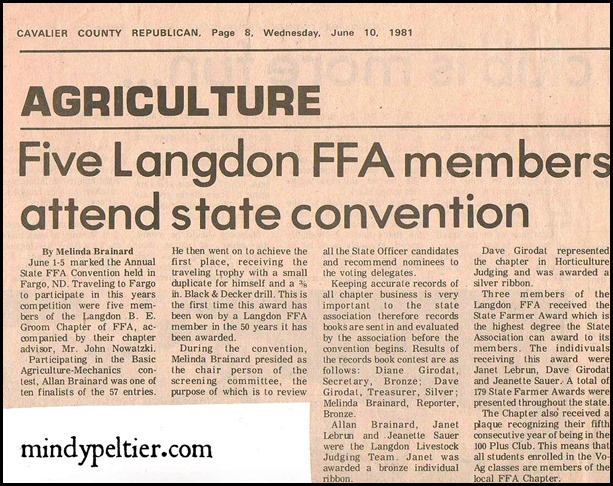 When I dropped off this article, the new editor introduced himself and offered me a job on the spot. It was official, I was an FFA reporter and a Cavalier County Republican reporter. My life instantly changed course.

I was slow to understand the cause and effect of disappointments and accomplishments.

Another crushing disappointment occurred when I was a happily married mom of six kids.  We purchased our dream home in August of 2003, an older two-story home with arches, woodwork, many windows, and a library.  In the master bedroom, a perfect alcove positioned my writing desk under a window overlooking the trees and grassy acres of the nearby college.  We were city dwellers with the country feel. I loved that house and joked many times, “When I die, just doze the house and bury me with it.”

In September there were whispers that my husband would be relocated to Seattle.  I cried for a week.  I feared the city and didn’t want to leave my friends, our home Bible study,  and my new home.  By faith,  I put on my “I-go-where-he-goes, his-people-become-my-people” attitude. In May the rumors were confirmed, and I packed up everything from the home I planned on dying in and headed west.

The Lord always has a plan and a way we cannot see.

Not fully knowing the layout of the land, we  bought a house halfway between his job and our church. I discovered I was four blocks from the meeting place of the Northwest Christian Writers Association.  Four blocks.

I’ve been so slow to learn the Lord’s “No” is often, “I have something better for you.”  If I’d been elected president, I wouldn’t have been offered the reporter job.  If I’d stayed in my comfort zone of familiar friends and family and my dream home, I wouldn’t have found my Christian writers group and rekindled my writing career. This year I was thrilled and honored to be elected president of  NCWA. The first person I called with the good news was Janet, my best friend from high school. 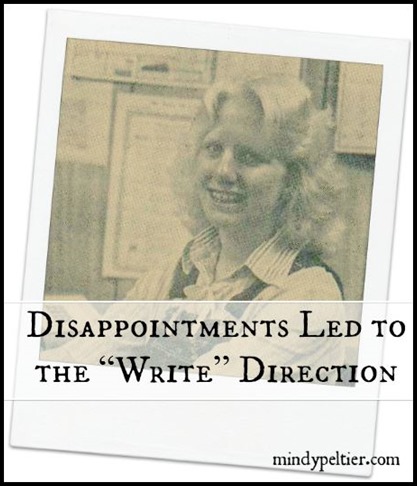 The Lord used disappointments to change my course of direction and to guide me in His “write” direction.

When you surrender your dreams, the Lord will fill your heart with His.

Previous Post: « No Help in Sight for the Toilet Paper Trustees
Next Post: When Going Green – Isn’t Green »