I come from a long line of thrifty women. My mother has a tiny pair of undies from her childhood that say “sugar” on the bum to prove it. My grandmother made quilts out of old clothes, fabric scraps, and lined them with old blankets when she couldn’t afford batting.

Leftovers were the basis for another meal and every plastic container was saved. When Gramma Geneva was in the beginning stages of Alzheimer’s, a few relatives helped her clean and organize her home. It went well until Gramma caught Aunt Hedi trying to smuggle out a garbage bag full of old margarine tubs and Kentucky Fried Chicken buckets.

Opulence in America brought a lot of waste. It’s refreshing to see the younger generation getting back into practical living. Social media has given us the ability to glean from these creative geniuses who are doing the things our ancestors did, but with a vibrant way of displaying and sharing that inspiration.

But, sometimes people just don’t get it. Many sites  brag about hundreds of crafts made from recyclables and their ability to turn household discards into crafts. They dig in their recycle bin, glue stuff together, add glitter, pom-poms, chenille stems, felt, paint, jewels, and buttons to create something interesting out of an egg carton, empty pop bottle, or a tin can. 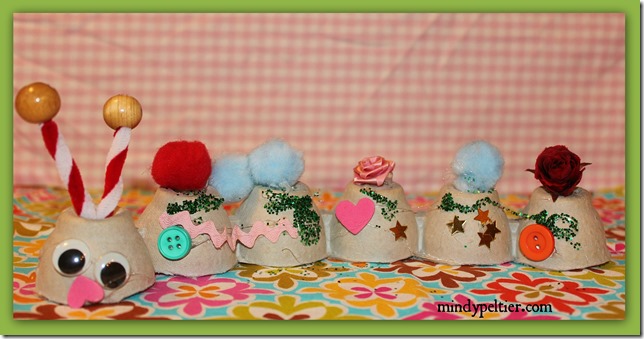 (Disclaimer – only a small portion of this egg carton was turned into garbage for the sake of this blog.)

The irony is, often they’re taking perfectly good recyclable materials and turning them into garbage – literally – because once the receiver of this gift is done with it, it’s no longer recyclable. It’s garbage because glue, paint, glitter and other substances aren’t recyclable. But the whole point of recycling is, well, to recycle the materials by turning them into something useful that will be used for a long period of time.

This little caterpillar is adorable, but a mommy or gramma would only display it proudly for so long and then toss it. Crafts like this usually aren’t passed onto  future generations.

SO, they start with environmentally friendly recyclables and craft them into  landfill.  When is that considered green? Isn’t that the same as not recycling in the first place?

It’s that hypocrisy against the very ideals you are touting?

If you really want to go green, create something worth keeping.

This is the quilt my Gramma Geneva made for my wedding 28 years ago.  She and mom conspired together, and mom provided fabric scraps from items she had sewn for the family.  My sisters and I look at this quilt and say,

“Oooh, that was my favorite dress!”

“I wore that skirt for homecoming.”

I didn’t inherit the quilting gene, but I learned from their ability to save material and make useful items from them. 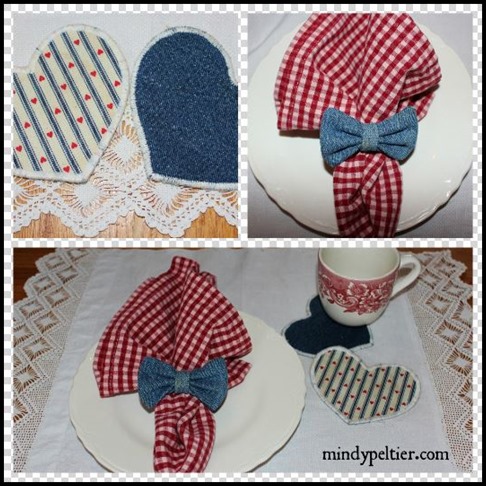 My siblings laugh when I use these denim napkin ring holders because of the story they tell. My brother, Lee, was helping mom and dad paint the house one summer.  He was also trying to memorize Greek roots so he could read the Septuagint.  Yea, he’s a brainiac like that.  Anyhoo, while balancing on the fully-extended ladder, painting with one hand and holding index cards with scribbles on them in the other hand, he spilled the entire can of Georgia Clay paint.

The splatters on his jeans dried while he was washing the orangey-brown color out of his blond hair, so he was going to throw them away.  I cut out the good fabric  and hauled it around in my fabric scrap bag for a few years before making napkin ring holders as a young bride.  A few years later the rest became heart shaped coasters. He laughs about it now, and my crafts have kept the story alive for decades.

The Lord is the King of green. He doesn’t  merely try to make something out of us.

He makes us vessels fit for use.

He gives us gifts to use for Him.

Don’t settle for recycling  yourself through gluing on self-reform and self-imposed religious rules.  Allow Him to do the work in your life, transforming, renewing,  and refining. It’s hypocrisy to deny the power of the resurrection and the power of the written Word of God to remake yourself into someone you think is acceptable to God. Without faith it is impossible to please Him. 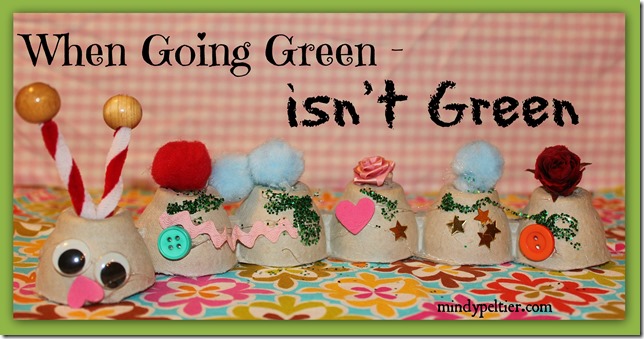 When He’s turned us into a new creation through our faith in His Son,  we’ll be proudly placed in a mansion in His Glory…

…because He makes us worth keeping.

Previous Post: « Disappointments Led Me in “Write” Direction
Next Post: Look, look. Look up. Look up at the Word Cloud. »