Flying over some of the tallest mountains on the west coast, their majesty was preaching a sermon to my heart.  The sunny day revealed every crevice and peak. 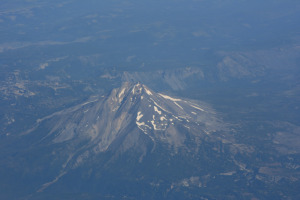 It took pain to make a mountain. Their glory and splendor was created with a  great amount of suffering, as the earth’s plates collided or underground volcanic activity forced the earth’s crust upward.

Mountains perfectly represent our sufferings and trials.  When we need to overcome a sin or master a new skill, it is a mountain to us.  Even the daily grind of living can seem as though we are ascending a great mountain and we can weaken under life’s load as our feet struggle to find a sure path.

From human perspective, the mountains are huge. Climbing them takes preparation, equipment and stamina. It is never easy, even with a path made by previous climbers. Once on the summit, the climbers forget the pain as they rejoice in the glory of being on the top of the world.

From a Boeing 737, I gain persepective. The mountains are molehills. I can see which slope would be the easiest to conquer. I can see where the most snow is and the rockiest ledges.

I was imagining how easy it would be for climbers if a guide was above in an airplane.  What if the guide had written  a guidebook for each mountain, laying out every obstacle and the surest way to victoriously conquer the mountain?  What if that guide also had a little earpiece in the climber’s ear, so he could directly speak directions as the climbers ascended?

“You’re getting a little off the path.  Start heading to your right.”
“There is a rocky ledge ahead.  Be careful.”
“You must avoid that area, follow the guidebook, I wrote very clear objectives.”
But, would the climbers listen? Would they think they knew a better way? Would they risk the rocks, thinking that they would never fall? Would pride tell them they could be the one person to scale the mountain without advice? Would they listen to the voice, or would it become a droning in their ears? Would they say the advice was outdated and they had a new, improved way of ascending the mountain?

Or, if they did use the guidebook and listened to the voice, when they conquered the mountain would they forget the guide on the downside? Would they run back to the flatland, filled with their own pride and power in conquering the mountain, and not give credit to the one who led them to the high places?

Or would they go back down the mountain and spread the news of the greatest guidebook to conquer the mountains and praise the voice that guided them to victory?

Would they pass out the book and teach others to heed the voice? 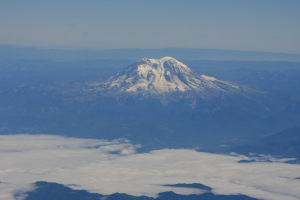 When you think your mountains are inconquerable, remember God’s point of view.

Psalm 33
12 Blessed is the nation whose God is the LORD,
the people he chose for his inheritance.
13 From heaven the LORD looks down
and sees all mankind;

14 from his dwelling place He watches

all who live on earth-

15 He who forms the hearts of all,
who considers everything they do.
18 …the eye of the LORD is on those who fear Him…
19 To deliver their soul from death…

Remember, He wrote a guidebook and He’ll whisper the directions in your ear.

When He makes your mountains into molehills, remember to praise Him.