Yesterday, I introduced the first of the 2 things
I had to learn about raising my adorable monkeys.

I called this, Monkey Be, Monkey Do.

Monkeys don’t need to see to do, monkeys do because monkeys are.

However, in addition to their own sin nature, our kids have another downfall to their behavior. 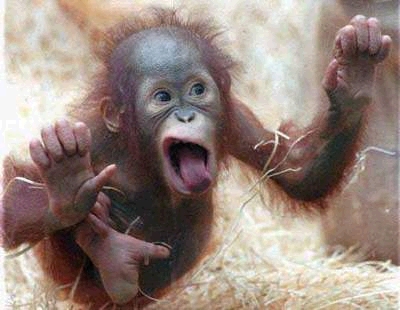 2. Their parents have a sinful nature.
( I included my husband because I don’t want to take all the blame. )

Even with the new nature that comes through salvation, the old man still shows up.

I have a temper.
I’m not always kind.
Sometimes I gossip.
I harbor bitterness in my heart.
I can be a bad example.
A memory from my early years  in parenting still sears my heart. I was frustrated and slammed a kitchen cupboard door.
Really hard.
Really, really, hard.
The sturdy wood made a resounding bang that soothed my ruffled soul. It felt good, until my little precious toddler waddled over to the same cupboard door, slammed it, then looked up to me with a few-toothed smile, waiting for my approval.
Instead, she broke my heart.
I wondered how I would survive parenting when I couldn’t even survive my own sinful self.
Twenty years later, I’m still wondering.
Only now, I live in a house where the cupboards are plastic and pressboard, and when I slammed a drawer shut soon after we moved in, it broke. My husband has fixed it several times,  but the awkwardness of the drawer and the dried dripping glue is an ugly insight into to my own soul.
I have grown, but not enough.
But, lest we become discouraged and throw ourselves down in disgust,
there’s hope, it’s called forgiveness.
The Lord doesn’t call perfect people
to become parents,
He calls parents
to become perfect people.
The book of James explains we become perfect through trials. That’s why the same things happen over and over. We face it until we conquer it.

It’s a hard job,
being a sinner
raising sinners
to not sin
against a holy and mighty God.

Isn’t it wonderful
our holy and mighty God
helps us not sin
while raising sinners
to not sin?

It means confessing sin and apologizing to our children. Admit our struggle to our husbands and ask for prayer.

Sometimes, it means asking an older woman for help, encouragement, advice.
As we deal with our sin,
we teach our children how to deal with theirs.
If we try to gloss over it and blame it on hormones or lack of sleep,
we’ll teach them to do the same.
If we harm relationships and don’t heal them,
we’ll teach them to do the same.
If we don’t forgive others when they sin against us,
we’ll teach our children to not forgive us when we sin against them.
So, there’s hope, there’s joy, there’s a way to bring the Lord glory in all our failings.
As our precious little monkeys see us turn to the Lord for forgiveness and strength,
they will do the same thing.

Because Monkey See, Monkey Do.