Two friends and I decided to leave the comforts of the city – rush hour traffic, houses so close we hear noises from our neighbors we would rather not hear, demanding jobs and the incessant buzz of sirens, traffic ‘copters, dogs, and my six children – for the peace of Whidbey Island for a cozy girls getaway. 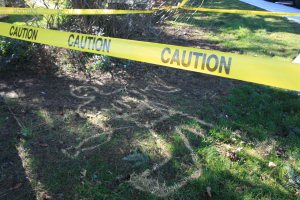 We were greeted with this gruesome scene on Anthes Avenue in Langley. We astutely noticed the fish outlines, the club foot, the extra hole in the forehead and the initials VM. We knew we had discovered the Crime Scene. With a chill in our bones, we began our investigation. The town coroner revealed at noon the discovery of two more sets of bones with the same M.O.D. My abbreviation, taking poetic license because I lack the correct investigative terminology, Method of Death. We now knew were were in the throes of solving not one murder, but three. 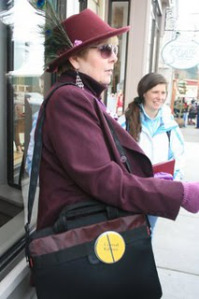 The FBI Agent Professor Plum Peacock, or was that Peacock Plum, was called in to investigate the murders. After studying the evidence, the bodies were identified by the town coroner as Xavier Rhalston, Fashion Designer missing since 1985, Xerxes “Quaker” Oats, Rock Star missing since 1997 , and General Victor Mills, still fresh on the slab. With these horrific facts, she grimly determined she was chasing a “Cereal Killer.” However, her lack of time spent investigating and her time spent speculating and hyperventilating on the streets concerning a certain reoccuring Dead Squirrel and the transient Red Spoon, led us to wonder how it came to be that SHE was in town for each of the murders, committed in 1985, 1997 and now 2009? Everybody is a suspect in February in Langely. All are guilty until proven innocent. 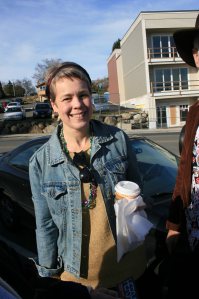 Our first suspect to meet and greet and grill was Candace Barr, Candy for short. Seemingly innocent, she showed us the contents of her portfolio – an advertisement for very expensive furniture. Apparently, the town gossip went, she and her husband were busy buying many things for their new home. Hmmmm…it was also revealed in hushed confidences and paper clues, that she had been rejected as a model by Rhalston, rejected as a singer by Oats and we had yet to discover her connection with the third victim. 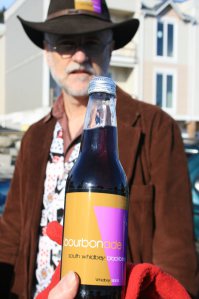 Her husband, Hershell Barr, had the same innocent exterior, but clearly harbored many deep, forboding secrets. Displaying his bottle of “bourbonade” he claimed the still the deceased General Mills discovered was really only a home elixir mixer. 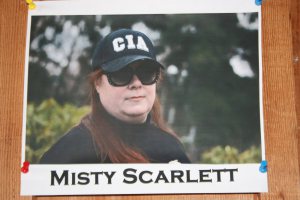 Personal attache’ (doesn’t that sound like a piece of luggage?) of the most recent victim, Misty first appeared to be a distressed and grieving loyal employee. It was soon revealed that she, too, had been rejected as a singer and a model. Could her final rejection from General Mills, who refused to marry her, also have been the final murder? 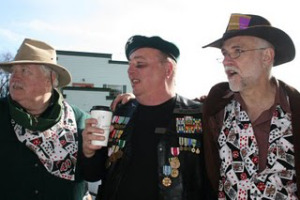 Illustrious and devious members of the 49’ers, these men reveled in money the same way the miners in California did, although they didn’t have a Sutter’s Mill, they had a still. They also had the industry of producing Chocolate Banana Slugs, an industry General Mills was going to commandeer to feed the poor in the third world countries. They had recently come into a large sum of money, enough to build a new office building and an apartment complex. The two bodies, by the way, were discovered buried deeply on their property. Plenty of motive, plenty of money, and plenty of alibis. 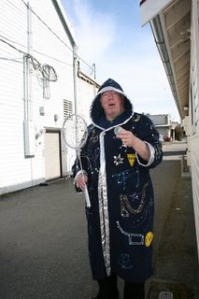 Zaud Eack was the town goofball, not wise enough to be helpful, not helpful enough to be wise. He just took delight in the fact that he had these cool little lights he could illuminate around his over-sized hood. His murder alibi? He passed out at 9pm, under the stars after drinking too much bourbonade. Yea, the same bourbonade the 49’ers claim is a juice healthy enough for children. Zaud proudly boasts his ability to “heat the bourbonade until it becomes an adult beverage.” He claims the youth of the town don’t know this dirty little secret, but we were beginning to wonder if there were ANY innocent in this beautiful seaside paradise. OK, sound side paradise, whatever. It’s just geography.

Who would have more motive than this Pisceolgy leader, Maggie MacRill, who appears in town every 12 years for the spawning of the Saratoga Silver Salmon, her beloved fish? She has devoted years of her life to these creatures, and graciously, but firmly, berated the 49’ers, who pump residue from their still into the spawning area of her beloved slippery, scaled salmon. An intense study of her religion shows that she wouldn’t kill, but she would send a Barracuda to do it. However, her current Barracuda was a rosy cheeked youth, Mickey Finn, who VOWS he NEVER heats up his bourbondade when he drinks it, and was too young to have committed the first two murders. But, she WAS in town for each of the murders! 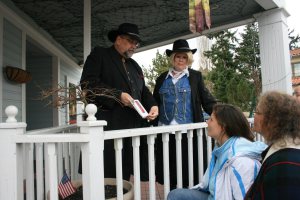 Yvonne and Terry listen intently as Ralph Channel and his wife/model Twiggy Liam, show their new line of clothing, something to do with the west and full figures. She is gorgeous for her age, but seems pretty hardened. Anybody who can stand in public and let her husband call her “full figured” and many other obnoxious things, could be hard-hearted enough to kill three men? Couldn’t she? Is Ralph’s life now in danger? 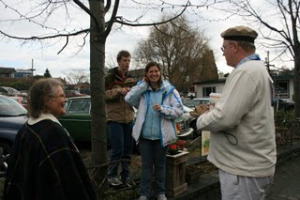 Dave joins us on the final afternoon, just in time to grill Mobey White, another highly-ranked Pisceologist. He wears his symbols well, but didn‘t show enough passion about the illegal still, the bourbonaid-heating youth of his town, the many women devestated by the betrayals and unfailfulnesses of the three deceased victims to ever have an opinion about anything other than those silly silver salmon. 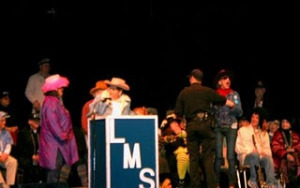 After casting our final votes, we anxiously awaited in a crowded school auditorium, with painful high school flashbacks reverbrating in all of our brains, while the town marshall, I.B. Fuzze declared each suspect, one by one, innocent. In a dramatic finale, worthy of a Hallmark movie, (oh, that’s right, they did that last year) her dear neice, Bunny, was declared the murderer of them all. After all, she had the oldest gun in town. Yvonne and Dave guessed correctly! I voted for Misty, banking on the rejection theory.

It was that simple?
And what ABOUT those silver salmon ceremonially draped over each body? What did that have to do with anything, anyway?
Share
Pin
Tweet
Email
Print