Young children love to declare a day as an oPpOsItE dAy.

On that day “yes” means “no” and “no” means ‘yes.” Then they ask you questions they KNOW you’ll say NO to, but claim you really meant yes, because it was oPpOsItE dAy.

They go to great lengths to do the opposite, wear their clothes backwards, walk backwards, and perform whatever antics they can create that would be opposite of normal and acceptable behavior.

But, why would they think they had to designate an entire day to that when in reality, with a child, every day is oPpOsItE dAY?

What mother doesn’t know the frustration of finding an empty gallon of milk in the fridge, with barely enough milk to trickle out when you hold it upside down over your bowl of very dry cereal. And what mother hasn’t known the further frustration of finding, the very next day, the new gallon milk left out on the table? You usually don’t find it until it is blueishly lukewarm and the chunks must be poured down the drain.

How about the laundry? Doesn’t it just go without saying that the clean clothes will be thrown onto the floor, tossed and kicked around for a week or so, then returned to the dirty clothes hamper, sometimes still folded as neatly as they were when you first placed them in their rooms? And, doncha’ know, the dirty clothes will be carefully shoved back in the dresser drawer, under the bed or in the closet, just in case they can be worn one more time.

But, the oPpOsItE rUlE applies to other areas of daily life, as well. As a child I despised eating my crusts. We lived on day-old 10 /$1 bread that had been in the freezer for months (or years?), being mish-mashed under a pound of freezer-burned hamburger or a two-year old venison roast. I struggled through years of eating those dry particles and mastered the art of applying the peanut butter and jelly carefully up to the edges, trying to soften the dryness of the stale crusts. Naturally, when I became a mother, I declared to my children that they wouldn’t have to eat their crusts. I always made their sandwiches, cut the crusts off, sometimes cutting the bread into fun shapes with cookie cutters, and presented this love offering for lunch.

As the kids grew older and began making their own sandwiches, I noticed they all left the crusts on and ate them without problems, and were only cutting the crusts off for the sandwiches they made for me.

One day, I finished my lunch and was ready to toss the pile of crusts into the garbage can when my then five year old- Rebekah, rushed after me. “Wait, Mom, I LOVE to eat the crusts,” then proceeded to grab the crusts as they were sliding off my plate into the garbage and to shove them into her mouth. 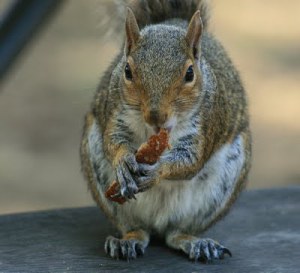 When we went to the zoo this squirrel obligingly ate my crusts for me. Rebekah was full.

I was flabbergasted! Because I was told I HAD to eat my crusts, I didn’t want to eat them, and because my kids were told they DIDN’T have to, they wanted to eat them. It then dawned upon me. This might be a new strategy in parenting! 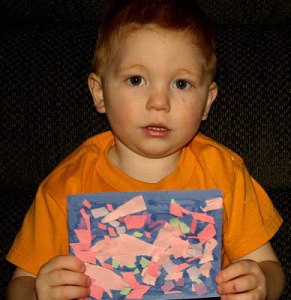 I tried out this new strategy while taking pics of my adorably- impish 3 year- old nephew, Stephen. When I asked him to smile, he drew the corners of his mouth down in an 1800’s-era grimace, then raised his little reddish eyebrows inward and down, expressing his displeasure in being asked to perform. I wasn’t quick enough with my trigger finger to capture his first grimace, but you can still see his lack of enthusiasm. Not wanting this effect, I changed my ask. “Stephen, I decided I don’t want you to smile after all. I think it would look better if you didn’t smile for this picture.” 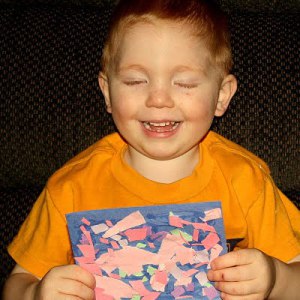 Immediately, I was rewarded with one of those grins that displayed every perfect toddler tooth, down to those adorable little toddler molars. (Too bad I didn’t notice his eyes weren’t open. Doncha’ just wanna pick up this little guy and give him a big ol’ squeeze?)

I’m thinking of rewriting the chore list. I will inform the kids they are not to wash the dishes, not to take out the trash, not to clean the bathrooms and for sure, not to make their beds, because we are just wasting time doing the same things over and over again.

I think it might change the effectiveness around the house, because,
ya’ know,
with children every day is
oPpOsItE dAy.