Parenting and coaching hockey are not for the faint of heart. Both teach young people difficult skills needed to successfully perform pre-determined functions.

At a University of North Dakota Fighting Sioux men’s hockey game I compared my life as a mom to Brad Berry’s life as a hockey coach. He’s a gifted coach, his team won the National Championship in 2015 and 2016, but I came to the sane realization than parenting is harder than coaching.

Coaches have several advantages not offered to parents. 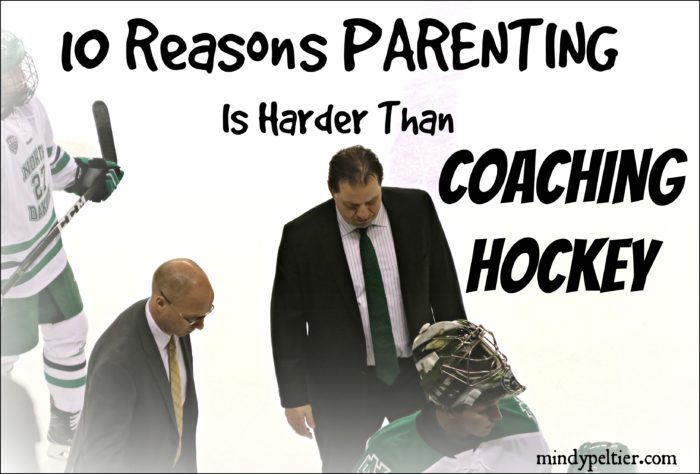 1. There Are Hockey Rules

Despite a bajillion parenting books, there aren’t universal rules. We must feed and clothe them, and make sure they eat and sleep. After that, it gets a little sketchy. Parents sets rules according to the temptations and habits of said offspring.

Feel free to borrow any of the rules we made up:

Hockey coaches abide by the hockey rules and regulations written in a cool book. Moms write their own rule books.

It’s easy to dress a hockey team. Hand them pants, jersey, helmet, pads, and skates. They put them on. They keep them on.

It’s challenging to dress offspring. The first skill to master is catching the breakaway, a slippery toddler who wriggled out of their bath towel and is running naked through the house. Sometimes they escape outside. My 2-year-old grandson made it half-way down the block before I caught him because I was laughing too hard. OK, actually I didn’t run fast because I didn’t want to pee my pants. (Coaches don’t have to cross their legs when they sneeze, either.) The naked escape is a universal toddler conspiracy they jabber about on playgrounds everywhere.

Kids’ clothes have to be the right color, size, design, shape, style, and feel. Elastic and tags itch. Sock seams are annoying. Shirts and pajamas can be too long, too short, too wide, too narrow, wrong color, wrong style, wrong sleeves, wrong neckline, or wrong logo. Pants and underwear can be too tight, too loose, too short, too long, too binding, too baggy, wrong color, wrong style, wrong elastic, or wrong logo.

Despite our pre-parenting intention for our kids to look like magazine models, we resort to accepting any and all combinations of required clothing pieces.

Ever see a naked hockey player? Ever see one wear his shirt backwards or inside out because he thinks it’s cool?

My point exactly. Coach has it made.

3. Hockey Players Break Their OWN Stuff

During the hockey game I attended two sticks were broken, but no teeth. It was a tame game.

Parenting has more collateral damage. Kids will break stuff. Weekly. Daily. Hourly. Toys are most obvious victims because play is kids’ work and toys are their tools. 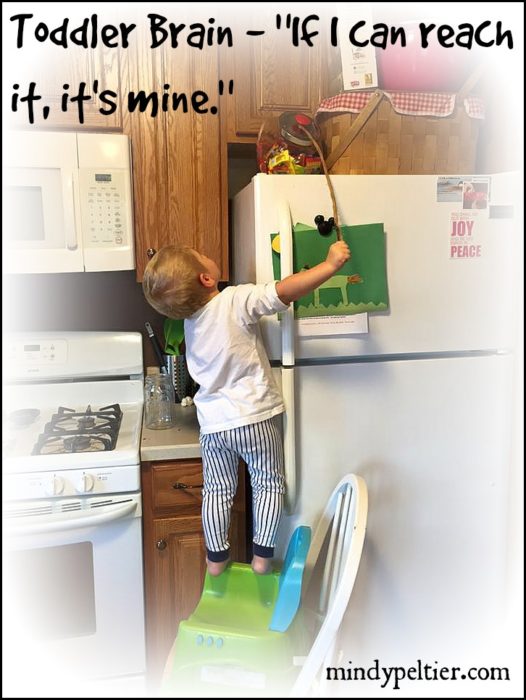 But when they get sick of their stuff, they move offsides to their parent’s stuff. ANYTHING within their reach, whether assisted by a chair, couch, coffee table, dinner table, counter, or fridge, or combination of above said items, is fair game. If the item is irreplaceable,  lock it up until they move out.

A hockey player break his own stuff, not his coach’s.

When my I-can-climb-anything-run-anywhere-hide-anywhere kid was two, I wasn’t concerned about what kind of adult he’d be. I was concerned he wouldn’t live to become an adult. One daughter injured herself walking down the hallway and had several goose eggs to prove it. No matter how much you child-proof, buckle-up, helmet-on your kids, they’ll get hurt.

Take a battle-worn kid out in public and watch the eyebrows raise.

Before mouth guards and face masks, a hockey player with all his teeth probably wasn’t a good hockey player. (Check this blog for proof.) But it never indicated his coach was bad. And, to take care of these owies, the good coach calls in the athletic trainer.

Naughty hockey players sit in a penalty box. And they stay there. They don’t jump over the edge and skate back in the game. They don’t sneak into the snack stand and steal candy. 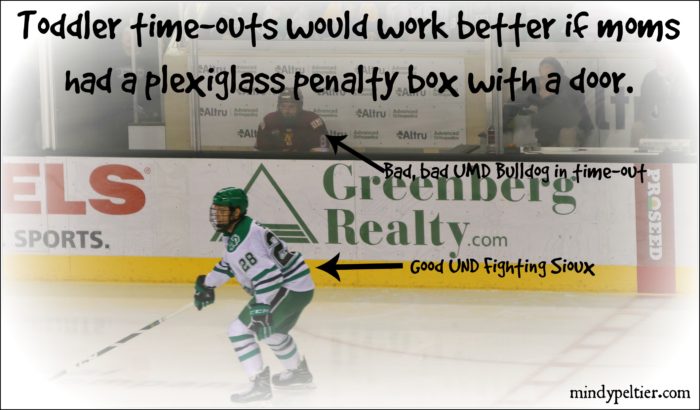 Ever try to keep a two-year-old on a chair? Or in their room? Meanwhile, siblings go on power-play of misconduct because they know mom is busy with the offender.

A hockey coach keeps coaching because he doesn’t have to keep someone in the penalty box.

Hockey fans like a good fight as much as a good goal, especially a bench-clearing brawl.

When kids brawl, we don’t cheer them on, we must determine which of a bajillion miniscule issues caused the fight so we can resolve the issue.

Kids fight over who gets the only spoon with a rose on it, the last cookie, the blue bathtub boat, the purple marker, and the top bunk.

Kids fight over whose turn it is to pick the movie, ride shotgun, choose the radio station, jump on pogo stick, push the elevator button, do dishes, clean the toilet, and take out the trash. 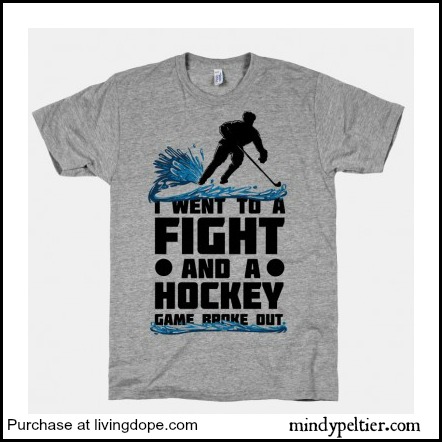 Bing defines a referee as “the person of authority in a variety of sports who is responsible for presiding over the game from a neutral point of view and making on-the-fly decisions that enforce the rules of the sport, including sportsmanship decisions such as ejection.” 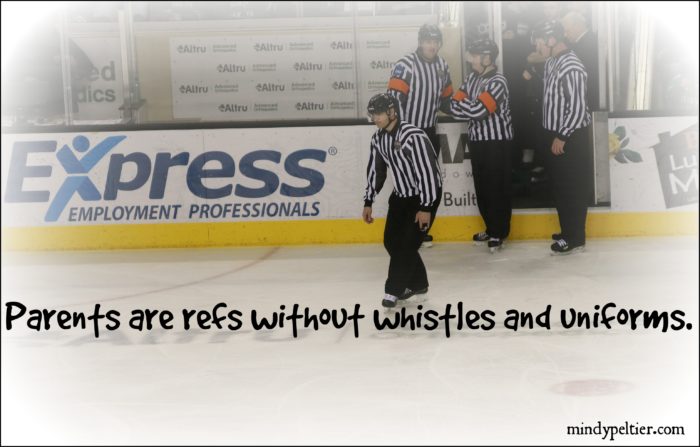 Yep, sounds like parenting.  We spend the day enforcing rules that, as stated in #1, are made up on the fly.

Can you imagine having a ref?

Moms have to be the coach and the ref.

Coaches might instruct players on dietary issues, but the shopping, food preparation, and cleanup isn’t on their duty roster.

In addition to that, moms do all said shopping in the presence of aforementioned little rascals that exhibit a death wish when anywhere near a shopping cart.

Coaches don’t have to deal with kids that refuse healthy food, but, as stated in #1, eat boogers.

Coaching awards dangle as enticing carrots, while we’re trying to get our kids to eat their carrots. (See #8)

There isn’t a trophy for washing 14,600 loads of laundry (that’s only 2 loads a day for 20 years) or for wiping up an accumulated 10 gallons of puke. Nobody tallies the most nights in a row without sleep or how many times we’ve been peed on.

You can read about Brad Berry’s awards here, including the Herb Brooks Coach of the Year Award.  I told you, he’s an amazing coach.

You can read about my awards here. Oh, that’s right. I didn’t get any.

Our invisible trophies are our children’s successes. 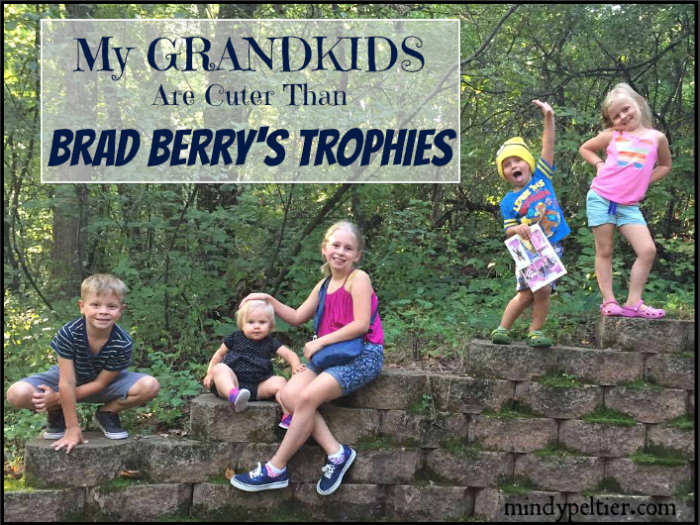 Who needs trophies, anyway, when you can have grandkids?

Do I even need to say explain that a coach doesn’t have to sit in the bathroom with his players and coax them to go poo-poo? Or teach them to wipe? Or teach them how to wash their hands after that lesson didn’t go so well? Coach doesn’t carry spare clothes in his gym bag in case someone has an accident, that really wasn’t an accident, they just didn’t want to stop playing to go potty.

Hockey players don’t sit outside the stall door and whine, “Can I come in?” “When are you going to be done?”  They also don’t trash the locker room if coach is in the bathroom more than 1.5 minutes.

Coaches have a blissful bathroom world.

During their younger years we’re in the game, coaching and refereeing. There are wins and losses and new skills gained.

When they move out, we move into the stands and parent from afar.

We cheer their wins. We support during losses. We cry for their injuries. We worry about our failure when they’re in the penalty box.

But we’re always loyal fans of our favorite team. 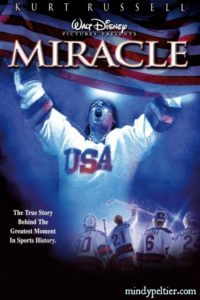 Whether you want to inspire your players or your kids, this is a must watch movie.

During a time where we were dodging under our desks to avoid Russian bombs during school drills,
our USA Olympic team under the coaching of Herb Brooks, took the world by surprise by
defeating the Russians.