Mark 4:37-41
And a great windstorm arose, and the waves beat into the boat,
so that it was already filling.
But He was in the stern, asleep on a pillow.
And they awoke Him and said to Him,
“Teacher, do You not care that we are perishing?”
Then He arose and rebuked the wind, and said to the sea,
“Peace, be still!” And the wind ceased and there was a great calm.
But He said to them, “Why are you so fearful?
How is it that you have no faith?”
And they feared exceedingly, and said to one another,
“Who can this be, that even the wind and the sea obey Him!”

It must have been some storm to terrify these fishermen, whose lives had been shaped by a rugged livelihood in these very waters. They had fared through many storms and knew well the signs in the heavens and in the waters. They knew when to sail through and when to head for shore. This time, it was different. Neither sailing nor shore were possible, sinking was inevitable.

And, while these manly men were facing their terrifying trauma, their leader was sound asleep. 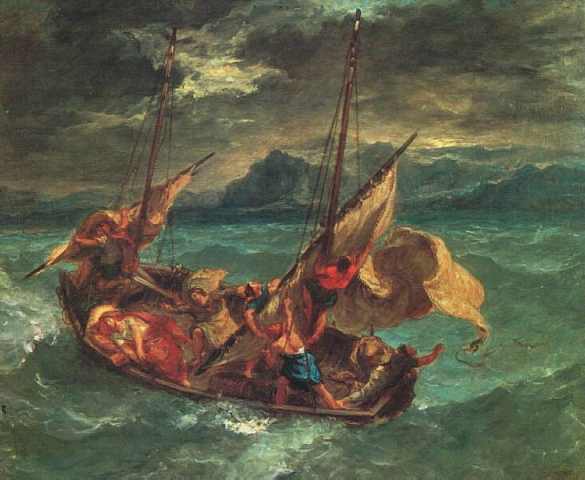 They had fear, not faith. They only saw physically. They couldn’t fathom  that the Hands that had measured the waters, were equally as capable of calming them. They didn’t know that His sleep wasn’t one of helplessness and indifference to their plight, it was a peaceful sleep of testing their faith; He was in control.

It is easy for us to read this and wonder why these men were terrified. They had the Savior in the boat with them! Sometimes We read the Scriptures and criticize the failings of His followers, but we might not be as quick to identify our own failings.

How often have we cried out with our troubled hearts, minds and bodies, “Do You not care that we are perishing?”

We feel as though there must be some mistake, that our Savior must be sleeping on a pillow of indifference, He must be ignorant of the heavy burdens on us. He must not care that our suffering is more than we think we can bear. It is OUR weakness that causes us to wrongly accuse the Savior of ignorance or indifference.

Using human reasoning, we might feel we don’t deserve suffering. What do we really deserve? If we deserved only the amount of suffering equal to the sins we have committed, including sins of commission and sins of omission, then shouldn’t we all be suffering much, much more?

But, in spiritual reasoning there is not a balance weighing suffering against sins, just a wise and loving Heavenly Father who is carefully and righteously causing and allowing storms in our lives.

He longs to increase our faith, which is more precious than gold. He longs to bring us to His bosom, clinging in confidence, as the waves swell. He longs to see us rest in faith, so that He doesn’t have to chide us, “How is it that you have no faith?”

He wants us to have peace and sleep in faith through the storms, resting on a pillow of faith.