Beka had been saving her money for a long, long time. 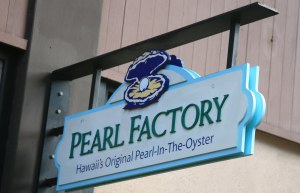 Once we got to Hawaii,
she had her heart set on buying an oyster
and digging out the pearl.
These are farm raised oysters,
imbedded with a nucleus
to produce beautiful pearls. 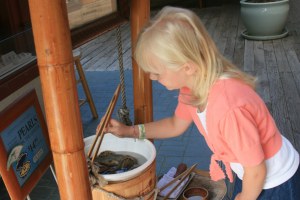 Beka was advised to pick out the ugliest oyster. 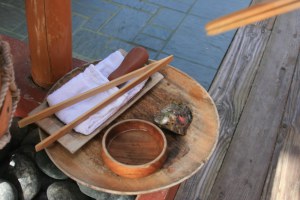 It is placed on the tray with the utinsels. 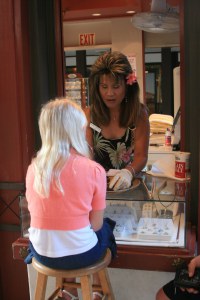 As Leslie pried the oyster open,
she explained the anatomy of the oyster. 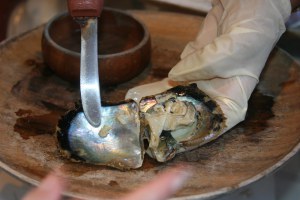 Leslie pointed out the mother-of-pearl interior,
which really is the mother of the baby pearl.
The substance secreted by the mantle
surrounds the nucleus to form the pearl. 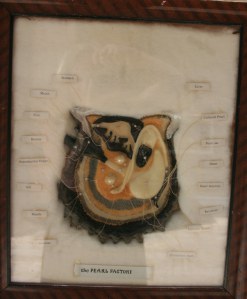 Oysters even have an elimination system.
We never thought about that matter. 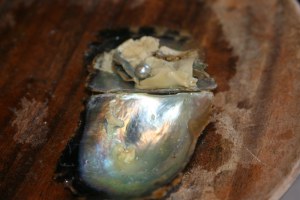 Leslie was SO surprised that Beka had a blue pearl.
She told us they are very rare,
and that it stands for wisdom.
She cleaned it with salt, polished it, and glued in into the setting. 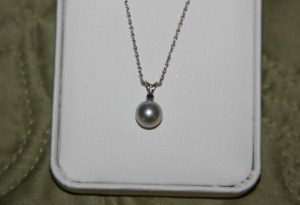 Beka chose a necklace with her September birthstone,
a sapphire. 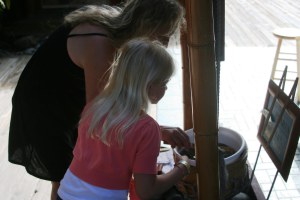 Mommy needed some guidance in picking out
the ugliest oyster. 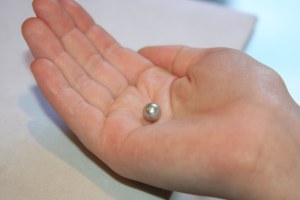 Surprise!
Another blue pearl,
for a woman who prays for wisdom.
We were also told it was a female.
Is that true, or just something they tell tourists? 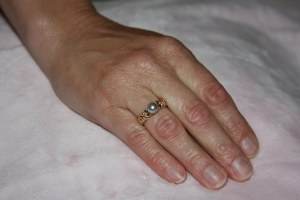 I chose to have it set in a beautiful ring. 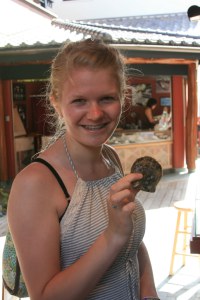 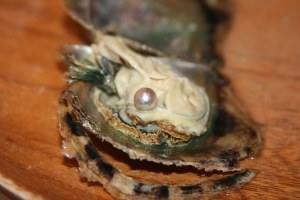 Another blue pearl.
By now we were teasing Leslie about being like a used car salesman.
She assured us blue pearls WERE really rare,
and she doesn’t often see one,
let alone three in a row.
Beth had her pearl set in the same necklace Beka chose. 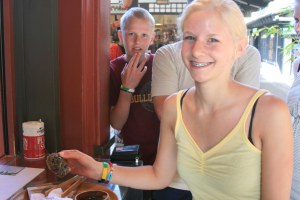 Grace was up next. 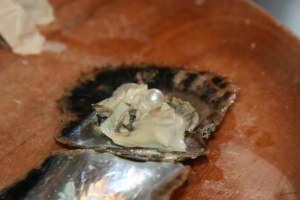 A white pearl, with a green tinge.
She didn’t want it set in jewelry,
because she isn’t much of a jewelry wearer.
We begged her to choose a setting,
but couldn’t get her to change her mind.
Don’t usually teenagers beg for things, not refuse them? 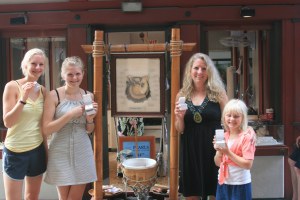 The end of our special no-sea-diving-pearl-hunting excursion.
We are holding our jewelry boxes,
Grace is holding her little ziploc bag.
And since Daddy paid for the jewelry,
Beka is still holding onto her money.
As always,
there are shadows of the Lord Jesus everywhere.
Matthew 13:46
Who, when he had found
one pearl of great price,
went and sold all that he had,
and bought it.
From Bill MacDonald’s Believers Bible Commentary of the New Testament:
“We rather believer that the merchant is the Lord Jesus.
The pearl of great price is the church.
At calvary He sold all that He had
to buy this pearl.
Just as a pearl is formed inside an oyster
through suffering caused by irritation,
so the church was formed through the
piercing and wounding of the body of the Savior.
As I look at my hand often during the day,
admiring my pearl,
it is more than just a reminder of a loving husband
who purchased it for me.
I am reminded of the purchase of my soul
through the death of the Lord Jesus Christ.
His church –
is the Pearl of Great Price.
Share
Pin
Tweet
Email
Print