If there is one thing my husband has learned about me during nearly 24 years of marriage, I don’t like learning something new….on my own….with directions I have to read.  I like big pictures, small words.  Early in our marriage he surprised me and bought me a serger.  I loved to sew  adorable matching outfits for the kids and he thought having four threads, two needles and a blade to cut the fabric as I sewed would make my life easier.
I thought it was a great idea, but I was terrified to try to learn how to use the machine.  After several months and the serger was STILL in the box, he quietly told me he could take it back to the store if I didn’t like it.  I MADE myself learn how to use it.
Saturday, he bought me a new sewing machine.  The one I referred to as my “new” machine was about 15 years old, and had several major things wrong with it. The repairs were going to cost more than a new machine. 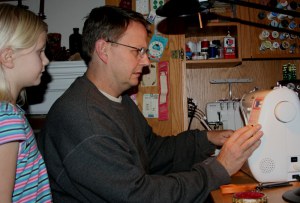 Knowing he needed to walk me through this major change, he decided to thread the machine for me.
Beka is SEW excited, because she knows she is going to learn how to sew this year.  We’ll be working on Christmas presents together. 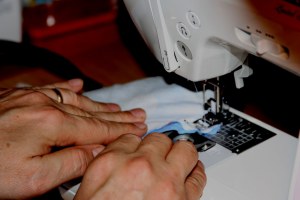 Daddy had to grab a piece of fabric and check the tension and the  stitches. We also discovered it has three speeds, and the top speed is FINALLY fast enough for the speed I like to sew.  Yes, more power! 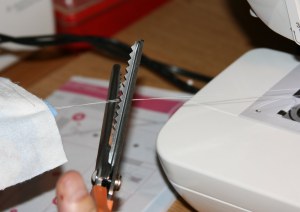 He grabbed the first scissors he could find to cut the thread. 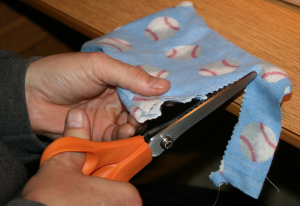 After laughing, he decided to go with it and added the pinked edge to the top of his creation. 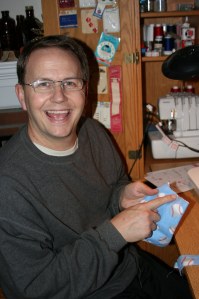 When I asked him what it was, he said, “It doesn’t matter what it is, I MADE IT!”

I might have to wrap it up and use it for someone’s Christmas gift.  If I don’t, I’m afraid it will find its way into my stocking.

Happily, tomorrow, we begin to SEW for school. Beka is making a doll blanket, and I will begin Christmas presents.

Do you think my kids are too old for matching outfits?