A paradox in parenting is that the one who teaches eventually gets schooled.

I spent years teaching my six kids to dress themselves. I rescued little heads stuck in armholes, re-adjusted two legs stuck mermaid style in one pant-leg, and released hair from buttons and zippers. I cheered as they mastered buttons, zippers, Velcro, and drawstrings.  I’ll never forget the relief and joy when three of my children could put on their own pajamas at night.

After a few years we were one big happy family, all able to fully dress ourselves.

Then they became teenagers and the education began anew. It was no longer how but what that mattered.

My skillset was seriously scrutinized. The fact that I can zip zippers, snap snaps, and button buttons was no longer good enough. Nobody was impressed that  I no longer get my head stuck in an armhole or try to put both legs into the same pant leg of my jeans. Well, I almost didn’t make it out of a Target dressing room alive after trying to remove a too-small Spandex tank top that got stuck over my head with my arms straight up in the air, but that was only once.

Now dressing in the morning puts me in a tizzy if I have to go out in public, especially if I am going to be with my lovely daughters. 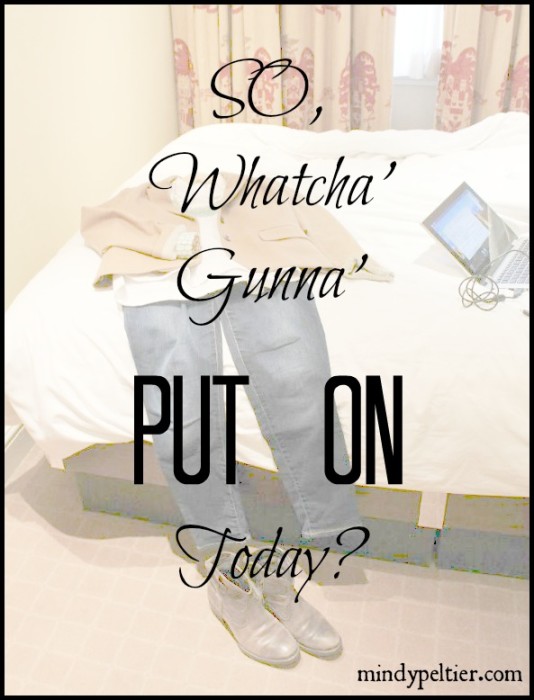 I’ve learned to seek my daughters’ advice, especially if I dared shop on my own. Before a trip or a writers conference I have one or more of my daughters help me prepare outfits, complete with shoes and jewelry. This is one of the pre-approved outfits I wore on a recent trip to London.

But, the issue goes deeper than the how to and what to wear.  Our clothing speaks a message. It reveals how we feel and/or what we’re trying to tell others.

A Hawaiian shirt says, “I’m in Hawaii so I have to dress like I’m in Hawaii” or “I wish I were in Hawaii.”

A dress says many things.

“I want to feel feminine.”

I’m not the only adult who doesn’t know the rules about what to wear. Last winter hubby and I were invited to a black tie event. Yea, rednecks going black tie, I thought you’d find that humorous. Hubby thought he’d dress up and wear khakis.

Despite numerous Bing searches to prove my supposed theory that he needed a suit or a tux,   Mr. P didn’t believe me. Being the loyal wife I am, I told him I wouldn’t go if he didn’t dress right. OK, it was bad enough I had to buy a formal dress and do my fingernails and toenails in the same week, but I also had to learn to breathe in the spandex thing I wore under my evening gown, while balancing on ridiculously high heels.

I wasn’t going through that torture if he wasn’t going to look like we actually belonged there. After checking with a female colleague who was equally aghast at his desire to wear khakis, he caved and rented a tux. 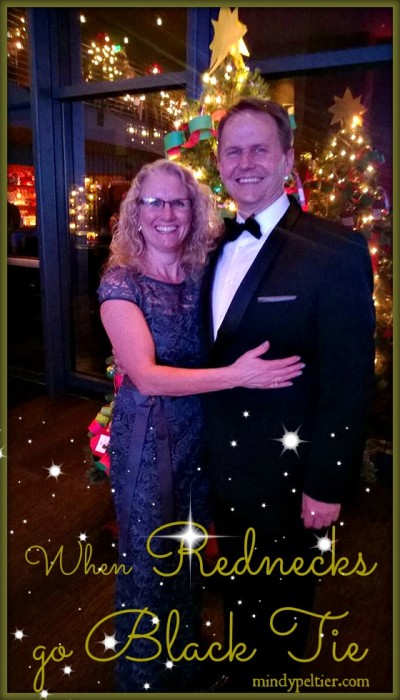 Because I was right. And Mr. P admitted it, which made the victory all the sweeter. We actually had fun and he was thankful he wasn’t embarrassed by being inappropriately dressed. And no, he won’t mind me telling on him. In our next career we’ll be  comedians so we can make fun of each other and get paid.

There’s another little secret I have to admit, sometimes I purposely overdress just a tish. Last summer I was going to a potluck picnic family reunion for the outlaws  in-laws. We hadn’t been back for almost ten years, not since I was wearing a baby on each hip and urp on my shirt, so I wanted to look good. I bought a summery lace dress and wore it with floral adorned flip-flops and a jean jacket.

Yep, that decision about what to put on each morning is an important one.

One that the Lord is even concerned about.

No, I’m not one of those skirt-wearing Christians ready to start measuring hemlines. In fact, I’m the opposite. Years ago I was asked to not return to a homeschool group after showing up in a black t-shirt and holey jeans. My spirituality was measured by my outward appearance and not by what I was studying in the Scriptures. They made it about my jeans, not my Jesus.

Since I became a Christian at 18 I’ve been told I shouldn’t wear jeans, shorts, swimming suits, sleeveless shirts, nail polish, pierced earrings, dangly earrings, make-up, t-shirts with words on them, high heels, and hair coloring. I’m into modesty, because the Lord is, but  He doesn’t have a dress code in mind, He has a heart code.  It’s not what you put on the body that makes you holy, it’s what you put on the heart.

In other words, my holey jeans didn’t make me unholy.

This is what the Lord tells us to put on in the Bible. (Hover over each phrase to read the verse.)

And He’s just getting started with the list of what we should be wearing each day as a big-girl/big-boy Christians who should know how to dress ourselves. 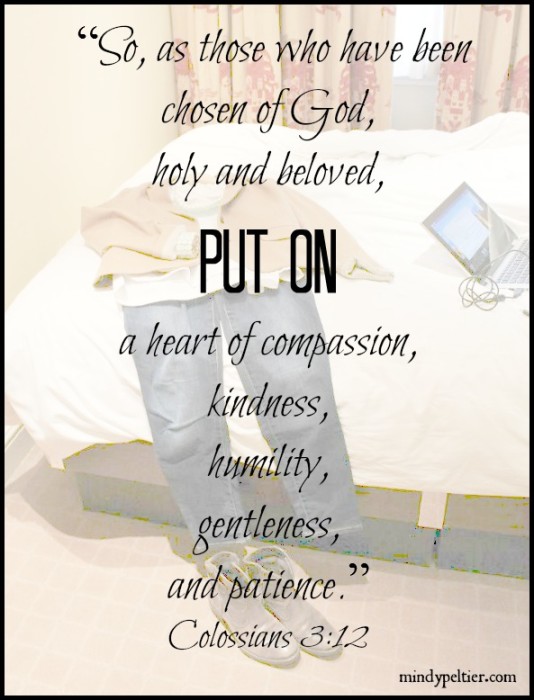 We are much better clothed  if we put on what the Lord asks us to put on instead of following the dress code of controlling and critical Christians.

A heart of compassion ministers more to a hurting soul than a lengthy hemline.

Kindness preaches a message that a wordless t-shirt can’t.

Humility offers your life as a servant, not as a Christian clothing model.

Gentleness is better to correct an ill-taught or unbelieving woman who’s showing too much skin than a sharp rebuke or an averting disdain.

Patience is best worn when in a crowd of Christians who will never see eye-to-eye on any topic under the sun.

So, whatcha’ gunna’ put on today?

Previous Post: « Details Matter In Photography and Life
Next Post: When the Straw Breaks the Camel’s Back »