I have often heard that teenagers need more sleep than infants.
Experts rank their need at a minimum of 9 hours,
and a maximum of about 11.
Let’s choose ten hours, a nice round number,
right in the middle of the varied expert opinions.
If they go to bed at 10, they should sleep until 8am.
If you want to get them up at 7am,
you’d have to put them to bed at 9pm.
Yea, right.  My second grader hardly gets to bed by 9pm,
I can’t imagine trying to  get the teens to bed this early.
I don’t even want to go to bed this early!
I have now been the mother of teenagers for over ten years,
totally agree and understand this need for sleep.
After a few years of struggling against the tide,
I realized if I let them sleep in a little longer,
they worked harder and were done earlier with school.
The earlier they started, the longer it took.
I decided instead of just studying about how many hours of sleep they needed,
we would count it Health class and make sure they were getting enough sleep.
Even as I say this, I feel like I have to defend myself as a
homeschooling Mom who decides to swim against the current.
I felt bad, knowing the public high school kids started much earlier,
until I read articles  like this one about how these students struggled.

“The eyes are open, but the brains are asleep,” says Mary Carskadon, director of chronobiology at E.P. Bradley Hospital in Rhode Island and a professor in the psychology and human behavior department at Brown University School of Medicine. “This (8am class) is not a time of day when teenagers can be reasonably expected to participate in class.”

So, I can cast out my guilt, and let my teens sleep in to a reasonable time as needed. 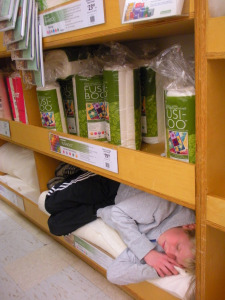 (taken at a fabric store)
Cuz teens need more sleep than babies, ya’ know.
*****
Psalm 4:8
I will both lie down in peace, and sleep;
For You alone, O LORD, make me dwell in safety.
Share
Pin
Tweet
Email
Print