Last Tuesday I learned how loud silence can be.

My house was empty.

After 30 years of parenting, 20 of those years homeschooling, the Lord led us to enroll our last and only child at home in private Christian school. Homeschooling was an amazing adventure when all kids were home, but when they grew up and moved out, our home changed. I didn’t want our daughter to stare at her mom across the dining room table all through junior and senior high school. It was the end of a beloved era. 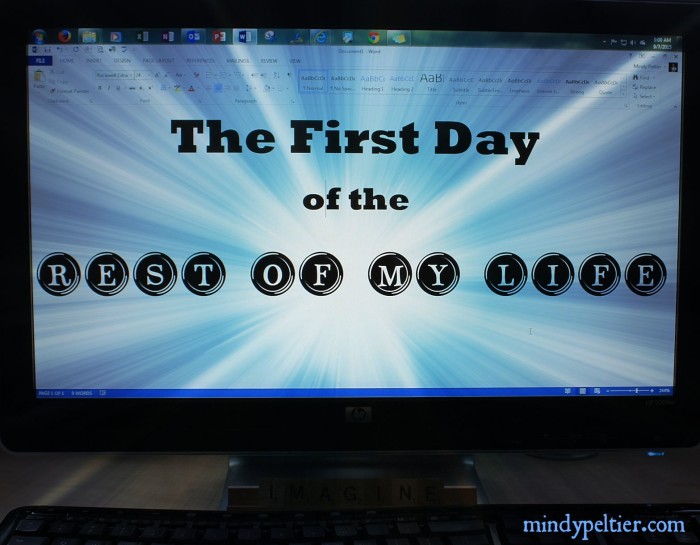 I miss the five kids that have moved out.  I miss their laughter, singing,  piano playing (including the frustrated hand-slamming on the keys signature to one of my kids), the giggle-fits, footsteps, stomping up and down the stairs, the front door slam that shakes the whole house, the toys, the games, the adventures, and even the fight over the favorite spoon. They were our life. They were our joy. They were our #1 hobby.

They grew up too fast. I heard older women say this but in my sleep-deprived, puke-wearing, kid-on-each-hip stage of life I couldn’t even fathom them all being able to wipe themselves, let alone dare grow up and move out. The women were right. In a blink child-rearing came and went.

Hubby and I saw the emptiness approaching, along with a need for a life change. We knew we would always miss the kids,  but we needed to finish strong with the last child, and reinvent all of our changing lives.

Our theme word for this new stage is “THRIVE.” The theme for their teenage years was “SURVIVE” so you might see a pattern here.

A teenage dream, a dream I dared publish in my newspaper column,  has been to write a novel. A dream I intentionally and willingly set aside for the #1 desire of my life, to raise six kids.

In Anne of Green Gables, Anne gives up her personal plans when Matthew dies and Marilla needs help on the farm. When Marilla later hires help she tells Anne, “It’s time to dust off some of your ambitions.”

Anne replies, “I feel as though someone’s handed me the moon… and I don’t exactly know what to do with it. ”

I know what I want to do with the moon over my new horizon. These are the same goals I’ve had for the past few years, but now I have all day, not random time slots here and there.

And we were off to our new adventure.

The house was empty, the nothingness echoing on the walls. I could hear my own footsteps, my own breathing, and my own rustling in my chair and in the cupboards.

It was so quiet I could hear myself think. Contrast those years when I would imitate my mother, also the awesome mom of six kids, and yell at the rambunctious tow-heads, “It’s so noisy I can’t hear myself think!”

The day passed quickly. I worked on a few scenes from WIP and wrote about 500 new words.

My biggest challenge won’t be finishing my novel. It will be learning to be alone so I can finish my novel. And staying on task instead of scraping gunk off the sink stopper, picking lint out of the dryer vents, or stacking my towels in alphabetical order.

The world is very thankful because one of me is enough, thank you very much. Having introverted writer friends comes in handy. At least I have some understanding of what she feels like.  I told her she didn’t have to introduce herself to 20 people like I would, that one would be good enough. Just one. And I gave her the introvert’s secret weapon, the smile. If you aren’t engaging in the conversation, stand with a small smile so you look welcoming and friendly, not stuck-up.

The good news is, the kids at the school are either like me or they took their parents’ awesome advice, because on her first day of school at least five kids came up and introduced themselves to her.

Mr. P. and I are adjusting to being married with one child, not married with a house full of them. We have more time together because we aren’t buying two carts of groceries, keeping six growing kids in  clothes and shoes, and doing 2-3 loads of laundry a day. (follow our marital adventures with Facebook hashtag #MarriedtoMrP)

Yes, on the first day of the rest of my life I was given the moon.

And I know what to do with it.