There’s nothing boringer (I like to make up my own words, sometimes, rather than just using everyone else’s)  than looking through someone else’s vacation pics, right?

That’s part of the reason I put off blogging about Amsterdam for so long.  My intent isn’t to make you jealous about what a great life I have, it’s to show you how the Lord ministered to my heart.

I have to admit that for the past year I have mumbled on occasion, “Nothing GOOD ever happens to ME!”

I know, what a whiner.  My heart has been broken over and over again by the deaths of people I dearly loved.  Someone very dear to us, The Innocent Man,  was falsely accused of a crime and sentenced to 8 years in prison, 10 years on probation.  I’m permanently scarred from watching the him being shackled and hauled away without even being able to say good-bye or give one last hug.  My health has been stable, but the thyroid cancer is still there, lurking.

The list could go on, but you all have your own lists, don’t you?  Burdens  weigh down our hearts so  we have a hard time believing we have a Faithful and Loving Father. The ugliness around can dull our hearts to the beauty of having a personal Savior.  Still, I daily fight to live my belief that shivers beneath the burdens,  “God is good all the time.”

I’d also been recently made aware that fear can cripple me, to the point where I don’t  do what I want to do. Not trying has been easier than failing. When the trip to Amsterdam came up, it was more than just a trip to Europe.

At one point before the trip, I cried a little.  Why would I leave my kids?  Why would I travel to a place where pot and prostitution are legal? What if something really bad happened?  I prayed and my hubby tried to encourage me, but he can’t relate.  He’s not afraid of anything.  After I conquered those fears of going all by myself, I busied myself with shopping and packing. We arrived and learned our first important travel lessons. What kind of woman wouldn’t be jumping for joy excited about going overseas?

I spent the first day in the hotel room, unpacking, ironing, making sure hubby was ready for his responsibilities. OK, I was trying to muster up courage to follow through, too.  I ventured into the nearby mall and train station to plot my course, pretended I understood the train map,  and fanned my simmering coals of determination.

Then, it was all about me. 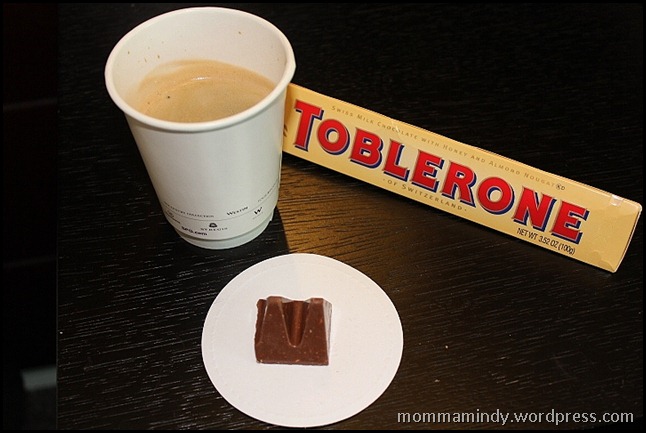 There’s a quote about an army marching on it’s stomach, so I figured if I was gunna’ march around Amsterdam in my new Born shoes, I better eat breakfast.

I put on my new clothes, my new comfortable shoes, lightened the weight of my awesome purple purse, and I was off and running. There are so many museums and art galleries in Amsterdam, you could live there a lifetime and not experience it all.  You could just sit on one bench and feast on the sights around you and be content.  Or you can walk as fast as you can, like I did, and take as many pictures as you can, like I did, and try to accomplish everything in two days. I will show photo galleries later, today I want to show you how the Lord spoke His love me for.

After wandering around Amsterdam for hours taking pictures and breathing in the sensations of history, I start wandering away from Dam Square, following the canals.  At this point, I was feeling reckless. Even though my cell phone didn’t work and my credit cards didn’t work, and I had only about 20 euro with me, I figured if I got lost, someone would find me or help me or something.

I spotted an enticing doorway. 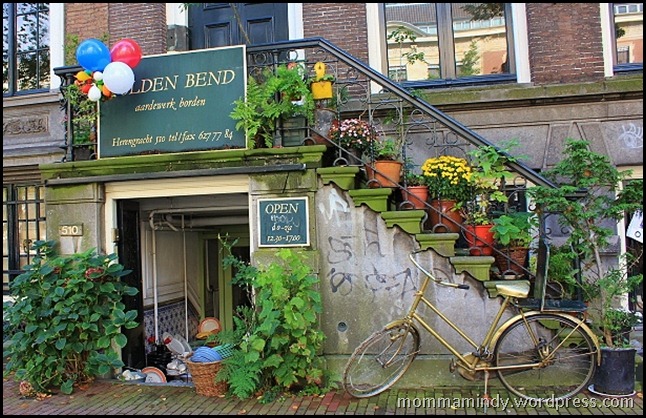 Look closely?  See the entrance? Dishes. Anybody that knows me personally, knows I love dishes. I pert near was drooling. The Golden Bend Tableware shop, which happens to specialize in dishes from two of my favorite companies, Syracuse China and Homer Laughlin.  Of course, I prefer the vintage models, but I was still thrilled to find this little spot. 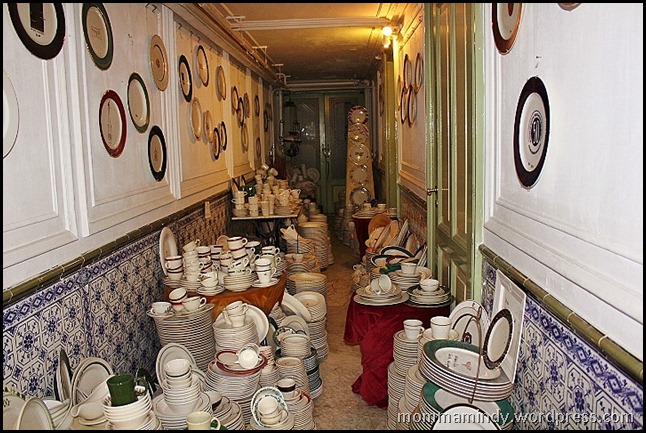 With my huge purple purse, the hallway was dangerous.  But, I bulled my way in. 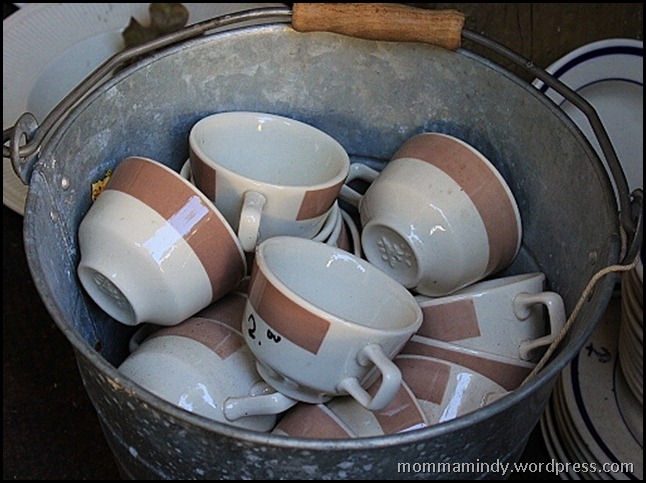 I coulda’ bought the whole bucket, but my suitcase was 49 pounds already. 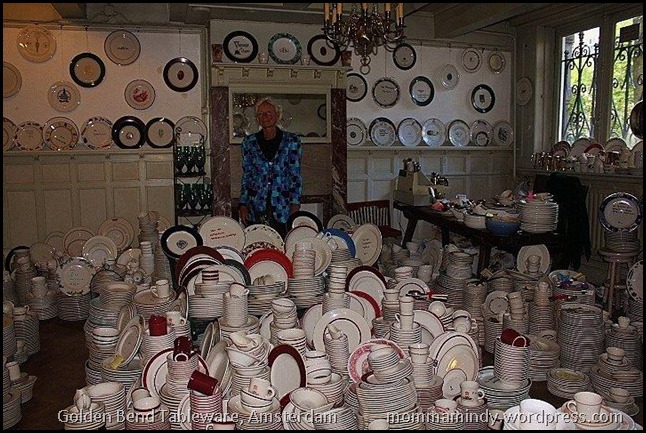 Dishes, dishes, everywhere.  I bought two Syracuse coffee mugs in one of my patterns for Scott and I to use in nostalgic , romantic memories.  OK, we never get up at the same time, and we never drink coffee at the same time, but maybe someday, we will.  While visiting with Dorothy, the owner and fellow dish lover, I wistfully mentioned that I really wanted to find a thrift store.  She looked up with  surprise and said, “There’s one just around the corner.”  Now, I really didn’t care if I was going to get lost or not.  I HAD to get to that thrift store. 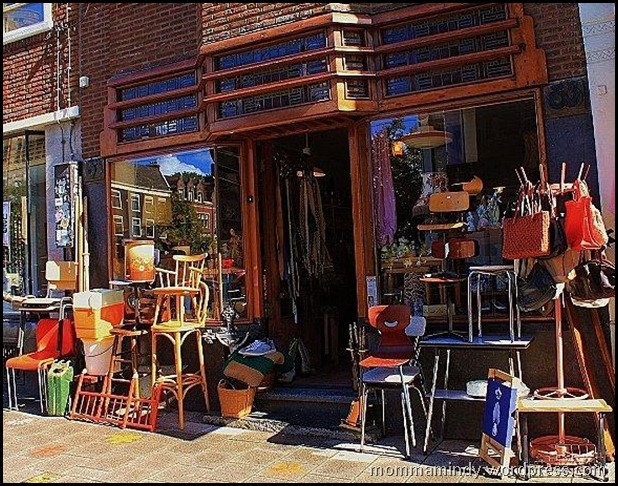 Aahhh.  doesn’t it just look delicious?  I won’t bore you with details of all the treasures inside, and I can’t tell you the name because there wasn’t a sign, but if you come to Amsterdam with me, I’ll walk ya’ right to it. The owner, Arie, wasn’t in, but his worker wrote down the address for me.  Overtoom 532, 1054 Amsterdam, Holland. I want to send him a Hans Brinker book to promote a marketing strategy to Americans. 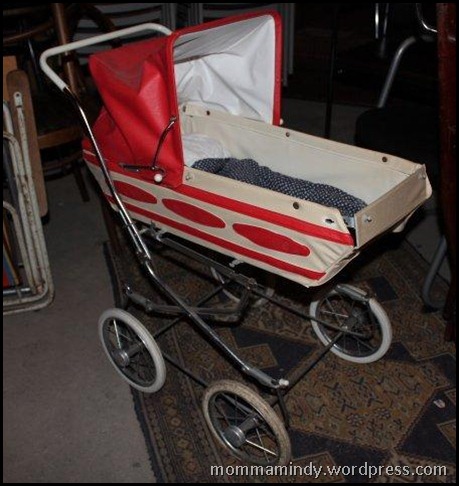 What I would have bought if I could fit it in my suitcase. 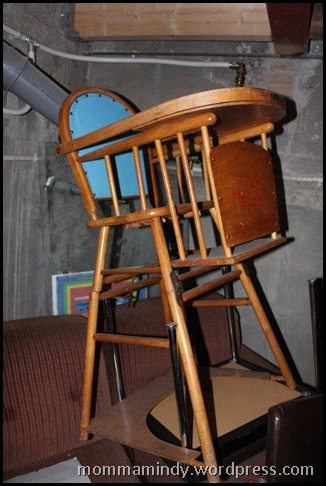 Or this.  Wouldn’t it look adorable with my grandkids in it.

What I bought had to fit in a suitcase that only had room for one more pound, or in a bag I carried home.  When you don’t see something on the surface, dig deeper. In a second hand store, it sometimes means getting your fingernails dirty, or crouching down to explore under a table. Under a table,  I found the Treasure of all Treasures. 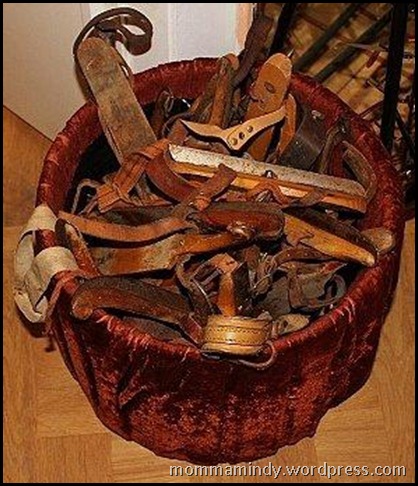 Hans Brinker skates.  I was so excited I might have wet my pants if I’d been drinking my daily allotment of water.  But, remember, I’m in Amsterdam where there are no potties, so I wasn’t drinking.  If you pinched me, my skin would stick together for an hour, but at least I was ready for this moment of more excitement than an ol’ woman could handle.

As I squealed and stammered I kept saying, “Hans Brinker, Hans Brinker.”  Even though her English was way better than my non-existent Dutch,  the clerk had no clue.  I had a DUH! moment.  The book was printed in America about Holland, they hadn’t grown up reading it. Wasn’t I silly to expect her to know who Hans Brinker was? The skates were only 5 euro a pair, and she enthusiastically helped me dig through the box and a basket   to find the oldest pairs.  I told her Americans would go crazy for these skates and she needed to charge more and hang them in the window, after I bought mine for the lower price, of course.  Not sure if she took my suggestion seriously, but she was very nice to this crazy American tourist.

I also purchased two vintage tins, because I collect tins.  I’ve seen enough sombreros, maracas and wooden shoes at garage sales to know  I wanted to purchase keepsakes worth keeping a lifetime.  Earlier I’d found a few miniatures  for my printer’s shelf, so I was good to go. 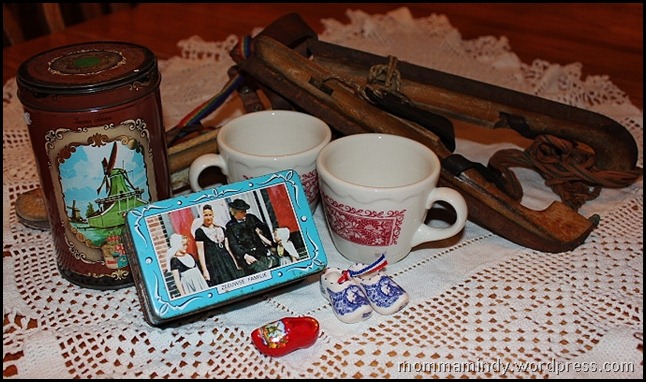 Souvenirs couldn’t be any sweeter, could they?

But, the blessings weren’t over.

I had a little time left before I met the hubby and business associates for dinner, and was casually wandering the streets towards the train station, when I spotted THE MUSEUM. I had 30 minutes before closing and I HAD to use the WC.   Photography was allowed, so I started running through the  museum taking pics of the displays and the description cards, for later research.  After a few minutes, I wanted to lay on the ground and weep in worship.

It was a Roman Empire display and I was seeing items I had only read about for the past twelve years.  A historical fiction  book has been burning in my heart and mind but I haven’t written because I don’t know enough about the Roman lifestyle during the time of Christ.  I’ve read books and watched movies and listened to college lectures, but I hadn’t pushed through, because that’s what I do.  Remember my fear of failure? 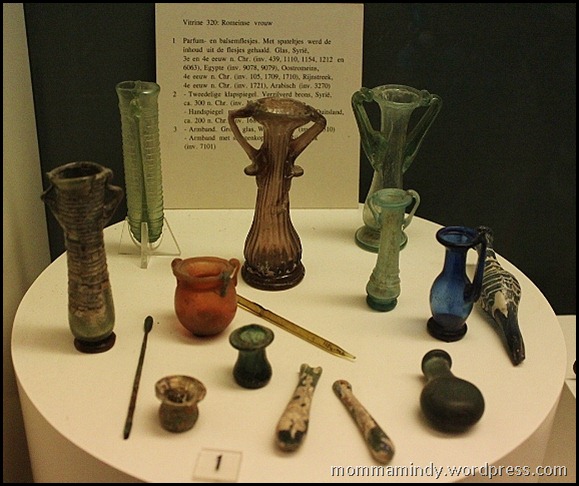 It felt like I personally was the one who unearthed the treasures from their burial in time, the feeling of discovery was so intense.

It was a holy moment, because the Lord met me there.  Each item spoke of His infinite love and care for me. 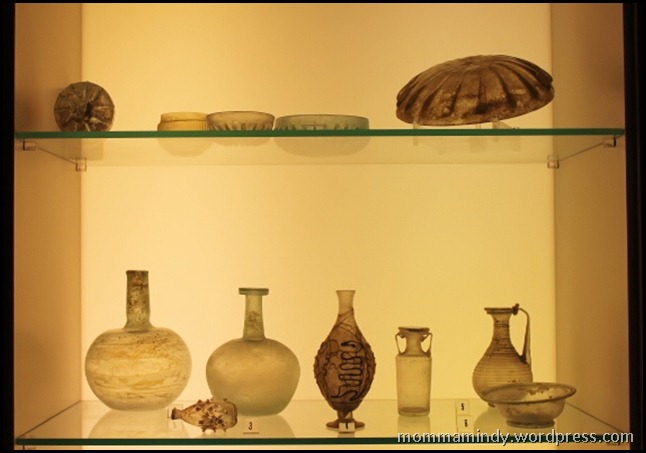 I was reminded that those concerns of my heart are concerns of His heart, and that even though He didn’t have to prove His love to me, He did. 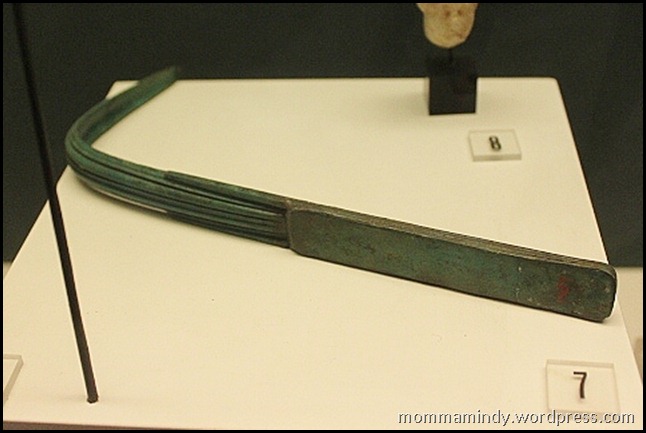 So THAT’S what a strigil looks like? Words in books were coming alive. 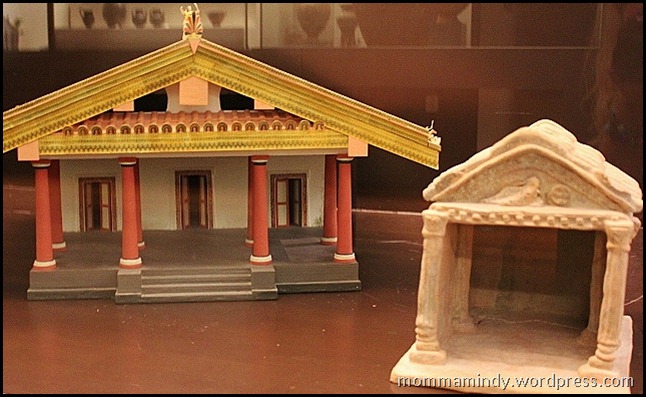 My homeschool mommy wheels were churning, what if we lived through the Roman Empire next year the way we’re living through the Homesteading era now with Little House on the Prairie books?  Wouldn’t it be fun to make a Roman doll house?  Actually, I’ve always wanted to do that, seeing these things in person made the dream a more possible reality.

It’s easier to write about something when you’ve seen it.  When I got to this part of the display, an older gentleman in the doorway kept telling me to leave because they all wanted to go home. Since my home was a lot farther away than his, and I knew I wouldn’t be back again, I walked as slowly as I could,  taking as many pics as I could. 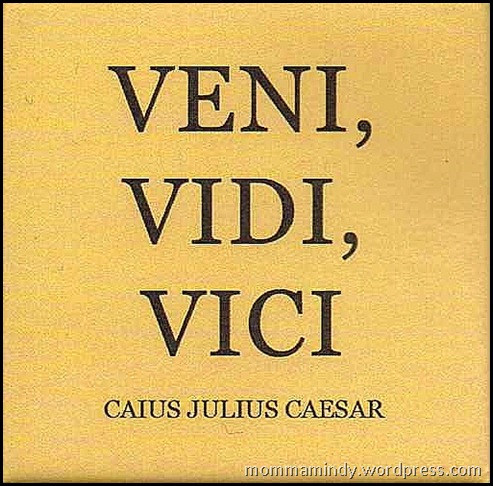 The final perfect souvenir of the perfect day from the museum store.

Without a map or a plan, the Lord drew me to my three favorite loves in a city I’d never been to before. I was overcome with His tender love for me.  With the help from the Lord ~